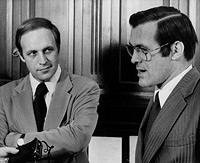 Defense Secretary Donald Rumsfeld and Vice President Dick Cheney are two of the administration’s biggest proponents for contracting out government to the private sector, and it’s an experiment that they began early in their careers—with questionable results.

In 1969, President Richard Nixon appointed Rumsfeld, a 37-year-old congressman from Illinois, to head the Office of Economic Opportunity, which was responsible for overseeing the War on
Poverty. Nixon wanted the agency restructured, and Rumsfeld, with the assistance of his chief aide, Cheney, quickly began bringing in management contractors to do the work of the agency’s top
civil servants.

In The Shadow Government, a 1976 book about the federal consulting industry, Daniel Guttman and Barry Willner quote Cheney as saying, “Don found himself with a bureaucracy that hated him…. [He] was forced to seek outside help. I remember Don reciting to me the Al Smith statement, ‘If I don’t look to my friends for help, who do I look to, my enemies?'”

Rumsfeld relied on two consulting firms, Booz Allen Hamilton and Arthur Andersen, to design the reorganization. According to Guttman and Willner’s book, the consultants moved into rooms
near Rumsfeld’s office and began interviewing more than 100 employees and making recommendations about who should be sidelined. Although civil service rules prevented Rumsfeld from mass firings of the agency’s employees, he could take away most of their responsibilities. Indeed, when Rumsfeld released a new agency telephone directory, it no longer had listings for 108 government employees, including more than 70 senior managers, some of whom were left without desks and wandered the agency’s
halls without any purpose.

According to the book, Rumsfeld even used Paul Anderson, a Booz Allen consultant on leave as a White House fellow, to be one of his top advisers and his gatekeeper, fending off agency workers
who wanted to meet with him. Anderson actually awarded the contract to Booz Allen on Rumsfeld’s behalf. When Anderson then returned to the consulting firm, he said, he moved seamlessly from being a federal employee back to being a government contractor. “No one knew that my status had changed,” he explained at the time. At Anderson’s recommendation, the agency decreased its budget for poverty programs and increased the budget for hiring more management consultants.

Guttman and Willner contend that Rumsfeld’s use of the contractors skirted the law. Only government officials—not contractors—are allowed to make policy decisions. At Rumsfeld’s Office of Economic Opportunity, the authors note, it was sometimes difficult to tell the difference between an “official decision” and a “consultant’s recommendation.”

Rumsfeld’s successor at the agency was Frank Carlucci, who later became Ronald Reagan’s Defense secretary. In 1971, Carlucci told Congress that he was dramatically curtailing the agency’s
spending on management contractors, which amounted to $110 million between 1965 and 1971. “We did not think we were getting our money’s worth,” Carlucci testified.