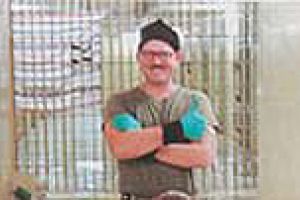 The soldiers in this photograph will be brought to a military court. If convicted they will serve time in a military prison. Should they be in danger of forgetting any of this, their superiors will happily remind them.

Nothing in this picture is more telling than the upraised thumb of the standing soldier. Everything else in the picture is subsumed in that thumb. Much else is subsumed there also: the gusto of the beer commercial, the gung-ho posture of the action film, the vulgarity of a hundred in-your-face bumper-stickers, the jingoistic rhetoric of a thousand September 11th commemorations—the whole rah-rah, “go for it” attitude of the self-styled American ace.

We are told that a thumbs-up meant mercy for the fallen in Roman gladiatorial contests. Other authorities say it meant death. In America it means that mercy and death are up to us. Because either you’re with us or against us. Because we’re number one.

We are told that this picture is an affront to the values of our nation. Is that so? Presumably we are talking about the values of a nation that hires its poorest citizens to do its dirtiest jobs, that sends military recruiters to inner city slums and depressed rural towns—and then is appalled to see images that might have been captured in a back alley or a trailer park.

When you first saw this picture, didn’t you register at least a twinge of patrician revulsion at these rednecks, at this trash? It is so hard to find good help these days.

It comes down to modesty. A modesty incumbent on men and women, though not equally incumbent. It is not “backwardness” or “fanaticism” or “terrorism” that so appalls us about these people but their modesty. These guys are not even supposed to see each other’s dicks—an insufferable affront to the land of the hacker, the memoir monger, the reality show, the all-presuming camera, the mandatory drug test. The Patriot Act. The soldiers on trial might well enter a plea of cultural self-defense.

Modesty is a lot like money: we tend to detest anyone who has more or less of it than we do. The naked aborigine and the veiled villager, the nudist and the nun, are equally offensive. The story of western imperialism is essentially a game of dolls; we dress the natives and undress them in a rage. Think of the guys in hoods as a pile of Barbies.

Biblical scholars suggest that one reason for the ancient Hebraic intolerance of “sodomy” was the ancient Canaanite practice of sodomizing prisoners of war. President Bush wants a Constitutional amendment restricting marriage to “a man and a woman.” One wants to know, “What are these right-wingers so afraid of?” Uncannily, their war recapitulates the historical roots of their fear. This is what they are afraid of.

Throughout the entire post-feminist era we have been coyly deconstructing the essential egalitarian insight of the women’s movement with a lot of Mars-Venus, He-said-She-said preciousness. We believe in biological determinism more than Muslims believe in the Qu’ran.

We have executed the same sly steps in regard to racial stereotyping. We have hiphopped our way from Malcolm X back to the imagery of Birth of a Nation. So long as you spell it n-i-g-g-a.

Just tell me one thing: Is the photograph a “guy pic” or a “chick pic”?

You will say, “A picture like this will make people sick of war.” You will be wrong. The seeds of war are already planted in our response to this picture. This horrible injustice, this beast—this thing that we always locate outside of our individual selves, never within—it must be annihilated. Yes? The song that Rome is always singing: Carthage must be destroyed.

Nevertheless, the picture is its own argument for hope. A grim, provisional hope, to be sure, but is there any other kind? Someone felt compelled to take this photograph. Someone always does. That is why we have Watergate tapes and concentration camp snapshots and videos of frat house gang bangs. In short, why we have pornography.

We can run, but we can’t hide, for the simple reason that on some basic level we don’t want to hide. The milk of human kindness can be suppressed; but the sputum of human exhibitionism must forever be expressed. Even when pity is in short supply, we will never run out of truth.

Listen to the audio version of this essay here.

Garret Keizer is the author of God of Beer, No Place But Here, A Dresser of Sycamores, and The Enigma of Anger. His new book, Help: The Original Human Dilemma, will be published in September.