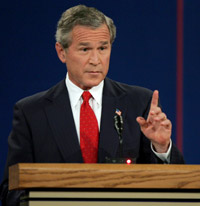 If 2000 was the year of the soccer mom, 2004 is the year for flip-flops: as fashion footwear, waving props (at the Republican convention) and taunting yells (at Bush rallies). This strategy was the brainchild of Karl Rove, Bush’s chief political strategist, who decided that the way for Bush to win was to destroy Kerry’s credibility and to attack his leadership qualities, largely by focusing on his alleged inconsistencies about the war in Iraq.

Rove’s flip-flop charges quickly became the mantra of the Republican National Committee and the GOP apparatchiks who feed sound bites to the broadcast media, especially the Fox News network; and the president made the flip-flop accusation the rhetorical staple of his stump speech.

It’s a measure of Rove’s skill in the dark arts of political spin — which he learned from Richard Nixon’s “dirty tricksters” of Watergate infamy — that the strategy has succeeded in obscuring two central facts about the presidential candidates: that Kerry’s positions have, in fact, been largely consistent; and that Bush, far from being the steady, conviction-driven leader of Republican imaginings, is by far the greater flip-flopper.
Rove succeeded because the news media fell for his flip-flop flim-flam. How else could Bush’s flip-flopping have become the best kept secret in American politics? This is remarkable, given the sheer quantity of examples. Here’s a partial list of Bush flip-flops, with their presumed motivations.

• Prescription drugs from Canada: For, then Against (Big campaign contributions from pharmaceutical corporations)
• Assault weapons in our streets: Against, then For (Pandering to the NRA and gun manufacturers)
• The creation of a homeland security agency: Against, then For (Public outcry and political expediency)
• McCain-Feingold campaign finance reform: Against, then For (Unprincipled opportunism)
• Nation-building: Against, then For (A double somersault to justify neocon invasion plans)
• Steel tariffs: Against, then For, then Against (A free-trader becomes a protectionist to win votes in Pennsylvania and Ohio)
• Arsenic in water: For, then Against (Public outcry…those darned scientists)
• Mandatory caps on carbon dioxide: For, then Against (The power of the coal and power companies)
• Outside investigation into WMD: Against, then For (Public outcry and world opinion)
• WMD: We found them and then we didn’t find them (Confusion, convenience and “flexibility”)
• Gay Marriage: First it’s an issue for the states and then a federal issue (An opportunistic, red-meat, divisive wedge issue)
• Osama bin Laden: In 2001 he was our No. 1 public enemy; in 2002, “I truly am not that concerned about him” (Failure to prosecute the real war against terror)
• North Korea’s nuclear threat: First it was extremely important; now it’s not much of a threat (A parry to divert attention from misplaced priorities)
• Cutting troops in Europe: Against, then For (Bad planning for the number of troops needed in Iraq and Afghanistan)
• Immigration reform: For liberalization, then Against (A conflict between wooing the Hispanic vote and angering his nativist base)
• AmeriCorps funding: For, then Against (A favorite target of congressional reactionaries)
• Patriot Act II: For, then Against (The need to appear more moderate in the middle of an election; even angered Republican civil libertarians)
• The 9/11 commission: Six flip-flops, Against and then For: 1) The creation of the commission; 2) the composition of the commission; 3) the extension to allow it to complete its work; 4) his testifying; 5) the testimony of his national security advisor; and finally 6) the implementation of the findings (Public outcry, particularly from the families of 9/11 victims and then commision members — Republicans and Democrats)
• The war in Iraq: At least nine different rationales as to why the U.S. invaded, and still counting (Reality catching up with fantasy)
• The war in Iraq: “It will be a cakewalk,” then, “It will be long and difficult.” (Talking out of both sides of the mouth; depending upon audience)

So much for Bush and his “steady leadership.” Kerry has been a model of consistency by comparison. On the Iraq war, his position is complex. It requires the ability to understand history and shifting circumstances. These are not exactly the strong suits of the White House and the mass media — particularly cable TV and the talk-radio ranters, two media that are notoriously serious about unserious issues, and unserious about serious issues.

The Bush spinmeisters wanted to undermine the simple truth that Kerry does understand history and complexity, particularly when it involves the most important decision that a president can make: that of taking our country to war, with all its drastic consequences in human lives and expenditure of national treasure.

Bush does not seem to understand that those who do not learn from history are condemned to make the same mistakes. Kerry seems to know a basic historical truth, that genuine international cooperation, multilateral force, and traditional alliances are absolutely essential to our nation’s well-being and security in a dangerous world of terrorism and nuclear proliferation.

If Kerry can be faulted, it is because he believed and trusted Mr. Bush — as did most Americans — when he voted for giving the president the latitude he needed to pursue all the necessay and viable diplomatic avenues before the Iraq invasion. Kerry then became convinced that Bush misled Congress and the American people by confusing the all-important war against terror with Bush’s own separate agenda of invading Iraq. Those were, and still are, two separate issues!

Saddam Hussein was a despicable tyrant, but overthrowing him and invading Iraq did not lessen the threat of terror; it increased it. It did not strengthen American military capability; it weakened it. It did not make Americans at home or abroad safer; it had the opposite effect of increasing recruitment for al Qaeda and other anti-American militant groups. Invading Iraq did not increase international cooperation for anti-terrorist efforts or the respect for America’s diplomatic leadership that is indispensable to the war on terror; it diminished them.
Both Franklin Roosevelt and Winston Churchill, in leading the victorious WWII allies in the war against fascism, understood the suffering, the human costs, and the scourge of war. They understood only too well the need for international cooperation, diplomatic and military. They understood the critical need for the exchange of intelligence and multinational action by and among traditional allies. They understood the need for strategic alliances that every single president since then, Republican and Democrat, has understood, with the glaring exception of Bush.

Roosevelt, before his death, was quite clear. He said that the United Nations was the place to go not to end wars, but to end the beginnings of wars. And Churchill was just as explicit when he warned us, “The United Nations is an imperfect institution that is a reflection of an imperfect world. Its purpose is not to lead us into an ascent to heaven but to prevent us from going into a descent to hell.” Those words are just as true today as they were in the aftermath of WWII. Kerry understands what they meant. Bush isn’t interested.

For the past 3 1/2 years I have listened carefully to the President and his chief advisors. All of it has reminded me of a passage in “The Heart of Darkness.” Joseph Conrad put it this way: “Their talk was the talk of sordid buccaneers: it was reckless without hardihood, greedy without audacity, and cruel without courage; there was not an atom of foresight … in the whole batch of them, and they did not seem aware these things are wanted for the work of the world.”

Conrad’s words capture the strategy of the Bush campaign and his four years in Washington; they reflect the mood and the moral nullity of the reactionary enterprise that seeks to tear apart the public good at home and to lead us into risky pre-emptive wars abroad. The Bush administration just doesn’t get it. No country can sustain itself, much less grow, on a political fare of one-liners, rerun ideas,
deliberate distortions, paranoia, and official policy pronouncements borrowed from Orwell’s “1984” – where recession is recovery, war is peace, and a social policy based on aggressive hostility is compassion.

In the final analysis, there are two disturbing realities about the 2004 presidential election campaign that should concern all Americans. The first is that Bush, not Kerry, is guilty of big-time flip-flopping. The second is that the mass media, through incompetence and a herd mentality, have missed this defining and crucial story. Bush’s flip-flopping had nothing to do with complexities or principle, and everything to do with political expediency. This is not a case of one or two isolated switches; it’s a deliberate pattern of manipulation designed to deceive the American electorate. What we find behind the pattern, and the mask, is a candidate who lacks character, principles, and integrity. George W. Bush cannot be trusted to govern.