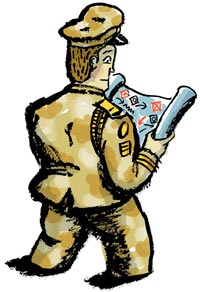 When Secretary of Defense Donald Rumsfeld told reporters last December that he expected U.S. troops to remain in Iraq for another four years, he was merely confirming what any visitor to the country could have surmised. The omnipresence of the giant defense contractor KBR (formerly Kellogg, Brown & Root), the shipments of concrete and other construction materials, and the transformation of decrepit Iraqi military bases into fortified American enclaves—complete with Pizza Huts and DVD stores—are just the most obvious signs that the United States has been digging in for the long haul. It’s a far cry from administration assurances after the invasion that the troops could start withdrawing from Iraq as early as the fall of 2003. And it is hardly consistent with a prediction by Richard Perle, the former chairman of the Defense Policy Board, that the troops would be out of Iraq within months, or with Iraqi National Congress leader Ahmed Chalabi’s guess that the U.S. occupation would last two years. Take, for example, Camp Victory North, a sprawling base near Baghdad International Airport, which the U.S. military seized just before the ouster of Saddam Hussein in April 2003. Over the past year, KBR contractors have built a small American city where about 14,000 troops are living, many hunkered down inside sturdy, wooden, air-conditioned bungalows called SEA (for Southeast Asia) huts, replicas of those used by troops in Vietnam. There’s a Burger King, a gym, the country’s biggest PX—and, of course, a separate compound for KBR workers, who handle both construction and logistical support. Although Camp Victory North remains a work in progress today, when complete, the complex will be twice the size of Camp Bondsteel in Kosovo—currently one of the largest overseas posts built since the Vietnam War.

Such a heavy footprint seems counterproductive, given the growing antipathy felt by most Iraqis toward the U.S. military occupation. Yet Camp Victory North appears to be a harbinger of America’s future in Iraq. Over the past year, the Pentagon has reportedly been building up to 14 “enduring” bases across the country—long-term encampments that could house as many as 100,000 troops indefinitely. John Pike, a military analyst who runs the research group GlobalSecurity.org, has identified a dozen of these bases, including three large facilities in and around Baghdad: the Green Zone, Camp Victory North, and Camp al-Rasheed, the site of Iraq’s former military airport. Also listed are Camp Cook, just north of Baghdad, a former Republican Guard “military city” that has been converted into a giant U.S. camp; Balad Airbase, north of Baghdad; Camp Anaconda, a 15-square-mile facility near Balad that housed 17,000 soldiers as of May 2004 and was being expanded for an additional 3,000; and Camp Marez, next to Mosul Airport, where, in December, a suicide bomber blew himself up in the base’s dining tent, killing 13 U.S. troops and four KBR contractors eating lunch alongside the soldiers.

At these bases, KBR, a Halliburton subsidiary that works in cooperation with the Army Corps of Engineers, has been extending runways, improving security perimeters, and installing a variety of structures ranging from rigid-wall huts to aircraft hangars. Although the Pentagon considers most of the construction to be “temporary”—designed to last up to three years—similar facilities have remained in place for much longer at other “enduring” American bases, including Kosovo’s Camp Bondsteel, which opened in 1999, and Eagle Base in Tuzla, Bosnia, in place since the mid-1990s.

How long is “enduring”? The administration insists that troops will remain in Iraq as long as it takes to install a functioning, democratic government, quell the insurgency, and build an efficient Iraqi fighting force. Given the elusiveness of those goals, many military experts believe that Rumsfeld’s hope that the troops might be out by 2008 is wildly optimistic. Retired Marine Corps General Anthony Zinni, the top U.S. commander in the Middle East from 1997 to 2000, recently predicted that American involvement in Iraq would last at least 10 more years. Retired Army Lt. General Jay Garner, the former interim administrator of reconstruction efforts in Iraq, told reporters in February 2004 that a U.S. military presence in Iraq should last “the next few decades.” Even that, some analysts warn, could be an underestimate. “Half a century ago if anyone tried to convince you that we’d still have troops in Korea and Japan, you’d think they were crazy,” says Pike, the military analyst. Suspicions also run deep both inside Pentagon circles and among analysts that the Department of Defense is pouring billions of dollars into the facilities in pursuit of a different agenda entirely: to turn Iraq into a permanent base of operations in the Middle East.

If true, this scheme is fraught with danger. The presence of U.S. troops is a powerful recruitment tool for the Iraqi insurgency—as well as a source of bitter anti-American feeling throughout the Middle East. Politically, the occupation is becoming increasingly untenable: Practically every significant Iraqi political figure—from Shiite spiritual leader Grand Ayatollah Ali al-Sistani to Iraqi president Ghazi al-Yawar, an influential Sunni Muslim—opposes the occupation and wants the troops out, and any leader who hopes to maintain credibility will have to make that a priority. “The presence of bases there is going to be a source of instability and anger for the Iraqi people, whether they are currently for the insurgency or not,” says Jessica Matthews, the head of the Carnegie Endowment for International Peace in Washington, D.C. “It will convince people across the Arab world that we went there to install an American regime in the Middle East.”

The other great danger of “enduring” bases, say critics, is that they tend to operate according to a well-tested axiom: The deeper you dig in, the harder it is to dig out. That’s hardly reassuring to the 11,400 U.S. soldiers who’ve had their enlistments extended through the stop-loss clause in their contracts, and to others who’ve been forced to serve multiple tours in the combat zone.

One indication of an open-ended U.S. occupation is the amount of money that has already been spent on bases in Iraq. KBR’s first big building contract there, in June 2003, was a $200 million project to build and maintain “temporary housing units” for U.S. troops. Since then, according to military documents, it has received another $8.5 billion for work associated with Operation Iraqi Freedom. By far the largest sum—at least $4.5 billion—has gone to construction and maintenance of U.S. bases. By comparison, from 1999 to this spring, the U.S. government paid $1.9 billion to KBR for similar work in the Balkans.

Does the Department of Defense have a bigger agenda in Iraq? Brig. General Robert Pollman, chief engineer of base construction in Iraq, caused a stir—and forced his superiors to engage in damage control—when he told the Chicago Tribune last spring that the bases could be a “swap” for bases in Saudi Arabia. The United States has been closing bases and drawing down its forces in the kingdom in response to the growing unpopularity of the American presence there and repeated terror attacks. In mid-2003, roughly 4,500 U.S. troops reportedly redeployed from Saudi Arabia to Qatar, leaving only about 500 in the kingdom.

Karen Kwiatkowski, a retired Air Force lieutenant colonel who served in the office of the Secretary of Defense until spring 2003, and has since become an outspoken critic of the war, says that the neoconservative architects of the Iraq invasion definitely foresaw a permanent, large-scale presence. Kwiatkowski says that Pentagon planners view the bases as vital both for protecting Israel and as launchpads for operations in Syria and Iran. The Pentagon, she says, went into the war assuming that once Saddam was toppled a so-called Status of Forces Agreement, like those the U.S. government signed with Japan and South Korea, could be quickly reached with Iraq. The growth of the insurgency and the vocal opposition to a prolonged U.S. occupation among Iraqi leaders haven’t changed the plan, Kwiatkowski insists: “We’re pouring concrete. We’re building little fiefdoms with security, moats, and walls…. Eighty percent of Iraqis will grouse, but they have no political power,” she says. “We’ll stay whether they want us to or not.”

Other American officials heartily dispute that assertion. One U.S. official who served alongside L. Paul Bremer in the Coalition Provisional Authority insists that base construction has been an ad hoc effort, reflecting the changing facts on the ground, not long-term strategy. “At no time did I ever overhear any meaningful discussion about ‘permanent bases,'” he says. “I remember asking Bremer about it from time to time, and he would say, ‘That’s ludicrous.’ Maybe there are some military guys brainstorming. But it just isn’t on the agenda.” The official concedes that permanent basing in Iraq “makes sense” from a strictly strategic perspective, given the steady reduction of U.S. forces in Saudi Arabia and the potential volatility of U.S. relations with other Gulf allies, like Qatar, Kuwait, Oman, and Bahrain, which currently have, all together, an estimated 30,000 U.S. troops stationed within their borders. But he agrees the consequences of such a move would be disastrous: Permanent bases “would be under siege, a temptation for terrorists, a symbol of U.S. occupation. It would totally undermine our political strategy in Iraq.” Adds Senator Jack Reed (D-R.I.), who serves on the Senate Armed Services Committee, “The next Iraqi leadership has to show they are truly sovereign and independent. And that’s hard to do if they lease significant parts of Iraq to the United States. We’ve already seen the ability of these insurgents to target our facilities and attack them. I’d be very reluctant to say this is a good place to base our troops.”

That’s not to say that the Pentagon isn’t keen to maintain at least some American presence on the ground. According to one intelligence source in Baghdad, maintaining a quick reaction force in Iraq would be essential to prevent, for example, a coup against a friendly Iraqi government. And the Pentagon sees Iraq as possibly playing a role in its global realignment of U.S. forces—a shift away from the static, Cold War basing arrangements in Europe to smaller, more flexible deployments in volatile regions like the Middle East. One model they point to is Camp Lemonier, which was built in the Horn of Africa country Djibouti in 2002 and houses about 1,300 troops as well as facilities for fighter planes.

A high-ranking military officer in the Middle East says that the Pentagon envisions a small number of bases in Iraq that “in no way approximates what we have there now.” He insists that “we are not planning to occupy the country. We’re talking about a small, unobtrusive presence—it could simply be facilities that give you the capability to come in and out.” That version of “Occupation Lite” may eventually come to pass. For the foreseeable future, however, it is difficult to imagine anything other than an enduring status quo: a heavy troop presence, big bases spread across the country, and a steadily rising body count.