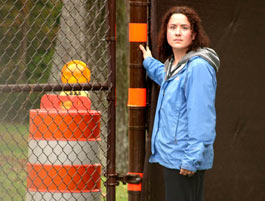 Last week, Ron Durham and Liz Deligio went to prison, joining the ranks of the more than 170 activists who, since 1990, have served time for protesting at the Western Hemisphere Institute for Strategic Cooperation, formerly known as the School of the Americas, in Ft. Benning, Ga.

Neither is what you’d call a threat to society. Durham, who is 24, volunteers at a Catholic Worker house in Chicago providing shelter for homeless single adults, and spent last year working with inner-city, at-risk teens at Mercy Home for Boys & Girls. Deligio, who is 28, is the chaplain for Misericordia, a home for developmentally disabled adults on Chicago’s north side, and is working on a Master’s degree from Catholic Theological Union.

And yet, having been found guilty by the U.S. district court in Columbus, Ga. of trespassing on government property, on March 15 they began serving 3-month jail terms. (Across the country, nine other activists arrested at the base the same day are now in jail.)

For 15 years now, activists have gathered in Ft. Benning each November to protest WHISC/SOA, which trains military officers from Latin American countries. The school opened in 1946, and its graduates have been linked to the intimidation and murder of political opposition, the targeting of civilians by death squads, and other reported crimes against humanity. (Manuel Noriega studied at the school, as did several high-ranking members of Augusto Pinochet’s government in Chile, among many, many others.)

SOA gained much of its public notoriety in 1989, after six Jesuit
priests were killed in El Salvador by SOA graduates. The next year, a Catholic priest, Rev. Roy Bourgeois, founded SOA Watch – an independent group working to close the school – as well as the annual protest held — in November, to mark the anniversary of the priests’ murders — to advance that goal. In 1996, declassified SOA training manuals, obtained by the Baltimore Sun via a Freedom of Information request, showed quite explicitly that the school’s curriculum featured torture techniques.

“As someone who’s been interested in civil disobedience for a while, SOA was the sort of issue I really identified with,” Durham said days before beginning his three-month term in Oxford, Wis. “It struck me as a microcosm of what’s wrong with U.S. foreign policy, the propping up of dictatorships and, obviously, the atrocities. And forget about democracy; democracy’s out the window immediately when we support these regimes.” 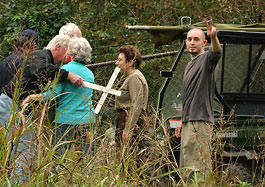 From the first 1990 vigil of about 12 people, the protest has grown exponentially, drawing an estimated 16,000 people in 2004. And at every protest, a handful of participants cross onto the base, risking sentences of up to six months.

Deligio, who is serving her sentence in Pekin, Ill., attended her first WHISC/SOA protest in 2001, having heard about the SOA while at college. “I’m coming from a Christian
perspective,” she says. “I really believe that we’re called to live in community with one another. If I live in a place of privilege where I can protest without being killed, murdered, tortured or have my family disappeared, then I feel you have to be a voice for those who can’t speak out for themselves.”

While grassroots activism is the highest-profile effort to close the school, some in Congress are also calling for action. Rep. James McGovern (D-Mass.) is introducing a bill in the House of
Representatives that, if passed, would call for a moratorium on use of the school while the government assesses the need for such an institution. “With this current president, of course, it would really be surprising if anything happened during his tenure,” Deligio says. “But I think we have reason to be hopeful, because Congress has more unrest in it than a sense of unity at this point.”

In December 2000, the Pentagon briefly closed the School of the
Americas, but it reopened one month later under the new name. The military maintains that WHISC is a different institution, but SOA Watch sees the change as largely cosmetic. “What changed with the name change,” says Christy Pardew of SOA Watch, “was just that they rolled out a massive p.r. campaign trying to convince people it was something else.”

To counter that impression, activists like Deligio and Durham remain willing to put their lives on hold. “I think it’s absolutely
necessary,” Durham says. “If you look back at the history of
progressive social movements in this country, there hasn’t been a movement that’s gained without this kind of non-violent tactics to expose the injustice, whether it was the abolition of slavery, the women’s suffrage movement, the civil-rights movement or a lot of the economic reforms that people take for granted. So I think it’s absolutely necessary, and that’s where I focus my energy.”

Since being co-defendants, Deligio and Durham have become friends, and they’ve teamed up for a number of lectures and events in Chicago, most recently an appearance at Montrose Harbor on the morning of the day they reported to jail.

Both Durham and Deligio will be released in mid-June. “The next three months are going to be challenging for me,” Deligio says. “But I’m looking forward to going back to the protest next November, to be a support for people who will be crossing the line. We received a lot of support from people who’ve done it previously, and I’ll be able to give that back.”