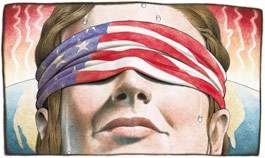 WHEN SOUTHERN CALIFORNIA was inundated by a foot of rain, several feet of snow, and lethal mudslides earlier this year, the news reports made no mention of climate change—even though virtually all climate scientists agree that the first consequence of a warmer atmosphere is a marked increase in extreme weather events. When four hurricanes of extraordinary strength tore through Florida last fall, there was little media attention paid to the fact that hurricanes are made more intense by warming ocean surface waters. And when one storm dumped five feet of water on southern Haiti in 48 hours last spring, no coverage mentioned that an early manifestation of a warming atmosphere is a significant rise in severe downpours.

Though global climate change is breaking out all around us, the U.S. news media has remained silent. Not because climate change is a bad story—to the contrary: Conflict is the lifeblood of journalism, and the climate issue is riven with conflict. Global warming policy pits the United States against most of the countries of the world. It’s a source of tension between the Bush administration and 29 states, nearly 100 cities, and scores of activist groups working to reduce emissions. And it has generated significant and acrimonious splits within the oil, auto, and insurance industries. These stories are begging to be written.

And they are being written—everywhere else in the world. One academic thesis completed in 2000 compared climate coverage in major U.S. and British newspapers and found that the issue received about three times as much play in the United Kingdom. Britain’s Guardian, to pick an obviously liberal example, accorded three times more coverage to the climate story than the Washington Post, more than twice that of the New York Times, and nearly five times that of the Los Angeles Times. In this country, the only consistent reporting on this issue comes from the New York Times’ Andrew Revkin, whose excellent stories are generally consigned to the paper’s Science Times section, and the Weather Channel—which at the beginning of 2004 started including references to climate change in its projections, and even hired an on-air climate expert.

Why the lack of major media attention to one of the biggest stories of this century? The reasons have to do with the culture of newsrooms, the misguided application of journalistic balance, the very human tendency to deny the magnitude of so overwhelming a threat, and, last though not least, a decade-long campaign of deception, disinformation, and, at times, intimidation by the fossil fuel lobby to keep this issue off the public radar screen.

The carbon lobby’s tactics can sometimes be heavy-handed; one television editor told me that his network had been threatened with a withdrawal of oil and automotive advertising after it ran a report suggesting a connection between a massive flood and climate change. But the most effective campaigns have been more subtly coercive. In the early 1990s, when climate scientists began to suspect that our burning of coal and oil was changing the earth’s climate, Western Fuels, then a $400 million coal cooperative, declared in its annual report that it was enlisting several scientists who were skeptical about climate change—Patrick Michaels, Robert Balling, and S. Fred Singer—as spokesmen. The coal industry paid these and a handful of other skeptics some $1 million over a three-year period and sent them around the country to speak to the press and the public. According to internal strategy papers I obtained at the time, the purpose of the campaign was “to reposition global warming as theory (not fact),” with an emphasis on targeting “older, less educated males,” and “younger, low-income women” in districts that received their electricity from coal, and who preferably had a representative on the House Energy and Commerce Committee.

The Western Fuels campaign was extraordinarily successful. In a Newsweek poll conducted in 1991, before the spin began, 35 percent of respondents said they “worry a great deal” about global warming. By 1997 that figure had dropped by one-third, to 22 percent.

Then as now, a prime tactic of the fossil fuel lobby centered on a clever manipulation of the ethic of journalistic balance. Any time reporters wrote stories about global warming, industry-funded naysayers demanded equal time in the name of balance. As a result, the press accorded the same weight to the industry-funded skeptics as it did to mainstream scientists, creating an enduring confusion in the public mind. To this day, many people are unsure whether global warming is real.

Journalistic balance comes into play when a story involves opinion: Should gay marriage be legal? Should we invade Iraq? Should we promote bilingual education or English immersion? For such stories an ethical journalist is obligated to give each competing view its most articulate presentation and roughly equivalent space.

But when the subject is a matter of fact, the concept of balance is irrelevant. What we know about the climate comes from the largest and most rigorously peer-reviewed scientific collaboration in history—the findings of more than 2,000 scientists from 100 countries reporting to the United Nations as the Intergovernmental Panel on Climate Change. The IPCC’s conclusions, that the burning of fossil fuels is indeed causing significant shifts in the earth’s climate, have been corroborated by the American Academy for the Advancement of Science, the American Geophysical Union, the American Meteorological Society, and the National Academy of Sciences. D. James Baker, former administrator of the National Oceanic and Atmospheric Administration, echoed many scientists when he said, “There is a better scientific consensus on this than on any other issue I know—except maybe Newton’s second law of dynamics.”

Granted, there are a few credentialed scientists who still claim climate change to be inconsequential. To give them their due, a reporter should learn where the weight of scientific opinion falls—and reflect that balance in his or her reporting. That would give mainstream scientists 95 percent of the story, with the skeptics getting a paragraph or two at the end.

But because most reporters don’t have the time, curiosity, or professionalism to check out the science, they write equivocal stories with counterposing quotes that play directly into the hands of the oil and coal industries by keeping the public confused.

Another major obstacle is the dominant culture of newsrooms. The fastest-rising journalists tend to make their bones covering politics, and so the lion’s share of press coverage of climate change has focused on the political machinations surrounding global warming rather than its consequences. In 1997, when the Senate overwhelmingly passed a resolution against ratifying the Kyoto Protocol, the vote was covered as a political setback for the Clinton administration at the hands of congressional Republicans. (Predictably, the press paid little attention to a $13 million industry-funded advertising blitz in the run-up to that vote.) When President Bush pulled out of the Kyoto negotiating process in 2001, the coverage again focused not on the harm that would befall the planet as a result but on the resulting diplomatic tensions between the United States and the European Union.

Prior to 2001, Bush had declared he would not accept the findings of the IPCC—it was, after all, a U.N. body. “The jury’s still out,” he said, and called instead for a report from the National Academy of Sciences. That report, duly produced one month later, while professing uncertainty about exactly how much warming was attributable to one factor or another, affirmed that human activity was a major contributor. In covering Bush’s call for an American climate report, few reporters bothered to check whether the academy had already taken a position; had they done so, they would have found that as early as 1992, it had recommended strong measures to minimize climate impacts.

Finally, coverage of the climate crisis is one of many casualties of media conglomeration. With most news outlets now owned by major corporations and faceless investors, marketing strategy is replacing news judgment; celebrity coverage is on the rise, even as newspapers cut staff and fail to provide their remaining reporters the time they need to research complex stories.

Ultimately, however, the responsibility for the failure of the press lies neither with the carbon lobby nor with newsroom culture or even the commercialization of the news. It lies in the indifference or laziness of hundreds of editors and thousands of reporters who are betraying their professional obligation to their readers and viewers. Climate change constitutes an immense drama of very uncertain outcome. It is as important and compelling a story as any reporter could hope to work on. Perversely, for so great an opportunity, it is threatening to become the shame of the American press.