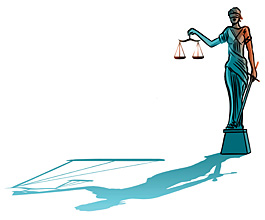 ONCE UPON A TIME, liberals regarded the U.S. Supreme Court as a beacon of freedom and decency. In the middle decades of the past century, it struck down the whites-only primary, decreed an end to segregation in public schools, established the right to privacy in birth control and abortion, ensured that every defendant would have an attorney — and required Richard Nixon to share his nasty White House tapes with the rest of the country. While politicians waffled and schemed, such men as Earl Warren, William Brennan, Thurgood Marshall, and Harry Blackmun made “justice” a reality as well as a title.

So it’s not surprising that as soon as Sandra Day O’Connor announced her retirement, a brigade of battle-ready activists leaped into the fray, determined to stop conservatives from conquering the one branch of government that is still expected to stand for civic virtue. “Our very national identity hangs in the balance,” warned People for the American Way.

But the frenzied focus on the Supreme Court ignores a civic reality that our ideological forebears knew all too well. Under the Constitution, the Court is the most undemocratic branch of government. It was expressly designed to slow down social changes that Congress or the state legislatures might enact. With her famous swing vote, Justice O’Connor was able to wield tremendous and unjustified power — which she used both to protect women’s control over their own bodies and to award the presidency to a governor from Texas who had lost the popular vote.

Throughout most of American history, reformers and radicals denounced the Court’s unelected, life-tenured potentates in their priestlike robes — regardless of which president appointed them — and with good reason: For much of the 19th and 20th centuries, the justices ruled consistently against social movements that struggled for a more humane America. They struck down a progressive income tax enacted by Congress, allowed lower courts to levy crippling penalties on labor organizers, and decreed nearly every major act of the early New Deal unconstitutional.

The Warren Court thankfully departed from such benighted traditions. But as welcome ruling followed welcome ruling through the 1960s and early ’70s, many progressives seemed to forget that only popular majorities can secure the rights of individuals from attack and erosion. Roe v. Wade is a case in point. That landmark 1973 ruling cut short the slow but steady passage of liberal abortion laws by state legislatures. As Ruth Bader Ginsburg wrote before she joined the Court, the ruling in Roe “halted a political process that was moving in a reform direction and thereby…deferred stable settlement of the issue.”

In the wake of Roe, the anti-abortion movement exploded, impelled by the same rage at “judge-made law” that was once the province of the left. Pro-choicers and their allies then rushed to defend the enemy of their enemy — the Court’s perilous liberal majority. Every four years, friends would insist that they were casting their votes for such uninspiring Democrats as Walter Mondale, Michael Dukakis, and Al Gore only “because of the Supreme Court.”

The propagandists of the right learned how to exploit this state of mind. Time and again, they have played the populist card, even as Republican presidents worked to pack the Court with their own breed of judges. As one conservative columnist put it recently, “Every time the people of the country speak through their legislatures on the hot-button issues of the day…the army of lawyers of the Left line up at the courthouse steps to put a stop to the will of the people.”

When the right’s hypocrisy can masquerade as common sense — and help Republicans get elected — this is not a conflict we can win. For a vibrant, self-confident left, the Court should be the first resort only for those people, such as lawyerless prisoners, who have little chance to sway public opinion on their own. But when it comes to the broader rights of citizens, the focus on blocking right-wing justices, pursued to the near-exclusion of other issues, can take up too much of the vigor and resources needed for the core undertaking of democratic politics: mobilizing ordinary Americans to support a vision of social justice, and fielding candidates able to carry it out. Progressives began that task with gusto in 2004 — despite an awkward, lackluster nominee — and came remarkably close to victory. We can fight against conservative bench-packing without turning the courthouse into our Alamo. Why dig in for a last-ditch defense when we have just begun to move?