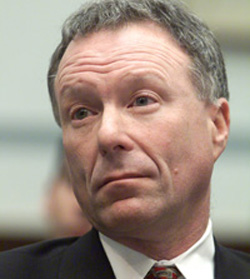 The Grand Jury supervised by U.S. Attorney Patrick Fitzgerald has returned an indictment charging Vice President Dick Cheney’s top aide and reputed “alter-ego” I. Lewis “Scooter” Libby with perjury, obstruction of justice, and false statements to the grand jury. But this indictment does not end the story; rather, a close reading suggests that these charges are most likely merely a chapter in a long and tragic story. Here, from a former federal prosecutor, are thoughts about four things we should expect, four things we shouldn’t, and one question we should all be asking.

We should not expect a final resolution any time soon. Complex cases usually take years to proceed through the courts. In addition, the indictment released today describes a chronology of close to two years and a complicated set of facts. Obviously, Fitzgerald is taking a “big picture” approach to this case. This mirrors his approach to previous cases. In December 2003, for example, Fitzgerald announced the indictment of former Illinois Governor George Ryan on corruption charges in Operation Safe Road, which began in 1998. In that year, the investigation of a fatal accident revealed that truckers were purchasing commercial licenses from state officials. Indictments were announced in stages, culminating in the indictment of Ryan, who was the 66th defendant in the case. In the Libby case, the allegations suggest he was merely one of many officials — including an unnamed Under Secretary of State and “Official A,” a Senior White House Official — who were involved in revealing classified information about Joseph Wilson’s wife Valerie Plame. No other individuals are named as defendants, and they should not be considered so at this point, but the complexity of the indictment suggests that the investigation may follow a pattern similar to that used by Fitzgerald in the Illinois corruption case.

We should not expect to hear much more from Fitzgerald. The Special Counsel has been widely admired, and sometimes criticized, for his “tight-lipped” approach and “leak-free” grand jury investigation. But that, folks, is how it’s supposed to be. Federal prosecutors are required to maintain grand jury secrecy. If they don’t do that, they not only jeopardize their investigations, they could lose their jobs and/or be charged with a crime. The public has come to expect leaks from grand jury investigations because Independent Counsel Kenneth Starr, who was not a federal prosecutor, ignored secrecy rules during the investigation of President Clinton (and got away with it). Even after indictment, Department of Justice (DOJ) press guidelines permit release of only limited facts about the defendant, the charges against him, and court documents or testimony that may become public during the prosecution. Don’t hold your breath waiting for Fitzgerald to explain evidence not alleged in the indictment; nor will he appear on talk shows to debate defense representatives.

We should not expect a smoking gun. Even when there actually is a gun, there’s hardly ever a smoking gun. In the case against Libby, as in most white-collar crime cases, the evidence is likely to consist mainly of documents, thousands of them. And considering that the weapon employed in this crime appears to be a telephone, the closest thing to a smoking gun may well be telephone records.

We should not expect the President to take steps to “get to the bottom of this.” He professed that desire in October 2003, but belied it in the next breath, saying he “had no idea who the leaker was and didn’t know if we’d ever find out. “There’s a lot of senior officials [out there],” he commented. “You tell me,” he asked a group of reporters, “how many sources have you had that’s leaked information, that you’ve exposed, or had been exposed? Probably none.” Of course, assuming Bush didn’t already know who the leakers were, all he had to do was make darned sure his aides told him. After all, organizations routinely conduct internal probes in parallel with criminal investigations. Indeed, the U.S. Sentencing Guidelines consider such inquiries to strongly indicate corporate acceptance of responsibility. But accepting responsibility for the CIA leak would have put quite a damper on the Bush reelection campaign. So, with his usual Janus-like approach to every threat, the President managed to declare himself above such petty politics while allowing surrogates to spread disinformation. In other words, the administration has attempted to derail the prosecution in precisely the same way it tried to derail ex-ambassador Joseph Wilson’s credibility in the first place.

We should expect red herrings from the defense (even if not smoking guns from the prosecution). Fox hunters once tossed smoked red herrings out to test whether their dogs could stay on the right trail. Now, of course, the term means a distraction from the real issue; and if the Republican Talking Points rolled out thus far are any indication, we are going to be tripping over red herrings galore in the upcoming months.

We should expect more attacks on Joseph Wilson, even though they represent a very large red herring (more the size of a mackerel). These will be meant only for the court of public opinion. Since the White House has already admitted, repeatedly, that it had insufficient evidence to mention that Saddam Hussein was seeking Niger “yellowcake” uranium in the President’s State of the Union address in 2003, claims that Wilson went to Niger on a boondoggle or that he is merely a partisan critic (both of which appear to be untrue) have never been the least bit relevant. If you don’t dispute the essence of the testimony of a witness, then undermining his credibility is pointless in a court of law.

We should expect another red herring, one that should have been thrown back in the river long ago: that perjury, obstruction of justice, and false statements charges are not “substantive,” and so somehow less serious. “Substantive” is a legal term, referring to a crime that can be proved without reference to the elements of another crime. For example, bank robbery is a “substantive crime” and conspiracy to commit bank robbery is not. (But they’re both crimes.) Perjury, obstruction of justice, and false statements may arise out of the investigation of other crimes, but they stand on their own. So they too are “substantive” crimes. More to the point, as Patrick Fitzgerald eloquently explained in his press conference, lying in an investigation is extraordinarily serious, because it undermines the integrity of the process.

We should expect attempts by pundits to derive “meaning” from the absence of charges under the Intelligence Identities Protection Act or the Espionage Act. Reasons for the absence of such charges can range from insufficient evidence to concerns about the Classified Information Procedures Act, which governs the use of classified information in a criminal case. No one other than Fitzgerald, his staff, and the grand jury knows why certain charges were not brought and they will never be able to explain their decisions.

We should expect a campaign to demonize Fitzgerald through claims that he is overzealous and has exceeded his authority. Such attacks are legally irrelevant, but more important, they’re wrong. Fitzgerald’s original mandate, contained in a letter from Deputy Attorney General James Comey, was to investigate all crimes arising from the outing of Valerie Plame. Out of an apparent abundance of caution, Fitzgerald requested clarification of the term “all” and was advised, again by Comey, that it included both underlying crimes and crimes that stemmed from the investigation of the underlying crimes. At no time did Fitzgerald seek, or receive, an expansion of his authority: it was there all along, as it would be in any investigation of federal crimes.

We should also expect pundits to argue that this prosecution is political. That is the most despicable of red herrings considering that Fitzgerald has been a career prosecutor forbidden by the Hatch Act to participate in politics for twenty years, is registered without political affiliation, and was appointed by a Republican. Also, the resulting indictments were returned by grand jurors who heard evidence for two years, after which a majority, at least 12 out of 23, decided that there was probable cause to believe — in other words, it was “more likely than not” — that the defendant had committed all the elements of the crimes charged. In other words, in investigating and returning an indictment against the Vice President’s Chief of Staff, Patrick Fitzgerald and the grand jury have followed one of the most basic principles of criminal jurisprudence: that the law is no respecter of persons, that all persons stand equal before it. It would have been the most flagrant violation of the rule of law if the prosecutor and grand jury had walked away from Lewis Libby’s deliberate deceptions simply because he was an important government official.

But should we expect, given the Republicans’ attempts to belittle and politicize the case thus far, that President Bush will pardon his senior administration official if Libby is convicted on these serious charges? The 1992 Christmas Eve pardons of Iran/contra defendants by former President George Bush Sr. provide cause for concern. Let us hope that the current President Bush will not undermine the rule of law in this way.

Elizabeth de la Vega has recently retired after serving more than 20 years as a federal prosecutor in Minneapolis and San Jose. During her tenure, she was a member of the Organized Crime Strike Force and Chief of the San Jose Branch of the U.S. Attorney’s Office for the Northern District of California.

This piece first appeared, with an introduction by Tom Engelhardt, at Tomdispatch.com.