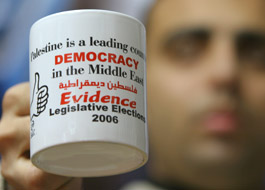 Almost ten years ago to the day, I stood in a polling station in the Palestinian village of Abu Dis, the soon to be capital, everyone assumed, of a newly independent Palestine. A tear clouded my eye as I watched two young Palestinian policemen carry a frail old man to a voting booth for what was (and perhaps remains) the freest elections in the history of the Middle East. It seemed a fitting symbol of the new Palestine.

Yet to anyone unafraid to see the bigger picture, the optimistic scene before me did not fit the reality unfolding on the ground. The signs of trouble were everywhere: the constantly expanding ring of Jewish settlements and checkpoints around Abu Dis (and all of Jerusalem), continued Palestinian terrorism, Israeli land expropriations and economic closures of the Territories, the widespread corruption of the Palestinian Authority, and the still-stained pavement under the Tel Aviv Municipality where Rabin had been gunned down only two months before–all these pointed to a situation that would deteriorate, not improve, after the elections.

And deteriorate it did, despite the best efforts of Oslo’s Israeli and Palestinian architects. The reality was that Oslo was doomed from the start. The divergence of interests between even the most liberal Israelis and the majority of Palestinians was just too great. The formers’ interests lay in what former Prime Minister Ehud Barak described as a a “divorce,” a separation that cemented Israel’s transition to a globalized economy by preserving its dominance in the territories while expanding its economic and cultural presence across the Middle East.

That meant no large scale withdrawal from major settlement blocs or, as important, from the aquifers on top of which many were purposely built. It also necessitated the replacement of hundreds of thousands of Palestinian workers with more docile “foreign” workers, establishing Maquiladora-type “industrial estates” in the border regions between the two communities, and prohibiting, by treaty, the development of any sector of the Palestinian economy that could challenge existing Israeli industries.

To sustain such an untenable negotiating paradigm, the Palestinian Authority had to be converted from a transitional government working towards a quick assumption of sovereignty into Israel’s political and economic enforcer in the territories. This necessitated a level of corruption, repression, and brutality that would approach what Palestinians suffered under direct Israeli rule.

But as the weaker party by far, the PA had little choice but to go along with the illusion of a peace process whose main accomplishment would be to divide Palestine into ever smaller pieces of territory. Such a situation was ultimately untenable, as the world learned with Arafat’s infamous “No” at the Camp David summit of July 2000, and Sharon’s walk along the Temple Mount two months later. The first revealed as fantasy the belief that the “father” of Palestinian nationalism would publicly sign away the rights of return and to Jerusalem for a token of sovereignty. The second precipitated an intifada that revealed a Palestinian society too politically desperate and strategically confused to take control of its destiny from a failed leadership.

For its part, Israel, in its response, demonstrated that it was clueless about how little Oslo had benefited most Palestinians. What’s more, most Israelis would sanction the reimposition of direct military occupation and the expansion of its settlement infrastructure until Palestinians accepted precisely the state of affairs that forced even a supine Arafat to say no.

Five and a half years later, and the results of a new set of elections are now being tallied. Only this time no one’s wearing rose-colored glasses. Yet with the passing of the 1948 generation of leaders such as Arafat and Sharon, the sense of historical mission and destiny is rapidly disappearing from both peoples.

In this sense, a strong showing from Hamas, even its assumption of power would likely be the best thing that could happen to what remains of the peace process. Contrary to its public persona in Israel and the US, Hamas has long moderated its strategic thinking, even if its tactics have remained unimaginatively violent. Indeed, throughout the Oslo period its leaders spoke publicly about accepting a long term “truce” that signaled its acceptance of a two-state solution.

Even in the midst of the al-Aqsa intifada, as a senior Hamas intellectual would explain to me, talk of returning to a “one state” solution was nonsense. “Are you crazy?” he asked. Echoing Barak–purposely, he all but admitted–he continued, “We want a divorce from the Jews, not to live more closely together. Just leave us alone, please.”

Just as Sharon was seen by Israelis as the only leader tough enough to get maximum concessions from the Palestinians, Hamas, because it is everything the Palestinian Authority is not — uncorrupted, uncowed, well-disicplined, and strategically far-sighted — is increasingly viewed by Palestinians as the only political force capable of forcing Israel to move closer to the minimal Palestinian demands of contiguous territory, some form of sovereignty over Palestinian neighborhoods of East Jerusalem, and the acceptance of at least a token number of refugees within the borders of 1967. With such adversaries, a final settlement is in fact more likely than during the Oslo years. The problem is that it may be too late; Israel has successfully crushed the intifada and Israelis are willing to live with the current level of violence if it allows the government to unilaterally “end” the conflict on Israel’s terms. So why negotiate?

Indeed, Hamas’s willingness to change its election charter and join the political process could well have come five years too late. Sitting in Gaza three years ago a senior activist explained to me, “We know the violence doesn’t work, but we don’t know how to stop it.” The fate of Palestine will depend in large measure on how well Hamas negotiates an even steeper learning curve in the post-Oslo era.