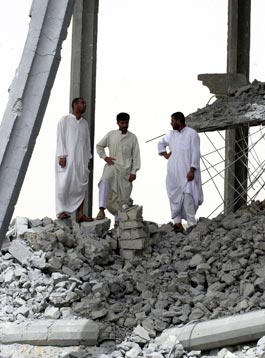 One of the true scandals of media coverage of the war in Iraq has been the simple fact that you — relatively small numbers of you anyway — had to visit Tomdispatch.com, or Juan Cole’s invaluable Informed Comment blog, or Antiwar.com, or other Internet sites to find out anything about the fierce (if limited) ongoing air war in that country. The American media’s record on coverage of the air campaign against the Iraqi insurgency since Baghdad was taken in early April 2003 has been dismal in the extreme. Our military has regularly loosed its planes in “targeted” attacks on guerrillas in Iraq’s heavily populated urban areas (where much of the fighting has taken place), sometimes, as in largely Shiite Najaf and largely Sunni Falluja in 2004, destroying whole sections of major cities, in part from the air. Despite this, American reporters in Iraq have essentially refused to look up, or even to acknowledge the planes, predator drones, and low-flying helicopters passing daily overhead.

In these years, only one journalist, Bradley Graham of the Washington Post, seems to have visited an American air base in Iraq and written a piece about it — an anodyne piece from an otherwise good reporter. As far as I can tell, no American reporters have been assigned to, or written about, the part of the American air campaign that has been mounted from outside Iraq — from air bases in places like the Indian Ocean island of Diego Garcia, or from aircraft carriers; and hardly more has been written from the United States where our fleet of unmanned but deadly Predator drones are (remotely) controlled. Because the military has continued to release limited amounts of information on its air campaign, the odd line or even paragraph (clearly taken from military press releases or news conferences) about bombing or missile runs on Iraq’s urban areas made it into boilerplate wire-service news stories; otherwise the air campaign has simply been missing in action.

There was no excuse for this. To take just this site: If, in August 2004, you had read What Do We Call the Enemy?, you would have known that the air war, to my mind, was already the number-one missing story in Iraq coverage (followed closely, as is still true, by the issue of administration plans for maintaining permanent bases in Iraq). As I wrote then, “Air power has been at the heart of the American-style of war since World War II.” For war reporters with even the slightest historical memory, that alone should have made it an obvious topic of interest. Several months later, in December 2004, I devoted a dispatch to the subject, Icarus (Armed with Vipers) Over Iraq, writing:

“The complete absence of coverage [of the American air campaign]? is a little harder to explain. Along with the vast permanent military base facilities the U.S. has been building in Iraq to the tune of billions of dollars? the loosing of air power on Iraq’s cities is the great missing story of the postwar war. Is there no reporter out there willing to cover it? Is the repeated bombing, strafing, and missiling of heavily populated civilian urban centers and the partial or total destruction of cities such a humdrum event, after the last century of destruction and threatened destruction, that no one thinks it worth the bother to attend to? Is the Bush administration really to be given another remarkable free ride?”

This all seemed so obvious, even to someone thousands of miles from Iraq. Still, no reporter took the subject up. Soon after — in February 2005 — I asked Dahr Jamail, an independent journalist covering the war from Baghdad, to write a piece on the subject. His report, Living Under the Bombs, ended with this vision of air power in Iraq:

“Helicopters buzz the tops of buildings and hover over neighborhoods in the capital all the time, while fighter jets often scorch the skies. Below them, traumatized civilians await the next onslaught, never knowing when it may occur.”

In December, 2005, back in the U.S., he returned to the subject (“An Increasingly Aerial Occupation”), doing what any reporter in or out of Iraq should have been quite capable of doing — mining the news releases the military was regularly producing on its air campaign.

But it took another reporter in the U.S. to put American air power in Iraq on the media map. Comparisons of Vietnam and Iraq are constantly being disputed and discredited and yet, given the Bush administration’s actions, all sorts of strange parallels can’t help but continually pop to mind. Take Seymour Hersh, now a reporter for the New Yorker magazine, who has never set foot in war-torn Iraq, and compare him, for instance, to… Seymour Hersh, the young former Associated Press reporter writing for a little known news outlet called Dispatch News Service, who had never set foot in war-torn Vietnam. On November 13, 1969, Dispatch released a piece by Hersh, picked up by more than thirty newspapers nationwide, which began: “Lieutenant William L. Calley, Jr., twenty-six, is a mild-mannered, boyish-looking Vietnam combat veteran with the nickname ?Rusty.’ The Army says he deliberately murdered at least 109 Vietnamese civilians during a search-and-destroy mission in March, 1968, in a Viet Cong stronghold known as ?Pinkville’…” This is how the My Lai massacre first reached our world — not from one of the scads of reporters in Vietnam but from a loner in Washington. Unlike Bob Woodward, who transformed himself in the post-Watergate era into an imperial stenographer, Hersh has remained implacably on the job all these years. (His old book, The Price of Power: Kissinger in the Nixon White House, should be required reading for every political observer in this country who wants to put the growing NSA flap over spying on citizens, possibly reporters, and who knows whom else, in perspective.) Now, he has done a similar service from afar. By writing Up in the Air for the December 5 New Yorker on the Bush administration’s decision to intensify its air war as part of an Iraq “withdrawal” plan, he made American reporters in that country look up at the skies (and more power to him for that). In the wake of his report, though little has really changed, pieces on the air war are suddenly part of the mainstream news mix. Reporters are mining information released by the military, calling Iraqis in bombed-out urban areas — doing, in short, what reporters are supposed to do.

What makes this more of a scandal is the fact that the changeover from two-plus years of no air-war articles to a spate of them has come without the slightest acknowledgement anywhere that anything is being done differently. It’s seamlessly as if it had always been so. Nonetheless, the American press has a long way to go to report on the air war in the fashion it actually deserves, and someone far away — in this case sociologist and Tomdispatch regular Michael Schwartz — can still make sense of it in a way impossible to find off the Internet. Yet.

Tom Engelhardt writes and edits Tomdispatch.com, where this article first appeared as an introduction to “The American Rules of Engagement from the Air,” by Michael T.Schwartz.