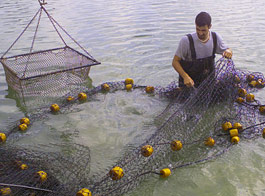 Q: What is aquaculture?

A: Aquaculture refers to the cultivation of water produce, and includes farms for fish, shellfish, algae, or other aquatic plants. The growers or farmers intervene in the rearing process by stocking the farms regularly, as well as feeding and protecting the farmed organisms from predators. Examples include raising catfish and tilapia in freshwater ponds, growing cultured pearls, and farming salmon in net pens in the bay. It has been used since at least 3500 B.C. in China, when farmers fed and raised carp that had been stranded in artificial lakes left behind when floodwaters receded.

Q: Where does farming take place, and what are some of the most heavily farmed species?

Q: How important is aquaculture to the world food chain?

A: Aquaculture has been one of the fastest growing components of global food production in recent decades, increasing by more than 10 percent a year. In part this is because fish and other farmed species need far less food than other terrestrial species to produce the same amount of protein. Aquaculture now accounts for roughly 30 percent of the world’s total supply of fish food—at a worldwide value of some $60 billion. In the United States, about 70 percent of all seafood is imported, and of that, about 40 percent is farmed.

Many aquaculture industries are based in developing countries and contribute greatly to both food security and wealth in those regions. In addition, raising domestic species can reduce pressure on stocks in the wild, especially those that are over-fished or exploited. If done right, aquaculture can act as a sustainable substitute for wild fisheries, which are rapidly becoming depleted. But the key phrase is “if done right.”

Q: Can aquaculture have a negative impact on the environment?

A: Yes, very much so. Organic wastes from fish cages in public waters can have a significant effect on the surrounding water quality. Waste from fish farms can include: fecal matter and uneaten food, along with chemicals used in farming such as pesticides, herbicides, and antibiotics. Because fish and other organisms are kept in close proximity, they are more likely to breed diseases. All of these can impact the surrounding environment. In addition, many “crops” are transported from one region to another for farming, which can introduce new organisms and diseases into the surrounding area.

A few examples: In New Brunswick, despite the fact that salmon farming sites occupy less than 0.01 percent of the coastal area in their region, scientists have found significant degradation of the water in the surrounding are

A: lowered oxygen levels, replacement of native seaweeds with invasive species, algal blooms, reduction of wild species, and a loss of nursery habitat for wild fish. In the United States, a pathogen that attacks the eastern oyster was likely introduced into the U.S. Atlantic and Gulf coasts through aquaculture.

There are also concerns that fish will escape from the fish farms and either breed with wild fish—affecting genetic diversity and decreasing their survivability—or else compete for food and spread diseases. Over the past decade, nearly one million non-native Atlantic salmon have escaped from fish farms and established themselves in streams of the Pacific Northwest.

Q: Are some fish farms dependent on wild fisheries for food?

A: Yes. Many farmed fish species are carnivorous, so other wild fish species must be harvested to maintain the farm. Carnivorous species of fish, such as salmon, trout, tuna, grouper, and cod, require a protein rich, high-energy diet. Herring are used to make salmon feed, so they have been heavily harvested in the wild, putting pressure on the many other wild species that depend on herring for food. So fish farms can end up leading to over-fishing of the very wild fisheries they are supposed to help protect.

Q: What do defenders say to these criticisms?

Q: Are any of the farm animals genetically modified?

A: No, not yet, but that could be the case in the future, especially with an expected increases in worldwide demand for food. Some segments of the agriculture industry and the government have suggested that increased yields could and should be achieved by genetically modifying aquaculture “crops”. At least one company in the United States has already applied for permission to market an engineered Atlantic salmon. Environmentalists worry that this engineered organism would become an invasive species if it escaped in to the wild.

Q: How effective are the policies and regulations that govern aquaculture?

A: Not very. The regulations affecting aquaculture are complex and fragmented—there is no comprehensive oversight of the industry. In the United States a number of state laws, federal statutes, executive orders, and international treaties apply to various environmental aspects of commercial aquaculture, but not all of them are adequate, and many provide fragmented coverage—focusing only on isolated aspects of the environmental impact of aquaculture.

For example, the Clean Water Act has not been applied to aquaculture operations, despite the fact that the nitrogen, phosphorus, and fecal waste coming from fish farms are extremely harmful to the surrounding area. The Army Corps of Engineers grants permits for aquaculture sites on a case-by-case basis under the Rivers and Harbors Act, but that act lacks clear environmental standards.

Q: What could be done differently?