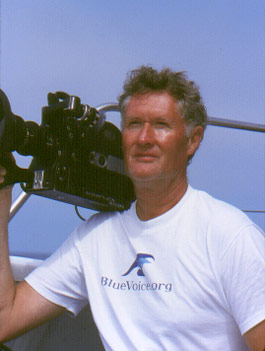 Filmmaker and conservationist Hardy Jones developed a fascination with dolphins in the 1970s through his interest in the study of consciousness; soon, he quit his work as a journalist and became the first documentarian to film them in the wild. He’s been making documentaries about oceans ever since, seeking to inform the public about the threats facing dolphins and other marine life, and to engage people in the cause of conservation. He founded an advocacy group, BlueVoice, with the actor Ted Danson, and sits on the board of another, Oceana. He recently spoke by phone with Mother Jones from his home in near San Francisco.

Mother Jones:How did you get into this work?

Hardy Jones: My original experience seeing the dolphins and swimming with them and making contact with them, I was just thrilled. At the same time I became aware of the horrible dolphin slaughters that took place in the tuna nets and in Japan and elsewhere. So there was a collision—of great joy with great horror. It became clear, by the mid-eighties, that I was not going to be able to spend my life in happy circumstances studying dolphins in the wild. By that time pollution issues had come to the fore, and in 1988, I think, there was this big die-off of dolphins off the East Coast of the United States, with hundreds washed ashore and thousands probably dead. Nobody could determine exactly why this took place, but they did know that they had extremely high levels of PCBs and other organic chlorines in them. It was such a horror to think of these animals having to deal with these levels of contamination so high that the dead ones had to be classified as toxic waste.

MJ: How has the situation for dolphins changed, if at all, since those early days?

HJ: Well, there’s been some progress. We did a film in 1991 or so with Michael Douglas as the host, where we had some footage of dolphins dying in the tuna nets. It generated an avalanche of telegrams to the head of Starkist, and they then said they would no longer buy tuna caught in connection with dolphins. The numbers killed in the tuna fishery has gone way down.

On the other hand, worldwide pollution has increased and continues to increase. We’re doing work right now on polar bears and killer whales up in the Norwegian Arctic. The killer whales have levels of persistent organic pollutants (POPs) that are as high as in whales in industrial areas. That shows how this stuff gets mixed by the ocean currents; it’s a worldwide phenomenon. We’re also doing a study on polar bears, which are exhibiting hermaphroditic sexual organs due to PCBs that imitate estrogen.

Generally the problems have become less easy to cope with. In the past, the idea was, we’re going to stop the bad guys with the spears, the harpoons. Now, we’ve got to deal with a worldwide phenomenon. The ocean is really a chemistry experiment right now. Now it’s a huge worldwide effort to make people aware of the effects of dumping stuff in the ocean.

MJ: Do you make a distinction between your filmmaking and your activism, or are both geared to the same ends?

HJ: The aim is to bring awareness with emotion—or with motivation, if you prefer; to inform people and mobilize them. My last film, “The Dolphin Defender,” was on Nature, on PBS, and it had a quarter-of-a-million-dollar budget. So it enabled us to go around the world to acquire footage and investigate stories, and I contribute that knowledge to Bluevoice. The organization I set up in 2000 with Ted Danson. I often do video work that goes out to organizations like Oceana. I just did a seven-minute film on mercury that’s going to go up on the Oceana website and be distributed on DVDs.

Soon we’ll be putting downloadable mini-documentaries on the bluevoice website, which people will be able to download and put on their video Ipods. They’ll be able to take them around and show them in small groups, in schools—take them to their markets and show them to the managers and say, Look at the story of these fish, look what you’re selling people. We’ve always tried to be at the cutting edge of technology. That’s what inspired bluevoice—that technology had become available that would provide whole new ways of communicating with people, bypassing standard media and the political process and going, through the Internet, more directly to people.

MJ: And part of the need to bypass standard media is that they don’t pay enough attention to these issues, right?

HJ: Yes. Every once in a while, standard media cover the fact that there’s this terrible slaughter of dolphins that takes place in Japan. Now, I was in the news business myself, and I know you can’t just keep on rolling out that story over and over again.

What we did, in 2001, is to go over to Japan, arriving just as they were about to kill a group of pilot whales. And so we said to them, Okay, here we are, and this is going up on the Internet, pretty much live; and they just stopped in their tracks! They were horrified, and we were able to hold off that slaughter for three days by putting this report out every few hours on the Internet saying we’re trying to prevent a kill, the animals are very stressed etc. By the end of it we had around 300,000 people tuning in to the web site, because of the serial nature of it—the story would build from one day to the next. These guys in Japan were flooded with emails and faxes. Then, on the fourth day, they went out a 5 o’clock in the morning, literally in a typhoon, and they killed the whales. But we got it on film.

So I think this concept of live webcasting from places where we can build an audience and that audience starts immediately to feed back to the culprits, if you will—that’s really my dream for going forward.

MJ: Any signs that, as the problems become more and more apparent, media are paying more attention to oceans issues?

HJ: Some organizations are having more success—Oceana, for example. It’s a big organization, newly founded but with plenty of resources behind it, and some pretty major players, including celebrities, involved in it. It’s had some successes already, in getting cruise ships—one of the lines—to stop dumping untreated waste in the ocean. The mercury campaign is just getting going right now.

I do think the ocean has finally worked its way to peoples’ consciousness. In part, it’s because some of the crises in the oceans are coming back to bite us, in the sense, that we have less fish to eat, that the cost of fish is so high compared to what it used to be, and the fish that survive are highly contaminated—finally all this has gotten into public consciousness.

MJ: How optimistic are you that some of the more alarming trends can be reversed?

HJ: Well, some progress has been achieved, and more will be achieved. But will it be enough to really stop the momentum of what’s already in process? I’m not so optimistic about that. Everything that goes wrong makes something else go wrong. Take global warming, for instance: I was up in the Arctic recently with some Inuit people. The Arctic is a sink for pollutants—you wouldn’t think so, but with the currents and the winds, a lot pollutants wind up there and get frozen into the ice and stored. But now the ice is melting, and a lot of pollution that was bound up in the ice is now leaking out into the ocean system and into the food chain. So, the synergies are working against us. But the only alternative is to work our butts off; that’s the only game in town as far as I’m concerned.