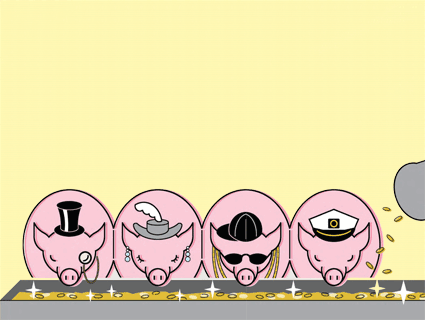 THERE’VE BEEN FEW new additions to the Forbes 400. The median household income has also stagnated—at around $44,000.

ONLY ESTATES worth more than $1.5 million are taxed. That’s less than 1% of all estates. Still, repealing the estate tax will cost the government at least $55 billion a year.

ONLY 3% OF STUDENTS at the top 146 colleges come from families in the bottom income quartile; only 10% come from the bottom half.

THIS YEAR, Donald Trump will earn $1.5 million an hour to speak at Learning Annex seminars.

ADJUSTED FOR INFLATION, the federal minimum wage has fallen 42% since its peak in 1968.

ELLISON RECENTLY posed in Vanity Fair with his $300 million, 454-foot yacht, which he noted is “really only the size of a very large house.”

ONLY THE WEALTHIEST 20% of Americans spend more on entertainment than on health care.

PUBLIC COMPANIES spend 10% of their earnings compensating their top 5 executives.

1,730 BOARD MEMBERS of the nation’s 1,000 leading companies sit on the boards of 4 or more other corporations—including half of Coca-Cola’s 14-person board.

TIGER MADE $87 million in 2005, all but $12 million from endorsements and appearance fees.

THE 5TH LEADING philanthropist last year was Boone Pickens, in part due to his $165 million gift to Oklahoma State University’s golf program.

WITHIN AN HOUR, OSU invested it in a hedge fund Pickens controls. Thanks to a Katrina relief provision, his “gift” was also 100% deductible.

THIS PERK is 66% more costly to companies whose CEO belongs to out-of-state golf clubs.

THE U.S. GOVERNMENT spends $500,000 on 8 security screeners who speed execs from a Wall Street helipad to American’s JFK terminal.

UNITED HAS CUT the pensions and salaries of most employees but promised 400 top executives 8% of the shares it expects to issue upon emerging from bankruptcy.

IN 2005, DELPHI HIRED Miller for $4.5 million. After Ross said he might buy Delphi if its labor costs fell, Miller demanded wage cuts of up to 63% and dumped the pension obligation.

10 FORMER ENRON directors agreed to pay shareholders a $13 million settlement—which is 10% of what they made by dumping stock while lying about the company’s health.

POOR AMERICANS spend 1/4 of their income on residential energy costs.

CEO PAY AMONG military contractors has tripled since 2001. For David Brooks, the CEO of bulletproof vest maker DHB, it’s risen 13,233%.

FOR PERFORMING IN the Live 8 concerts to “make poverty history,” musicians each got gift bags worth up to $12,000.

OSCAR PERFORMERS and presenters collectively owe the IRS $1,250,000 on the gift bags they got at the 2006 Academy Awards ceremony.

A DOG FOOD COMPANY provided “pawdicures” and other spa treatments to pets of celebrities attending the 2006 Sundance Film Festival.

ONE OF MADONNA’S recent freebies: $10,000 mink and diamond-tipped false eyelashes.

ACCORDING TO Radar magazine, Owen Wilson was paid $100,000 to attend a Mercedes-Benz-sponsored Hamptons polo match. When other guests tried to speak with him, he reportedly said, “That’s not my job.”

See How the Poor Get Poorer.