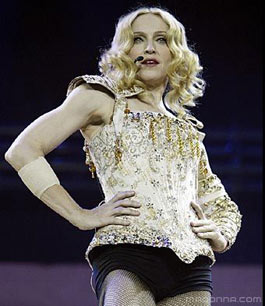 I went to see Madonna last night. I was one of her ‘front-row bitches,’ as she kept reminding us all through the night. I wasn’t even planning on going, much less getting such great seats but at the last second a friend of a friend who sleeps with the tour manager hooked up the tickets and I got to go for free. This made getting to be a front row bitch especially totally awesome.

I don’t normally gush like that but, according to WebMD, it’s common to the Madonna-shock decompression phase those lucky enough to see her live and that close normally go through post concert. Or it could be my thoughts were scrambled by a celebrity virus, a secret government-implanted psychotropic program piggybacking onto my own brainwaves, so as to mimic diva worship, while actually subjugating me to a much more sinister world domination agenda.

Call me paranoid. But hey, I attended the Madonna concert right after spending the weekend at Conspiracy Con 2006, a gathering of folks who swear Humpty Dumpty was the victim of an inside job. This of course is based on the piece of eggshell unaccounted for in the official investigation, and which mysteriously disappeared along with the original ballistics report. Remember, there are no coincidences and nobody just “falls” off a wall.

Before being asked to speak at Conspiracy Con, to provide a little comic relief (totally reciprocal), I’d always thought of myself as naturally skeptical. I had always assumed we weren’t being told the truth by the people in charge, certainly not the whole truth, especially about who’s actually in charge.

Turns out, I was just a conspiracy virgin.

Did you know fluoride is put in the water to make people more susceptible to mind control? Ever wonder why you sabotage a perfectly good romantic relationship? Answer: alien manipulation. Who runs the world? Not even people at all, but shape-shifting humanoid descendents of an extra-terrestrial reptilian bloodline, including both Bill Clinton and George Bush, and the Girl Scouts. Oh, and Kris Kristofferson.

Yes, I had a blast and learned a whole hell of a lot. It was like meeting all the people who call in to my favorite wee-hours radio show, “Coast to Coast.” The crazier the call, the more it’s taken seriously. “I see, and you’ve developed an engine powerful enough to travel through black holes, that runs on nothing but bread crumbs soaked in apple-cider vinegar? Sure, hold the line. We’ll get you a number of somebody over at the Pentagon that you can talk to about your amazing invention.”

But I have to admit it got a little overwhelming. So I took a break at one point and stopped in at the other convention going on right next door. The Nor-Cal Charismatic Catholic Convention. Everybody here was on their feet, hands in the air, body-language reflecting complete spiritual surrender, and they were in the middle of a follow-the-bouncing-ball sing along of praise. Not surprisingly, my gut reaction to that kind of blind faith, was to think, “Boy, too much fluoride in the holy water.”

Seemed to me all those skeptics and charismatics in the same hotel would kind of cancel each other out. Plus, I found the conspiracy theorists much more charismatic. Occasionally, everybody would end up crammed into one elevator together, the charismatics with their Bibles in hand, versus the skeptics and their literature, “The Atlantis Coverup,” “What Disney Doesn’t Want You To Know,” and “Was Jehova an ET?” Nobody ever said anything and tolerant smiles of mutual disapproval prevailed, as people pressed the buttons for their respective floors.

So anyway, that night, there I was riffing about all this on stage, getting a lot of love, I might add, from my own front-row bitches at Conspiracy Con. They had a great sense of humor about themselves, and didn’t mind being jibed about regarding the Geico Insurance lizard as a subliminal messenger from the gator-headed ruling class. It went so well that I am going to have to up my price for appearing at paranoia-related events.

Resetting my price is actually something I picked up at a seminar I attended just prior to the Conspiracy weekend, called “Secrets of a Millionaire Mind.” I wasn’t planning on going to this, either. But at the last second a friend of a friend who sleeps with a very poor financial empowerment coach hooked up the tickets. The main idea at this herd-mentality fest was that we, you and I and everyone we know are programmed from childhood to make exactly however much money we make. Apparently, I never recovered from declaring bankruptcy at my lemonade stand.

Nothing stirs up religious fervor like the promise of making more money. So everybody here was on their feet, too. Only this time, people whose body language reflected embarrassingly low FICO scores, were high-fiving each other for two hours, yelling, “You have a millionaire mind!” This, presumably, helps somehow, to reset the financial thermostat from room-temperature to a very sweaty baby-got-bank level of wealth.

I felt an immediate economic bounce afterwards, mainly because that’s when I found out I was going to see Madonna for free. At the concert itself I felt even richer, wondering how much all these suckers around me paid for their seats. I didn’t realize, though, exactly how primed I was to see her, thanks to all my newly uploaded mental programming.

She arrived in a glittery UFO, descending through the dark coliseum, a huge mirrored disco ball, an egg reconstructed from a million little shiny pieces of shell. She emerged. Her body resembled that of an earth woman, especially her breasts, but too perfect for her well-publicized age.

Did I mention I was sitting right up front? I’ve never even been that close to the turkey at Thanksgiving dinner. Her appeal was paranormal. Beyond superstardom, and approaching the pop-spiritual. I felt I was in the presence of a shape-shifting daughter of the Illuminati, a Manchurian material girl, a queen of mind-control with a multi-millionaire mind by whom I desperately wanted to be abducted.

It was totally awesome. Resistance was futile.