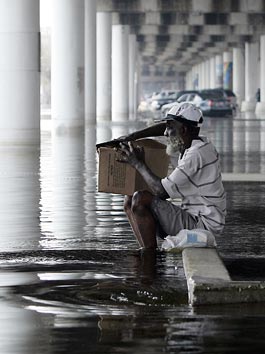 Post-Katrina Aftermath: How the Labor Department Fell Down on the Job
By Brian Beutler
The nation’s worker protection agency has been in slow decline for a generation, the consequences of which were evident in New Orleans, where predatory reconstruction employers were allowed to thrive. The conclusion of a two-part series.
July 18, 2007

Why Are They Making New Orleans a Ghost Town?
By Bill Quigley
The longer the poor and working class stay away, the more likely it is they’ll never return.
October 31, 2005

Hard Questions About the Big Easy
By Paul Rogat Loeb
The New Orleans disaster could yet change American politics—but only if we keep talking about it
October 31, 2005

Hurricane Anything!
Cartoon by Mark Fiore
Thanks to hurricanes, you can do anything!
October 19, 2005

The Other Hurricane
By Mike Davis
Has the Age of Chaos begun?
October 7, 2005

Bayou Farewell
Mike Tidwell Interviewed By Erik Kancler
The Louisiana Bayou has been sinking for years, and now it’s almost gone—taking New Orleans and Cajun culture with it.
October 3, 2005

The Mysteries of New Orleans
By Mike Davis and Anthony Fontenot
Twenty-five Questions about the Murder of the Big Easy
September 28, 2005

A Category-Five Q&A from “Pond Zero”
By Bill Santiago
My exclusive interview with an anonymous high-ranking senior official
September 28, 2005

Katrina and Deficits: Right Topic, Wrong Questions
By Gene Sperling
What about the much worse fiscal damage done by Bush’s economic policies?
September 22, 2005

A Failed State
By JoAnn Wypijewski
With government unmasked as a hollow giant, and both parties equally accommodated to poverty in the midst of plenty, is it any wonder people look to God?
September 18, 2005

Corporations of the Whirlwind
By Tom Engelhardt and Nick Turse
The Bush-friendly companies that ate Iraq are preparing to do the same in New Orleans.
September 14, 2005

No Exit
By Alison Stein Wellner
Disaster evacuation plans throughout the US assume that people own a car. Too bad for the 23 million Americans who don’t.
September 13, 2005

“We’re not counting on the government to take care of us anymore“
By David Enders
Following Hurricane Katrina evacuees out of New Orleans.
September 12, 2005

Choose to Make a Difference
By Arthur I. Blaustein
The disaster in New Orleans makes at least one thing clear — the importance of serving our communities and being there for one another.
September 8, 2005

Surviving New Orleans
By David Enders
Residents still stranded in the city — many of them poor, many of them minorities — find ways to scrape by.
September 7, 2005

Sucker’s Bets for the New Century
By Bill McKibben
The U.S. After Katrina
September 7, 2005

New Orleans: Iraq in America
By Tom Engelhardt
The Perfect Storm and the Feral City
September 5, 2005

Mother Jones Radio: Why Was Katrina’s Impact So Huge?
Despite what President Bush says, a disaster on the Gulf Coast has been predicted for years.
September 4, 2005

9/11 in New Orleans
By Paul Rogat Loeb
This time, will we draw the right lessons from a tragic disaster?
September 2, 2005

Did New Orleans Catastrophe Have to Happen?