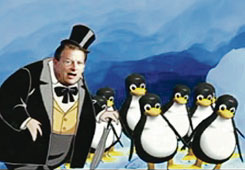 Really, we should have blogged about this a week ago. Still, it bears repeating that Antonio Regalado and Dionee Searcey of the Wall Street Journal reported that the popular YouTube video portraying Al Gore boring a few penguins with his talk on global warming appears to be the product of “DCI Group, a Washington, D.C., public relations and lobbying firm whose clients include oil company Exxon Mobil Corp.”

Ok, so this is insidious on a couple of levels. First, as Chris Mooney, author of The Republican War on Science, reported in a great investigative piece in Mother Jones, ExxonMobil has funded a vast array of think tanks and opinion makers (including FoxNews.com columnist Stephen Milloy) who—call it coincidence—are all major players in the debunking global warming movement. Really, it’s hard to call it a movement, since as Mooney’s article so clearly proves, all the major climate change debunkers receive funding from ExxonMobil.

The Gore video is just the latest example of the carefully crafted distance between those Exxon funds, and the convenient message they then spew out. To wit:

Dave Gardner, an Exxon spokesman, confirms that Exxon is a client of DCI. But he says Exxon had no role in creating the “Inconvenient Truth” spoof. “We, like everyone else on the planet, have seen it, but did not fund it, did not approve it, and did not know what its source was,” Mr. Gardner says.

But as the Journal also points out:

The anti-Gore video represents a less well-known side of YouTube. As its popularity has exploded, the public video-sharing site has drawn marketers looking to build buzz for new music releases and summer blockbusters. Now, it’s being tapped by political operatives, public relations experts and ad agencies to sway opinions.

Hipsters beware. (And, also, haven’t the penguins been through enough lately? And in Texas, already.)

Full WSJ story after the jump.

Where Did That Video Spoofing Gore’s Film Come From?
By ANTONIO REGALADO and DIONNE SEARCEY
August 3, 2006; Page B1

In the video, Mr. Gore appears as a sinister figure who brainwashes penguins and bores movie audiences by blaming the Mideast crisis and starlet Lindsay Lohan’s shrinking waist size on global warming. Like other videos on the popular YouTube site, it has a home-made, humorous quality. The video’s maker is listed as “Toutsmith,” a 29-year-old who identifies himself as being from Beverly Hills in an Internet profile.

In an email exchange with The Wall Street Journal, Toutsmith didn’t answer when asked who he was or why he made the video, which has just over 59,000 views on YouTube. However, computer routing information contained in an email sent from Toutsmith’s Yahoo account indicate it didn’t come from an amateur working out of his basement.

Instead, the email originated from a computer registered to DCI Group, a Washington, D.C., public relations and lobbying firm whose clients include oil company Exxon Mobil Corp.

A DCI Group spokesman declines to say whether or not DCI made the anti-Gore penguin video, or to explain why Toutsmith appeared to be sending email from DCI’s computers. “DCI Group does not disclose the names of its clients, nor do we discuss the work that we do on our clients’ behalf,” says Matt Triaca, who heads DCI’s media relations shop.

Dave Gardner, an Exxon spokesman, confirms that Exxon is a client of DCI. But he says Exxon had no role in creating the “Inconvenient Truth” spoof. “We, like everyone else on the planet, have seen it, but did not fund it, did not approve it, and did not know what its source was,” Mr. Gardner says.

The anti-Gore video represents a less well-known side of YouTube. As its popularity has exploded, the public video-sharing site has drawn marketers looking to build buzz for new music releases and summer blockbusters. Now, it’s being tapped by political operatives, public relations experts and ad agencies to sway opinions.

For marketers and pranksters of all sorts, online video is the latest venue for tactics “they’ve been doing for years,” says Fred Wertheimer, president of the watchdog group Democracy 21. “What we don’t know is will this have any impact. In the political arena it’s the great experiment right now.”

Politicians and marketers already make wide use of email lists and blogs, and it has long been possible to distribute information over the Internet while disguising its origins. But Web video operates on a different level, stimulating viewers’ emotions powerfully and directly. And because amusing animations with a homespun feel can be created just as easily by highly paid professionals to promote agendas as by talented amateurs, caveat emptor is more relevant than ever.

One politically charged issue has drawn dueling YouTube videos recently: whether phone giants should be able to charge Internet companies for speedier delivery of their content. One of the videos features a slide show and tinny voiceover, and takes the side of phone companies. At the end, it directs viewers to go to www.netcompetition.org, a Web site backed by AT&T Inc. and other phone and cable companies with a stake in the issue. On the other side are consumer groups, one of whose YouTube videos features musician Moby warning of the dangers of a two-tier Internet.

Mr. Wertheimer thinks videos like the Gore spoof, whose sponsorship is vague, can be disingenuous. “They’re coming in under false pretenses — under the guise of being a clever video you might be interested in,” he says. For its part, AT&T says its affiliation with the group is clearly listed on netcompetition.org, just a few clicks away.

DCI is no stranger to the debate over global warming. Partly through Tech Central Station, an opinion Web site it operates, DCI has sought to raise doubts about the science of global warming and about Mr. Gore’s film, placing skeptical scientists on talk-radio shows and paying them to write editorials.

Of course, Mr. Gore and his allies have also used the Internet to great advantage. To stoke interest in his film, the distributor of “An Inconvenient Truth,” Paramount Classics, created its own YouTube video by cartoonist Matt Groening, creator of “The Simpsons.” Called “Al Gore’s Terrifying Message,” the video, which features a cartoon version of Mr. Gore arguing with a robot, has had more than a million views. Paramount is identified as the source next to the video.

Meanwhile, critics of Mr. Gore have frequently sought to get their message out through conservative bloggers, talk radio and Internet news services. Marc Morano, communications chief for Republican Sen. James Inhofe of Oklahoma, who has led opposition to climate legislation on Capitol Hill, says an Internet strategy is both effective and necessary because mainstream news organizations are “promoting the message of Gore uncritically.”

Internet videos could prove particularly potent, because they may influence watchers in ways they don’t realize. Nancy Snow, a communications professor at California State University, Fullerton, viewed the penguin video and calls it a lesson in “Propaganda 101.” It contains no factual information, but presents a highly negative image of the former vice president, she says. The purpose of such images is to harden the views of those who already view Mr. Gore negatively, Dr. Snow says.

YouTube has an estimated 20 million viewers daily, but with thousands of videos on the site, it can be difficult for marketers to reach their audience, says Brian Reich, a consultant for Mindshare Interactive Campaigns, who helps nonprofits and political candidates learn to use YouTube and other video sites effectively. “You still have to micro-target your information and make it compelling and relevant and timely to get people to pay attention,” he says.

Traffic to the penguin video, first posted on YouTube.com in May, got a boost from prominently placed sponsored links that appeared on the Google search engine when users typed in “Al Gore” or “Global Warming.” The ads, which didn’t indicate who had paid for them, were removed shortly after The Wall Street Journal contacted DCI Group on Tuesday.

Diana Adair, a spokeswoman for Google, says the search giant doesn’t allow advertising text that “advocates against any individual, group or organization.” However, the policy doesn’t apply to the Web sites or videos that such ads point to. Although most advertisers want their identities known, Ms. Adair says Google will protect the identity of advertisers who want to remain anonymous, only releasing that information under a subpoena or court order.

–Jeffrey Ball contributed to this article.