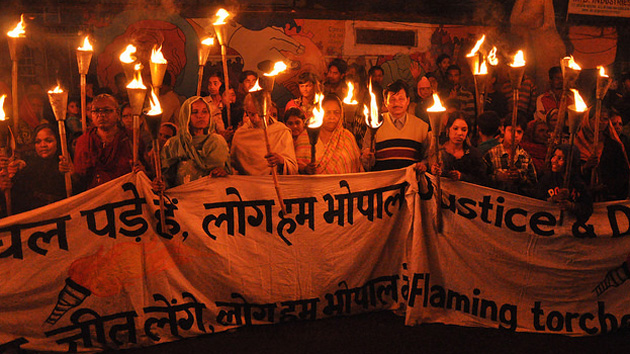 Survivors take part in a vigil on December 2, 2013, commemorating the 29th anniversary of the Bhopal disaster. <a href="https://www.flickr.com/photos/bhopalmedicalappeal/12221359203/in/photolist-jBXEiH-jBZMDo-9tncUy-hThr1b-jBZ1aB-dWV9h3-dfKmUe-5KzA7i-3xXD9-5KzzPM-5KzzS2-3w17P-o89Uyb-5KzAoc-eC3XN-gWVkXa-jC2RMu-jC2YtL-jBYT4n-jCadWN-jCcyRf-nosefM-hThBwb-nrrtwQ-oA1wTC-nvFBfY-nN1x89-89tTdd-aJ1Voz-hTayE1-noLWuC-dEvPyj-8HLeDi-hThb8z-5KDPVd-5KDQjW-5KzAaH-dR8MUP-dReqMo-dReiSh-dRehn3-dRek73-5KDQ2w-gzyk7m-DyL4k-oAbJtQ-oiHVZ3-dMcKVN-4t8SCe-gVtKjP">Colin Toogood</a>/Flickr

Editor’s Note: Warren Anderson passed away in a nursing home on September 29, 2014, a few months before the thirtieth anniversary of the Bhopal chemical spill. Anderson was 92.

Each year, on December 3, they march through Bhopal and set Warren Anderson on fire. Though they burn only an effigy of Anderson—the one-time CEO of Union Carbide, whose pesticide plant in 1984 unleashed poisonous gas that killed tens of thousands of people—the image is still raw: impoverished Indians venting their hatred at an elderly white man they blame for the worst industrial accident the world had ever seen until two Soviet scientists decided to run unauthorized tests in a nuclear outpost in Chernobyl.

The real Anderson is far away, in the Hamptons, where he leads a quiet life with his wife, tending to whatever one tends to in retirement—golf and dinner parties, according to published reports. Immediately following the disaster, he came to Bhopal, only to be detained and then released, never to return. Since 1991, when a Bhopal judge reinstated criminal charges against him, Anderson has been an “absconder” from justice; in 2003, the U.S. State Department denied India’s request for his extradition. “For a lot of people, he is a symbol of their anger,” says Casey Harrell, the former Greenpeace staffer who, in 2002, symbolically served Anderson with a Bhopal arrest warrant. “They want to pin their frustrations and lack of compensation and even lack of acknowledgment of what happened on him.”

That might be gratifying, but the problem is that while Anderson might have rubber-stamped cutbacks at the Bhopal plant that left scant safety measures in place, the story of who or what should be held accountable is a twisted legal narrative—a modern parable for what can happen when things go wrong with a multinational’s interests abroad.

This is what we can firmly know: Early on December 3, 1984, a plant belonging to an Indian subsidiary of Connecticut-based Union Carbide released a cloud of toxic methyl isocyanate. An estimated 7,000 people died outright, others were trampled to death trying to flee, still others died of poisoning soon after. Union Carbide claimed the accident was the result of employee sabotage and that officers of its subsidiary—Union Carbide India Ltd.— falsified data to cover their tracks, but it insisted that the parent company shouldn’t be held accountable for these acts.

The lawyers who worked for the Indian government on behalf of the victims disagreed. Using a new legal strategy coined “multinational corporate enterprise liability,” they claimed Union Carbide was liable for anything under its purview—including the actions or inactions of its subsidiaries. “Our chief complaint was that Union Carbide designed a safety system that was flawed,” explains victims’ attorney Michael V. Ciresi. “The system was designed in America, and Union Carbide was responsible.” Five years of legal wrangling led to a 1989 civil settlement of $470 million paid to India in exchange for waiving criminal charges brought against both the company and Anderson, who retired in 1986.

But then the plot diverges. Survivor advocacy groups complained that Anderson had been let off the hook. And though the Indian Supreme Court had ruled that he wouldn’t have to face legal charges, in 1991 the court decided, much like an NFL referee, that upon further review amnesty from criminal prosecution was not linked to resolution of a civil suit after all. Warrants for Union Carbide and Anderson were reissued. Anderson, who in 1985 declared, “Maybe I wish to be remembered for resolving an issue like Bhopal,” now declared himself unwilling to submit to trial in a country where he was unlikely to face an unbiased judge. In 1994, Union Carbide sold UCI Ltd. to a holding company; Indian criminal charges are still pending against the subsidiary’s former officers.

In 1999, Indian American attorney H. Rajan Sharma filed suit under the U.S. Alien Torts Claims Act (ATCA), which provides for civil remedies for “crimes against humanity.” That case is now stuck in the appeals process. In 2001, Dow Chemical purchased Union Carbide for $10 billion, inheriting Sharma’s suit and the rest of its bitter legacy. Like Union Carbide before it, Dow claims that the accident was the result of sabotage by one employee, whom it refuses to name.

At this point, directing wrath at Anderson, now 85, may be futile. (He hasn’t talked publicly about Bhopal in years.) Worried about appearing anticorporate, in 2002 the Indian government moved to downgrade the homicide charges against him. Though the Indian courts refused to go along, the prospects for a trial are dim. Meanwhile, the $470 million awarded to survivors—$550 each—has been distributed so slowly that $390 million remains in the fund. Bhopal is still environmentally unsound, its groundwater toxic. Bhopalis have very high rates of respiratory and vision problems, and depression. “Union Carbide, and now Dow, are claiming this is settled. But the bottom line is that things aren’t settled because the problem isn’t solved,” says Amnesty International’s Amy O’Meara. “More than 100,000 people are still suffering. People are still getting sick to this day. If it was settled, there wouldn’t be environmental and human rights violations—which there are.”