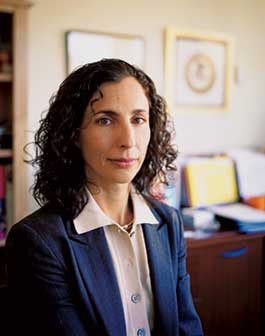 Melanie Sloan is the mastermind of a vast left-wing conspiracy—a cunning operative whose phony “watchdog” group, bankrolled by a shadowy billionaire, is out to smear politicians and manipulate elections. At least that’s how Republicans were talking about her last fall as the headlines filled with a seemingly endless list of gop congressmen in trouble. Cloistered in his Illinois home after news of Rep. Mark Foley’s emails to pages broke, House Speaker Dennis Hastert railed about “Democratic operatives, people funded by George Soros” who had publicized the scandal—a not very veiled reference to Sloan’s organization, Citizens for Responsibility and Ethics in Washington, or crew. “When the base finds out who’s feeding this monster,” Hastert cryptically warned, “they’re not going to be happy.” Embattled congressman Curt Weldon (R-Pa.), always a fan of conspiracy theories, got right to the point: “[Sloan’s] goal is to try to embarrass me or somehow hurt me so that the Democrats take control,” he told a reporter after the fbi raided the homes of his daughter and her business partner while investigating whether Weldon had used his position to steer business to their lobbying firm. “I assume she’s hoping that if the Democrats win, she’ll get a job on the Hill again.”

In person, Sloan doesn’t quite live up to such ominous billing. When I stopped by her office one afternoon last fall, the petite former prosecutor seemed a bit weary, slouching slightly in her chair and speaking in the rapid bursts of someone who’s been surviving on caffeine. She’d been going nearly nonstop since Foley had announced his resignation on a Friday in late September, a day that Sloan had planned to take off early for the first time in months to catch a wine tasting. As the Foley and Weldon scandals took center stage, her BlackBerry rang late into the night with reporters seeking comment—both on the scandals and on her alleged role as the string-puller. “They cannot take responsibility for doing the wrong thing,” she said, “so it has to be my fault.”

It’s not as if crew‘s critics are entirely wrong. In Weldon’s case, Sloan had indeed asked the Justice Department to look into whether the congressman had violated a federal bribery law after the Los Angeles Times revealed the alleged lobbying quid pro quo. But that was more than two years ago, and Sloan says she’s baffled that it took the fbi so long to act. It is also true that crew had copies of Foley’s emails to a former congressional page months before the scandal broke; Sloan, who has experience prosecuting sex crimes, says she immediately forwarded the emails to the fbi. (Brian Ross, the abc reporter who broke the story, has said he didn’t get the emails from crew.) And it’s true that crew has gotten funding from George Soros’ Open Society Institute—a one-time $100,000 grant in 2006. Sloan says she was actually inspired to ask for the funding after conservatives began tying her to Soros in 2005. “osi was very worried about whether we were non-partisan enough,” Sloan recalls, “so it took a while to persuade them. I had to talk to them about all the Democrats we’ve gone after.” In the wake of the Democrats’ sweep of Congress, Sloan wasted no time reminding the public of their transgressions, starting with Rep. John Murtha’s spotty ethics record.

If nothing else, crew‘s turn as a gop bugaboo is a sign of Sloan’s success. Tom Fitton, the president of Judicial Watch, a conservative watchdog group founded in 1994, notes that “corruption is a growth industry” in Washington. “To be clear, I think that crew has a liberal agenda,” Fitton adds. “I say that in a descriptive way, not a pejorative way.”

Sloan founded crew in February 2003 after spending four years in the U.S. Attorney’s Office in Washington and working for the Senate and House judiciary committees before that. The idea was not hers; she was approached by Norman Eisen, a Washington lawyer, and Louis Mayberg, the president of a Maryland-based mutual fund company. Both men have contributed to Democratic candidates and causes, giving a combined $38,000 over the past three election cycles; Mayberg also gave $2,000 to Bush/Cheney in 2004.

It wasn’t long before Tom DeLay got to know Sloan by name, at one point asking the House Rules Committee to hold crew in contempt of Congress for its role in helping draft an ethics complaint against him in 2004. “I thought, ‘This will be great—they can lock me in the basement of the Capitol,'” Sloan recalls. “I thought fundraising would never be a problem again.”

As Sloan worked to build her case against DeLay, compiling evidence turned out to be the easy part (the 18-page complaint was appended with 25 exhibits). The hard part was getting people to pay attention: “When I first started talking to reporters in Washington, particularly about Tom DeLay, nobody would write a thing,” Sloan says. “They said, ‘Everybody knows that, what’s your new story there?'” House members had even established an “ethics truce,” with members agreeing not to file complaints against one another.

In the end, it was DeLay’s own strategy that proved his undoing. Chris Bell, a freshman Democrat whose seat was doomed by the majority leader’s Texas redistricting plan, agreed to go against his own party’s leadership and file the complaint, which in 2004 resulted in a unanimous admonishment by the House Ethics Committee. To Sloan, it was a turning point. “People started writing ethics stories in a way they hadn’t been,” she says.

crew would later take on Rep. Randy “Duke” Cunningham, the California Republican whose graft was so brazen that he devised a “bribe menu” on congressional stationery (the payoff for steering a $16 million contract to one company was a $140,000 yacht), as well as congressmen Bob Ney (R-Ohio) and John Doolittle (R-Calif.), both ensnared in the Jack Abramoff scandal. And crew has been representing Joseph and Valerie Plame Wilson in their lawsuit against Vice President Dick Cheney, his former aide Scooter Libby, and Karl Rove.

Sloan is quick to point out that dirty dealings are not endemic to one side of the aisle. “Things were very bad when the Democrats lost the House in ’94. Forty years in control made them arrogant. It just didn’t take the Republicans nearly so long to surpass that level of corruption.”

Having started out as a one-woman shop, crew now has a staff of 13 with a new office not far from K Street. In August, crew opened its first regional branch in Colorado—an experiment, Sloan said, “to see if we can do at the state level what we do at the federal level.”

Sloan can’t imagine herself sticking with the corruption beat forever, though. Some of the attacks have gotten to her, she acknowledged. “This is too nasty,” she said, her gaze turning distant. “Politics is such a vicious business, and people will attack you mercilessly.” Then she quickly added, “But it’s not that I’m not thick-skinned enough to take it.”