Coachella, it should be said, contains multitudes, and I don’t just mean 60,000 hipster kids wandering around the desert. With so much music happening all at once, your experience of the festival is shaped by your choices, your luck, and how fast you can walk. So I, along with my intrepid photographer Kristi, tried to sample as many performers as possible. Here’s what we saw on the first day of the first three-day Coachella in the event’s 8-year history.

4:55 pm – We arrive at the polo grounds in the searing late-afternoon heat, and head straight for Of Montreal, a synthy, power-pop band from Georgia. Charismatic band leader Kevin Barnes is wearing, uh, some sort of kelly green and white spaceman outfit. His band mates wear wings and glitter. They’re really good. 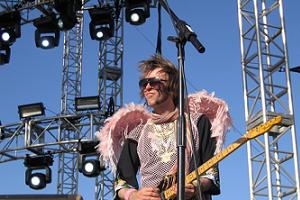 Above: Of Montreal, it gives you wings

5:35 pm – Outfit change: Barnes emerges from the wings in sky blue hot pants, to sing about wanting a lover with “soul power.” Their goofball, DIY aesthetic is actually backed up by solid songs, and when the band launch into an extended intsrumental jam, all the hands in the audience are in the air.

5:41 pm – Another outfit change: A ladder is brought out with a giant silver poncho, into which Barnes inserts himself.

6:25 pm – Arctic Monkeys are on the main stage, kicking off their set with the new single, “Brianstorm.” Kristi goes down to take pictures in the photo pit, and when I look up, she’s on the Jumbotron. 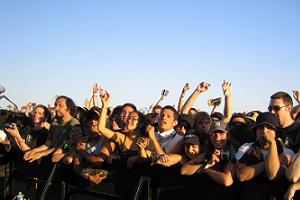 Above: Audience for Arctic Monkeys asks, “Didn’t we see you on the Jumbotron?”

7:05 pm – Everybody wants to go see Rufus Wainwright on a side stage. I don’t like Rufus Wainwright. But we trudge over. I run to the dance tent to see if Digitalism are still playing — nope. On the way I run into the Energy Factory, a sort of environmental exhibit-slash-art installation. Solar powered metal sunflowers are slowly spinning in the grass, bamboo T-shirts are for sale, and a fleet of stationary bicycles are set up, connected to cell phone chargers. A couple people are gamely pedaling along. I could use a charge since I’ve been texting like a madman, but my feet are tired. Giant banners advertise environmental bullet points; I think they’re made of vinyl. 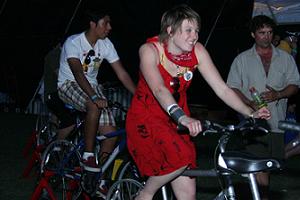 Above: The biking for minutes cell phone plan

7:30 pm – Reluctantly I return to Rufus, who’s wearing some sort of stripey robe and pointy hood that makes him look like a fashion-conscious white supremacist. “Here we are in the desert,” he says, “where all the rejects go: the Jews… the gays…” There’s wild applause after “the gays,” but not after “the Jews.” He sits down at the piano and sings an actually rather lovely lament about being tired of America. 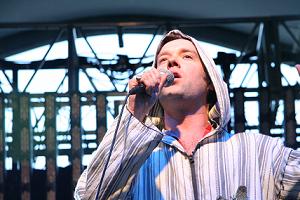 7:55 pm – A brief foray into the dance tent sees Felix da Housecat DJing to an overflow crowd. He does a simple trick with the eq where he filters out more and more of the bass until the sound is just a distorted hiss; the crowd goes wild. Note to self: try that at next DJ gig.

8:00 pm – In what appears to be a reference to the 2004 performance by Arcade Fire on the same stage, Peaches is climbing the scaffolding. 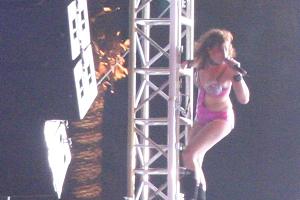 Above: You’ll need to f*** the pain away if you fall off of there Peaches.

8:15 pm – Return to the main stage area for Jesus and Mary Chain. Reunited or long-lost 80s heroes have a mixed track record at Coachella (see The Cure, New Order, and Bauhaus, who were all pretty terrible), but the Chain are awesome. “Reverence” sounds just as shocking, and as good, nearly 20 years later.

8:28 pm – The rumors come true: Scarlett Johansson joins the Jesus and Mary Chain for backup vocals on “Just Like Honey,” consisting of approximately 17 seconds worth of singing.

8:45 pm – Jarvis Cocker seems more interested in chatting with the audience than playing music. “Festivals in England have too much water,” he rambles, “but here, I saw a lorry practically pissing water all over, just to keep down the dust.” The third song, “One Man Show,” with its sad lyrics about being a lonely guy and having a “hot date with a baked potato,” hit a little too close to home, and we take off. 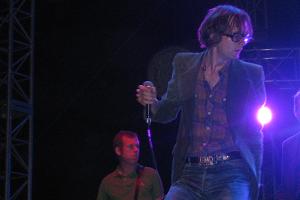 9:15 pm – Now comes the first, and perhaps most difficult, of the “Sophie’s Choices” this weekend: Interpol, Sonic Youth and Faithless are all playing at the same time. We head for Interpol, who open their set with dramatic blue lighting and a Depeche Mode-reminiscent new track. The set is solid if a little dour for the party atmosphere. 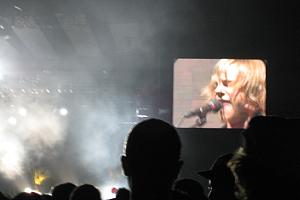 Above: Interpol, via Jumbotron

10:05 pm – We head to the dance tent for Faithless, catching the tail end of “Mass Destruction.” I’m surprised at how empty it is, until the next two songs: a cheesy and soul-less mid-tempo dance number about, like, love, or wondering where the love is, or something, and a horribly over-sung ballad. We have no time for filler, Faithless, and we are out of here.

10:35 pm – Sonic Youth are my heroes. Performing material from Daydream Nation as well as more recent tracks like “Do You Believe in Rapture” and “100%,” the band are energetic and alive, and the open-tuned guitars ring out into the desert air. Kim Gordon dances better than women half her age. The video backdrop is showing what looks like home movies of an aquarium.

10:45 pm – From afar, we hear the opening strains of “Earth Intruders” coming from the main stage as Bjork kicks off her set with the new single, which I had hoped to hear, but no luck. After a 15-minute obstacle course through thousands of exhausted, supine concert-goers, we make it to the VIP corral, where everyone is grooving to Bjork’s “greatest hits” set. “We saw Paris Hilton,” my friends tell me. “And Adam Brody.” Bjork does “Joga” with horns doing the string parts. It’s actually pretty good, but there’s a hot tub waiting for us back at the rental house, and that’s as much of a part of the Coachella experience as anything else.

Stay tuned: tomorrow, will Arcade Fire choke under the main stage pressure? Will anybody be able to get into the side tent for Peter Bjorn & John? Will the presence of Red Hot Chili Peppers bring the ratio of puka shell necklace-wearing frat bros into the stratosphere? Stay tuned… now where’s my Margarita?