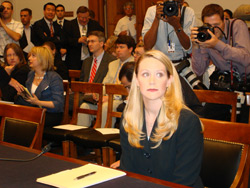 “So, what do you say, is she going to cry?” one reporter quipped to another, as they settled in to watch Monica Goodling’s long awaited testimony before the House Judiciary Committee. The reporter was referring to an episode in March, not long before she resigned from the Justice Department, when Goodling, realizing the gathering political storm over the purge of nine federal prosecutors seemed likely to upend her fledgling career in government, broke down in the office of her colleague David Margolis. “She proceeded for the next, it seemed like forever but it was probably only about 30 or 45 minutes, to bawl her eyes out and say, ‘All I ever wanted to do was serve this President and this administration and this department,'” Margolis told congressional investigators.

All indications are that it was Goodling’s fealty to president and party over her loyalty to the department itself that proved her undoing.

Yesterday, dressed in a dark suit and flanked by four lawyers, Goodling, who asked for and received immunity in exchange for her testimony, appeared nervous though composed as she took her place in front of a full session of John Conyers’ powerful committee. One of three senior Justice Department officials who has been forced to resign in the wake of the U.S. Attorney firings, Goodling is a 1999 graduate of Pat Robertson’s evangelical law school and a party loyalist who once did opposition research for the Republican National Committee. She rose quickly through the ranks of the Justice Department, becoming senior counsel to Attorney General Alberto Gonzales as well as the agency’s liaison to the White House. Granted the authority to hire and fire a range of Justice Department officials, political appointees as well as career staffers, she often questioned candidates on their ideology and once stalled the hiring of an applicant for a nonpolitical position deeming him too “liberal.” “I know I took political considerations into account on some occasions,” she told Congress yesterday. “I know I crossed the line.”

Beyond placing wagers on whether thirty-three-year-old Goodling would shed tears of contrition (or merely self pity), members of the press were anticipating that her testimony would finally shed light on the extent of the White House’s involvement in the prosecutor firings. Indeed, former New Mexico U.S. Attorney David Iglesias, one of the fired prosecutors, has suggested that he believes Goodling holds the “keys to the kingdom.” Her voice quivering as she made her opening statement (she never broke down, though) Goodling quickly dispelled the notion that her testimony would illuminate the role of the White House in the firings. “I did not hold ‘the keys to the Kingdom’ as some have suggested,” she said.

She did, however, drop a bombshell when she told Congress that Deputy Attorney General Paul McNulty, who announced his resignation in May, had not been “fully candid” when he testified before the Senate Judiciary Committee in February. While McNulty has accused Goodling and Sampson of withholding information about the role of the White House in the prosecutor purge, Goodling shifted the blame back to him. “The Deputy’s public testimony was incomplete or inaccurate in a number of respects,” she said, joining the circular firing squad of accusations and counter-accusations that has characterized this scandal. Among other things, Goodling told Congress that McNulty was less than candid with Congress about “White House involvement in the replacement decision” and “failed to disclose that he had some knowledge of the White House’s interest in” installing Karl Rove’s protégé, Tim Griffin, as the U.S. Attorney for the Eastern District of Arkansas (a position that opened up when the Justice Department forced out Bud Cummins). If true, Goodling’s testimony suggests that McNulty may have intentionally misled Congress and could pave the way for a possible criminal investigation. McNulty, for his part, did not waste any time firing back, issuing his own statement yesterday denying Goodling’s allegations: “I testified truthfully at the Feb. 6, 2007, hearing based on what I knew at that time. Ms. Goodling’s characterization of my testimony is wrong and not supported by the extensive record of documents and testimony already provided to Congress.”

Though congressional Democrats clearly hoped Goodling’s testimony might expose the involvement of Rove and former White House counsel Harriet Miers in replacing the prosecutors, she testified that she “was not the primary White House contact for purposes of the development or approval of the U.S. Attorney replacement plan” and claimed she she never spoke with Rove or Miers “about the hiring or firing of any U.S. Attorney.”

While Congress has yet to uncover the extent of the White House’s role in the prosecutor purge, members of the House and Senate Judiciary committees seem determined to press on. But to truly get to the bottom of the scandal, Congress will need to hear from White House officials. So far, though, the adminstration has balked at allowing Miers or Rove to testify publicly. “The only way we can get to the full truth is if Karl Rove is sitting in the very same seat you are sitting in, and he needs to be here posthaste,” said Sheila Jackson-Lee the Texas Democrat.