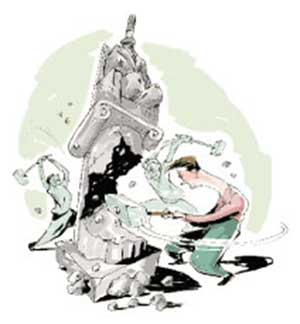 Google “open-source politics” and among the top hits is a November 2004 Nation article by writer and campaign-reform activist Micah Sifry. In it, Sifry recalled a seminal moment early in Howard Dean‘s presidential run when a staffer posted an “Ask the Dean Campaign” thread on the anti-Bush website Smirking Chimp. Within a day, there were 400 comments—a lot at the time—many of them professing amazement that campaign staffers were actually responding. “Never before had the top-down world of presidential campaigning been opened to a bottom-up, laterally networked community of ordinary voters,” Sifry wrote.

Of course, Dean lost. But the following year, Iraq veteran Paul Hackett almost knocked off a powerful incumbent congressman in Ohio thanks to the liberal blogosphere. By the 2006 election cycle, MoveOn was able to raise almost $1 million in a single day, “macaca” felled Virginia Senator George Allen, and on Election Day Senate Majority Leader-to-be Harry Reid posted a personal message on Daily Kos thanking the site’s users. These days, D.C. sounds like Silicon Valley circa 1998, with everyone peddling some New New Thing.

But what, really, is new? At best, the potential exists for the political equivalent of software’s open-source movement: a system in which the best results are accomplished not by secretive, commercial, top-down, individual effort but by communities of interested people wielding collective, uncopyrighted, free, and yes, democratic tools. Open-source politics is about more than having a MySpace page or courting the blogosphere. It’s about a different notion of leadership, says Peter Leyden of the netroots-focused New Politics Institute: “The 20th century was the cult of the artiste, the director, the president or the CEO, the mad genius who knows everything and controls everything. But the way our economy works now, the way our media works now—it’s increasingly made up of all kinds of people contributing at all different levels. Why wouldn’t our politics work like that, too?”

Why not? Well, mostly because politics today is antithetical to the open-source principle in every way. It is about controlling the candidate, controlling the message, controlling who participates when, where, and how, down to—as Karl Rove has so well demonstrated—tailoring door-knocking strategies with the help of consumer credit card data. It is about lobbyists, donors, bundlers, consultants, ad makers, and the rest of the political-industrial complex. Why would this crowd suddenly abdicate to the crowd? In fact, it’s evident it won’t: This spring’s much-hyped new-politics moment, the “Hillary 1984” ad, came courtesy of a political consultant (see The Attack Ad’s Second Life). In May, Barack Obama, whose campaign built a social-networking site before he even announced, unceremoniously grabbed control of the hyperpopular Obama MySpace page a fan had painstakingly built (see Stupid Tech Tricks). In the space of a few short years, some bloggers have become remarkably Boss Tweed-like (see Meet the New Bosses). And thus far all this digital-democracy stuff involves, at best, a tiny portion of the voting-age population and skews heavily white and male. So isn’t this just a slightly younger, hipper, and more chaotic version of the same old circus?

Open-source politics has the potential to fundamentally change the way we govern ourselves—to fulfill the democratic promise that Web 1.0 pioneers dreamed of before they grabbed for the ipo brass ring. It also has the potential to become exactly what Web 1.0 turned into—a delivery system where most of us are mere “customers.” To get a sense of what’s hype and what’s real, we surveyed bloggers, politicos, and all manner of netizens. The full interviews can be found here; excerpts appear throughout this package.

andrew rasiej
techpresident.com
In political life, an organized minority is always stronger than a disorganized majority. And organizing is easier on the Internet.

Jimmy Wales
wikipedia founder
We are going to be returning to an era of participatory politics rather than broadcast politics.

Lawrence Lessig
culture-sharing guru
In the analog world, it wasn’t really that anyone was stopping ordinary people from becoming political actors, it was that the costs of doing so were so much larger. The technology is unleashing a capacity for speaking that before was suppressed by economic constraint.

Nicholas Lemann
columbia journalism school dean
I question whether this model never existed until now. I think that’s a little ahistorical. I would call it pluralism, which is just an old-fashioned political term.

Howard Dean
dnc chair
The Internet is the most important tool for redemocratizing the world since Gutenberg invented the printing press.

Micah Sifry
personal democracy forum cofounder
We’re talking about a medium where the cost of entry has dropped to near zero. We used to have a vibrant partisan press in America, back when the cost of entry was $10,000 or $15,000 in today’s dollars. Then when the Industrial Age flowered, the cost of producing a newspaper zoomed to a million. We’ve now returned to an age where anybody with a little bit of effort, but not a lot of capital, can be heard by millions.

Chris Rabb
afro-netizen.com
The people who could afford to sleep on Howard Dean‘s couch in Vermont are the same people who can raise the money to build a digital consultancy or a social-networking site. They have the social capital to raise real money, which the African American middle class, which is much poorer than the white middle class, can’t afford to do. It’s the same segregation that exists offline.

Bob Garfield
advertising age, on the media
We are still talking about a narrow slice of the public here. Maybe only 10 percent of the public is truly engaged, but that 10 percent really dominates and controls the discussion.

michael turk
bush 2004 e-campaign director
The party out of power tends to gravitate toward whatever the most interactive, niche medium is. When the Republicans were out of power, they really developed direct mail. Then they went to talk radio. By the time 2000 rolled around, the Democrats never looked to talk radio, because it was still more of a sender-receiver model.

The median political blog reader is a 43-year-old man with a household income of $80,000.

75% of political blog readers are male.

18% of political blog readers have their own blogs. 36% say they blog to influence public opinion.

37% of political blog readers say that TV is “worthless.”

13% of gays, lesbians, and bisexuals regularly read political blogs, versus 8% of straights.

61% of political blog readers gave money to candidates in 2004.

david weinberger
dean 2004 internet adviser
I’ve learned the dangerous lesson of the web: You succeed by giving up control, and that’s the inverse of the normal campaign. The degree to which campaigns have become dominated by marketing is breaking the spirit of democracy, and we’re all just so sick of it, across party lines. So now we have an opportunity to undo a lot of that, but it involves some difficult choices. The most difficult choice is just to wake up and smell the coffee.

Peter Leyden
new politics institute director
It is conceivable in this cycle that you could have 10 million people who will wake up and think, “I’m going to do something for the campaign, and it ain’t going to be coordinated by the candidate or the campaign staff at the top. I’m going to make a commercial today and send a viral message to everybody I know, and I’m gonna get all my friends to pitch in 25 bucks.” It’s going to be that kind of politics.

Jerome Armstrong
mydd.com
If you begin to go down that road of involving people in your policies—not necessarily forming them, but having input—it’s going to lead to more accountability once a candidate gets into office. A lot of times candidates promise such and such, but there’s nothing like the written word to hold them accountable in the end.

ben smith
politico.com
What would genuinely be open source is to allow your supporters to run the campaign. Most people in politics don’t do it because they think it would be a terrible idea.

henry jenkins
m.i.t. professor
If the central conversation about the election is only online, rather than through broadcast television, large numbers of people will simply not have access to what the candidates are saying. Moving all this activity online suggests that they don’t count, their voices don’t matter.

glenn reynolds
instapundit.com
There’s plenty of time for Republicans to step up their game, but I’m skeptical they will do it. They’ve gotten so used to winning that they are no longer open to new ideas.

Nicco Mele
echoditto president
A small minority can always manipulate. Technology is relatively irrelevant. It’s creating new ways to do old things; there’s nothing inherently good or bad about it. It’s all about the intention you bring.

Joe Trippi
dean 2004 campaign manager
Fundamentally, it totally levels the playing field. In the end, the Net and all of us being able to connect with each other will make campaign-finance reform obsolete. We are campaign-finance reform, all of us. If 5 million Americans decided tomorrow morning to give $100 to a candidate—that’s half a billion dollars. There would be no reason for that candidate to talk to an oil company, an energy company, a health care company ever again.

Michael Cornfield
democracy online project
The displays we’ve seen of the revolutionary potential of online politicking have been lightning in a bottle. You might defeat a lobbyist with a very effective online grassroots campaign, but the lobbyist and the industry are going to be back tomorrow.

David All
gop tech consultant
I’m predicting that Time‘s person of the year is going to be “us.” It’s no longer going to be “you”—the idea that it is one person. It’s going to be the group that is changing the world.