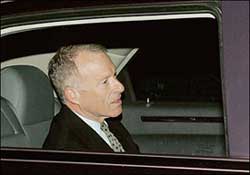 They described him as a devoted father and family man who wouldn’t hesitate to interrupt a meeting, even one pertaining to pressing national security matters, to field a phone call from one of his children. Quiet and self-effacing, friends and former colleagues say, he prefers jeans to suits and, despite the rigors of his high-profile job, always made time to console a co-worker or counsel a friend. They recalled him as an intellectual and truth-seeker, not an ideologue. Above all, the person they knew was a man of honesty and integrity. To them, this made it all the more shocking when in March, after a seven week trial, I. Lewis “Scooter” Libby was convicted of obstruction of justice and perjury, charges stemming from his role in blowing Valerie Plame Wilson’s CIA cover.

Standing in Judge Reggie Walton’s courtroom today, before receiving his sentence, the vice president’s former chief of staff addressed the court briefly. “It is, respectfully, my hope that the court will consider, along with the jury verdict, my whole life.” This, too, was the hope of Libby’s supporters, many of whom wrote to Walton seeking leniency for their friend and colleague. Remarking that Libby “took a course that seems to be contrary to everything he’s done in his life,” Walton sentenced him to 30 months in prison and a $250,000 fine.

Among those asking Walton to go easy on Libby were a diverse cast of characters from his past, everyone from prep school and college classmates to one-time colleagues at the White House and the Pentagon to Libby’s former secretary at the law firm Dickstein Shapiro. Even Air Force Two’s head flight attendant, Ronnie Bell, weighed in, writing, “Even though Scooter has been convicted in Federal Court, I do not believe that this is an accurate image of Scooter’s character and integrity.”

Also requesting leniency for Libby were a slew of high-profile officials, both current and former, including the vice president’s national security adviser, John Hannah; Joint Chiefs chairman Peter Pace; and former Secretary of Defense Donald Rumsfeld. For his part, Rumsfeld called Libby “a patriot, a dedicated public servant, a strong family man, and a tireless, honorable, selfless human being.”

Former Secretary of State Henry Kissinger, who, like Libby, played a controversial role in shaping U.S. foreign policy, described Libby as “a man of strong views, some of which I don’t share.” That said, he wrote, “I would never have associated the actions for which he was convicted with his character. Nor do I believe that they will ever be repeated. Having served in the White House and under pressure, I have seen how difficult it sometimes is to recall precisely a particular series of events. This does not justify the actions, but it may help you consider mitigating circumstances.”

Calling Libby an “extraordinary role model for integrity and humility,” Republican strategist Mary Matalin, who served as an adviser in the Bush administration, wrote of Libby’s special bond with children. “One of my many enduring and endearing memories of Scooter is of his universal love of families,” she wrote. “One of our early ‘undisclosed location’ work trips (which were always driven by unfolding threatening events and were therefore unscheduled and unanticipated by our families and us), coincided with Halloween…. The Cheney grandchildren were required to accompany us on this particular trip, yanked out of school and away from their much-anticipated night of Trick-or-Treating. Their disappointment at being trapped in the desolate, nothing-to-do locations was heartbreaking.” Libby, she recalled, “flew into action, finding treats, creating costumes, and arranged an ad hoc Trick-or-Treat and Halloween games for the kids.”

While his supporters strove to portray him as a doting father and husband, a man of unusual compassion and conviction, and a committed public servant—and there is no reason to doubt he is all of those things—another side of Libby emerged at his trial, one that is entirely at odds with the model of integrity those who know him insist he is.

Backed by an abundance of evidence and testimony, the prosecution, led by Patrick Fitzgerald, portrayed Libby as a loyal foot soldier of the vice president, who, at Cheney’s direction, sought to discredit an administration critic, going so far as to blow his wife’s cover in the process. Based on the facts presented at the trial, a jury determined that Libby lied to a grand jury and federal investigators (possibly to shield the vice president from being implicated in the scandal), spinning a convoluted tale of how he first learned of Valerie Wilson’s identity. It is this side of Libby that he will most likely be remembered for.

Scattered among the Libby-touting letters [PDF] from Washington powerbrokers and neocon luminaries (Doug Feith, Richard Perle, and Francis Fukuyama, among them), were also notes from ordinary citizens, some scrawled in messy longhand, demanding that Libby receive the maximum penalty. One letter-writer, describing herself as “a common U.S. citizen in Nevada,” noted: “Anything less than the maximum sentence for I. Lewis ‘Scooter’ Libby would send a message to the world that public servants in this country are not (seriously) held to high, or even lawful, standards.” She continued, “Such a message would serve to encourage public servants—from the highest office at the federal level, down to the lowest position at [the] local level—to disregard the laws of the land. That is not a message that any public servant should hear.” It would seem that Judge Walton got the message.