I posted a link to a new Jose González track last Monday at the top of my Top Ten, and now a video is making the internet rounds for another new song, “Down the Line.”

The video, directed by Andreas Nillson, is apparently part of this “sins” theme González has described as providing fodder for the upcoming album, In Our Nature, and Nillson’s video makes the connection sort of explicit. In it, a pig-man creation does a lot of (mostly) humdrum things; I guess we’re all pigs, is the point? The porcine fellow was, it turns out, inspired by Manhog, a far more compelling comic creation of Seattle artist Jim Woodring. 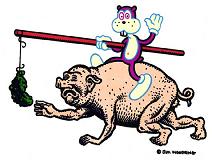 Woodring’s work hurts my head, but I can’t look away. While Manhog’s unlucky adventures in his surreal world are noteworthy, he’s not even the most affecting aspect of these stories, of which the word “comics” seems unworthy. Souls become visible, toaster-shaped pets save your life, and the universe is a terrifying, beautiful riot of life and color, all seen through the innocent eyes of Frank, a Sylvester-like cat seemingly brought in from some other comic strip. The wordless panels are often funny, but more often deeply disturbing, so I hesitate to recommend them without a caveat—maybe have a close friend nearby the first time you open one of his books?

Check out Woodring’s blog here, and don’t say I didn’t warn you.