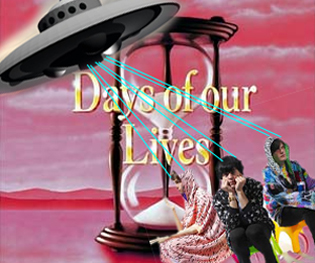 Timbaland is trying something new. The 35-year-old rapper-producer, who has collaborated on No. 1 songs for Justin Timberlake and Nelly Furtado, will appear on ABC’s “One Life to Live” on Oct. 9, the network said Wednesday. “This is a new experience for me, I am looking forward to having a great time and sharing my music!” he said in a statement. – AP

“It just seemed like a natural fit,” said Madonna in a statement. “By appearing on ‘Guiding Light,’ I hope to show America what a guiding light the Kabbalah has been for me.” The singer is one of many following Timbaland’s lead by appearing on daytime television, in what some are calling the most inspired cross-promotional concept since the Chicago Bears’ 1985 hit, “Super Bowl Shuffle.” Meg White plans to use her “down time” to join “The Young and the Restless” for an exciting seven-week subplot about anxiety disorders, and look for UK sensations Klaxons to ride their post-Mercury Prize publicity wave to a guest appearance on “Days of Our Lives,” where the band will play a trio of adorable space aliens who come to Earth and discover that Earth women may be more than they bargained for.

“As the World Turns” attracted Ricky Martin, although he maintained the show’s groundbreaking gay love story had “nothing to do with it.” “Any hot three-ways I engage in with the two actors will just be, you know, acting,” said the Latin heartthrob in a statement.

Intriguingly, the members of legendary UK combo The Smiths plan to take over an entire season of Dr. Phil, where the notoriously ornery psychologist will try to get to the root of the band’s “issues” over the course of 70 heart-rending episodes. “Honestly, I think we just need to ‘get real,'” said lead singer Morrissey in a statement, “and if we’re ever going to reunite as a band, we’ll have to ‘shape up.’ Plus I really think Dr. Phil can help me lose these last 5 pounds.”