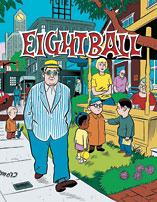 A Connecticut teacher has been forced to resign after he gave a copy of Dan Clowes’ “Eightball #22” to a 14-year-old female freshman student. The English teacher gave the student the comic book as part of a “make-up” assignment and not as part of regular curriculum. The comic contains mature subject matter, for sure: references to rape, various sex acts and murder, and a naked woman. That is, a drawing of a naked woman. While the feelings of the student about the situation are not explained, the parents are letting everybody know how they feel:

The girl’s father, who asked that his family remain anonymous because it has already been the target of criticism, described the graphic novel that English teacher Nate Fisher gave the student as “borderline pornography… it’s not even like a gray area,” the father said. “It’s clearly over the line.”

“I personally don’t ever want him teaching again,” he said. “There is nothing that he could say that would account for this. … That poor judgment is something you can’t take back.”

Apparently the student has now been the target of ridicule (and perhaps even threats) because the teacher was quite popular, which is pretty easy to understand, considering he assigned a super-cool comic book as make-up reading.

Why is it that this kind of overreaction or censorship always seems to happen in the most ironic way possible, to the works of art that are actually the least harmful in the ways they’re being accused of? The “Eightball” subplots that eventually became the acclaimed graphic novel (and film) Ghost World are told from the point of view of young women, and not only are they complex and heartfelt, they’re also empowering in the best sense of that overused word. They bring up the tribulations of young womanhood without condescension or whitewashing, and when I read them, my first thought was “my little sisters need to read this.” I think they can handle a drawing of a boob. At this point I guess it shouldn’t be surprising that nuanced, honest work raises hackles while truly moronic, pornographic pablum seeps into children’s brains from TV or advertising without protest. But just once, couldn’t backwards, hypocritical parents like these get somebody at MTV fired for “The Hills” instead?