Inspect your gadgets: “I think it’ll take at least 12 to 18 months to do this. Getting out of Iraq is not the issue; getting out of the theater of operation is. You can drive out of Iraq and nobody’s going to inspect you or anything. But once you get in Kuwait, every piece of equipment, every container, every generator has to be scrubbed and washed and inspected by the Agriculture Department so that we do not bring any hidden diseases back to the United States. Desert sand becomes hardened mud like cement. And all that’s got to be sprayed down or they won’t allow it on ships to get it home.” —Lt. General William Pagonis, Gulf War logistics chief

Ammo dump: “It’s not rocket science, but it is fundamental devil-in-the-details kind of planning. Any wheeled vehicle is subject to being left. But if it is a complicated piece of equipment, it makes no sense to leave it. And we would take our ammunition with us—I would not leave that stuff there.” —Maj. General Paul Eaton, head of training for Iraqi security forces 2003-2004

Under fire: “If the Pentagon had its way, it would be a very staged, orderly thing. Now if for some reason the Iraqis or Congress said, ‘You have to get out right away,’ logistics would be the least of our concerns. It certainly wouldn’t look like [the frantic 1940 British evacuation of] Dunkirk. But I’m not saying there won’t be casualties.” —Colonel Gary Anderson (USMC, retired), Pentagon consultant

Retreat with honor: “The people who are saying we can only pull out a brigade a month are thinking in terms of an orderly withdrawal where we try to preserve the sense that we are not being driven out. They don’t want it to look like an outright tactical retreat. They want it to be a more managed process where we preserve our own safety and honor.” —Michael O’Hanlon, Brookings Institution

Traffic jam: “The number one priority has to be the protection of the force as it leaves, because it will undoubtedly be under attack. A pullout would consist of collapsing from the outside fringes of the country into Baghdad and then moving south to Kuwait. Just to secure a route that will have that much traffic on it is going to be challenging.” —Colonel Douglas Macgregor (retired), military analyst

Bridge on the river tigris: “Earlier this year, there were a couple of high-profile demolitions of bridges by the insurgents. There are only something like 13 bridges in Baghdad. If they were blown, that would funnel American forces into a small number of bottlenecks that could be targeted. That is one theory of why the bridges were being blown up—just to practice.” —Colin Kahl, Center for a New American Security

Profits of war: “A military withdrawal of more than a hundred thousand troops is no simple matter, particularly under fire. Most members of Congress recognize that you just cannot, logistically, remove 160,000 troops and enormous amounts of matériel in any kind of good order in anything less than a matter of months. I hope we don’t just bug out without a plan, leave all the heavy equipment behind or blow it all up, and then spend $100 billion repurchasing all of it, which is what the military contractors would love for us to do.” —Senior congressional staffer

Secret plans: “We have to plan to leave more carefully than we planned to enter. People thinking about this issue, whether they be inside the Pentagon or associated with Petraeus’ command in Iraq, are not allowed to talk to each other. All of their efforts are basically secret and sealed off from one another. It’s such a political hot potato. Once it looks like we’re doing contingency plans for withdrawal, it’s seen as politically problematic. But I will say the think tanks aren’t the place where military planning should be done.” —Colin Kahl, Center for a New American Security 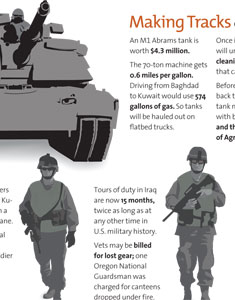 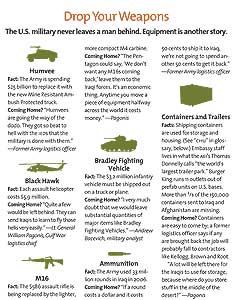