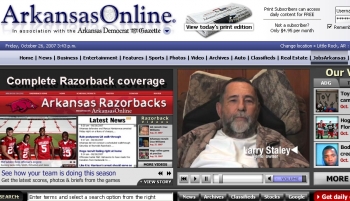 It’s the kind of hyper-local story that’s always been the bread and butter of mid-sized papers like the Arkansas Democrat-Gazette: A homeowner in suburban Sherwood confronts a man trying to steal a four-wheeler from his residence, fires pistol shots into the dark and, two days later, the would-be thief is found dead in a nearby ditch.

That story, to me, screams out for a few dozen column inches of cold, smudgy newsprint. Which is why it feels so odd that the website of the Little Rock-based Dem-Gaz now features a professionally-edited video report on the Sherwood incident, with swooshing digital graphics and a spiffy “Arkansas Online” intro sequence. There’s something incongruous about watching an old-time Arkansan (or, as the really old-timers prefer, Arkansawyer) in a camo shirt talking about “firing five times into the top of these pine trees and … [emptying] the rest of the magazine of the gun into the creek bank” on a web-only clip with such high production values. Maybe that’s because, amid the chatter about newspapers’ new media imperative and the flash that goes with it, we forget that local stories are often, well, unexceptional.

I can say it’s definitely a milestone that the rock-solid D-G (disclosure: I once worked there), whose owners are notoriously stuck in their ways, has finally embraced online journalism. The paper’s homepage, released earlier this year, is flashy and content-heavy and looks great. New media has officially arrived in Arkansas. Whether the model is sustainable hinges on two issues: Is this really how folks want to get their local news? And will the extra videographers and web designers prove financially feasible?