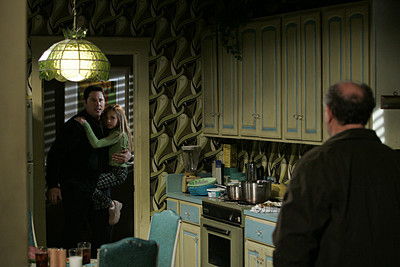 It’s been a rough couple weeks for the “little X-Men that could,” as NBC’s breakout hit from last season seemed to wilt under the pressure of being, well, NBC’s only breakout hit from last season. The first episodes so far this season have been both confusing and kind of dull, with our heroes scattered around the world (and throughout time), one of them even affected with amnesia in, well, a place people are often affected with amnesia, actually: a bar in Ireland. I’d come close to giving up on the show, to be honest, but a scene two weeks ago hinted at intriguing directions to come: a new villain, Maury, the father of Matt the mind-reading policeman, emerged with the ability to trap you in a literal nightmare, oblivious to the outside world. The two nightmare scenes had a minimal beauty and elemental terror, hinting at how the show has often achieved surprising, unique moments.

This week, the tangled plot lines seemed to finally come into focus, and suddenly, in retrospect, the long buildup seems like an envelope-pushing experiment rather than aimless wandering. The show was at its best last season when it hinted at the apocalyptic future that might have been (if the heroes hadn’t done their job right); last night’s episode finally revealed this season’s “what if,” a threat even scarier than that New York bomb: a virus (“Shanti”) that will apparently kill “93%” of the world’s population. The scenes of an abandoned New York City, refugees marching through a containment center, echoed last year’s great Children of Men, again showing how Heroes often aims way above typical TV.

Nightmare guy showed up again too, giving Matt a chance to shine in a great scene that was weighty with symbolism: father and son both attempting to trap each other permanently in a nightmare comprised of their apartment on the day dad abandoned his family. Ulp. Think of all the money you’d save on therapy if you could do that!

Non-mutant non-superhero researcher Suresh has always been a kind of annoying character, almost willfully blinded by his search for scientific truth, colluding with baddies as if he could stay above it all. This episode, he finally admitted as much, in a refreshing bit of honesty that also felt a little like giving the viewers a voice (as the show’s sometime narrator): he reveals to the Company that he’s been working against them, and that he’s not sure who’s right and who’s wrong any more. Tell me about it! Self-healing cheerleader Claire’s dad was such a creepy baddie for so long last season it was really tough to adjust to him being a daughter-protecting, family-loving good guy; but last night, he too seemed to reemerge as a compromised character.

Next week, the previews promised, our questions will be answered, and thank Shanti for that. Has (apparently immortal) Brit baddie Adam really been harboring his grudge against Hiro for, like, a thousand years? How did Peter survive the supposedly involuntary blowing-up in the sky at the end of last season? And can we have some more naked hose-down shots of Peter, by the way? Speaking of gayitude, that’s one area the show continues to disappoint: like Star Trek, its plot seems designed for maximum diversity, with characters of every conceivable ethnic background, and multiple mixed-race romantic couples. The whole point is the heroes are everybody, the heroes are us. Like usual, though, apparently no homos can be heroes, or even friends with heroes. In a show that does so much right, it’s an inexcusable oversight. Plus how awesome would it be if one of the Petrellis was queer?