8:13 – Nancy Pelosi takes the stage, which is in the shape of a square and surrounded on all sides. Pelosi, like all speakers today, will have to speak while walking in a circle.

8:14 – Pelosi says “all the eyes of the world are on this dinner tonight.” The disproportionate amount of power that Iowa has in American presidential elections really is ridiculous.

8:15 – Peeking at Marc Ambinder’s blog, I see John McCain had a kind of insane day today, filled with bucketloads of attack politics.

8:20 – The Hillary Clinton supporters here are wearing shirts that read, “TURN UP THE HEAT. TURN AMERICA AROUND.” New slogan?

More after the jump, including the Edwards speech.

8:25 – Pelosi is introducing the lieutenant governor of Iowa. Time to check in on the USC-Cal game on ESPN.com.

8:34 – Iowa Governor Chet Culver is speaking. I’m skipping some stuff. Some of this is too boring even for a Mother Jones liveblog. Try CSPAN.

8:39 – Ann Friedman answers an interesting question over at TAPPED. Who has the whitest campaign staff? 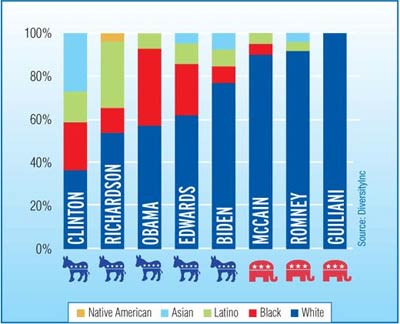 So there you have it: Giuliani has an all-white campaign staff. He also has an all-goombah security staff. I’ve seen it myself. That’s not a comment on Italians. It’s a comment on guys who look like they are straight out of the Sopranos.

8:48 – Here comes Edwards. “We believe in the promise of America, for every single American,” he says. People go nuts. This is an easy crowd right now — they’ve been waiting two hours for the presidentials to start speaking. Obama goes last. He might have a very tired group on his hands.

8:51 – Edwards, for the record, isn’t saying anything new right now. You can see my web piece on Edwards from earlier this week for a pretty good summary of his current message.

8:53 – “It is not enough” to change parties, says Edwards. “We need to change this system.” He tells a story of a man who was unable to speak for 50 years because he didn’t have the health insurance he needed for a simple surgery on his cleft pallet. “We are better than this!” says Edwards.

9:00 – Edwards says “the cause of my life… is speaking for the voiceless in this country.” He is going over how, as a trial lawyer, he fought powerful interests on behalf of ordinary Americans and won. This makes him uniquely suited, he argues, to fight the interests that corrupt Washington.