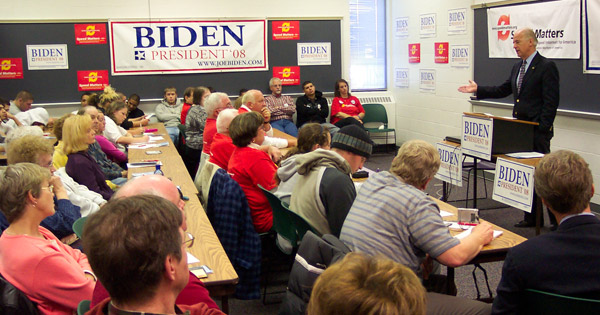 Following Joe Biden on the campaign trail earlier today, I heard him address the issues of education and high-speed internet access at the Iowa Valley Continuing Education Conference Center in Marshalltown, Iowa. Biden drifted off and on prepared remarks, shifting from his written notes to paragraphs of memorized stump speech to long, off-the-cuff monologues. The result was a speech that fluctuated pretty wildly in volume and energy. In all, though, Biden had an excellent command of the facts and was able to draw on years of experience in the senate (the man was elected at 29 and is now 65) to illustrate his points. I’m going to write more about him, likely tomorrow, but for now, I want to point out something fun.

Joe Biden really loves facts and figures. I was stunned at the quantity of numbers he could pack into a paragraph. Here are two examples. Remember, these are verbatim quotes.

“By 2015, China is going to have twice the number of college graduates as the United States and Europe combined. In 2004, China graduated 350,000 engineers, computer scientists, and information technologists with four-year degrees, while we graduated 140,000. One out of five scientists and engineers in the United States are foreign born. We rank in the top five in the proportion of young people who attend college, but we rank 16th in the proportion of young people who graduate from college.”

I count ten numbers in that paragraph. In the next one, Biden gets even more intense by doing some quick mental mathematics.

Twenty-one numbers. In a passage that is 190 words. That’s one number every 9.05 words. Now Biden’s got me doing it.

For more on the actual content of Biden’s comments, see the “Online Nation” portion of his website.