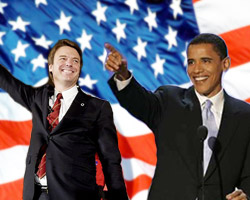 Last week in Bettendorf, Iowa, Senator Barack Obama neatly summarized his message to voters in a speech titled “Reclaiming the American Dream.” Americans, he said, can’t expect to “reclaim that dream unless we put an end to the politics of polarization and division that is holding this country back; unless we stand up to the corporate lobbyists that have stood in the way of progress; unless we have leadership that doesn’t just tell people what they want to hear, but tells everyone what they need to know.”

If the message sounds familiar, that’s because John Edwards has been trying for months to sway voters in Iowa with a similar pitch—his promise to fix a system “broken” and “rigged” by lobbyists and his insistence on candor are the essential ingredients in his campaign. The similarities between Edwards and Obama suggest that the two men are splitting supporters that could potentially coalesce behind one of them, and such a realignment may have to occur for either of the two to beat Hillary Clinton for the nomination.

As it stands, Obama and Edwards have nearly identical positions on the issues. Like the rest of the Democratic field, they support ending the war, fighting global warming, and creating universal health care. They both want stronger border enforcement paired with a path to citizenship for illegal immigrants already in the country. They both support an overhaul of No Child Left Behind and expanded college accessibility. They both advocate economic policies that aid the middle class.

They both champion straight talk. When Senator Clinton did some delicate verbal ballet at a recent debate in order to avoid taking a position on a tricky immigration issue, Edwards said, “America is looking for a president who will say the same thing, who will be consistent, who will be straight with them.” Obama immediately followed by saying, “Part of leadership is not just looking backwards and seeing what’s popular, or trying to gauge popular sentiment.”

And they both blame special interests and lobbyists for corrupting the political system. They are so like-minded on this issue, that they occasionally use the same language. Obama recently told Iowans, “Every four years politicians come before you and talk about health care. And then you see the same results.” Edwards said almost the exact same thing a few days earlier. Edwards’ explanation why: “Drug companies, insurance companies, and their lobbyists.” Obama has the same answer.

Admittedly, the candidates have their differences. Edwards has a more aggressive campaigning style and is more willing to attack the Democratic frontrunner, Hillary Clinton. Obama has attacked weakly when he has attacked at all, and recently said that sharp-elbowed politics may just not be in his nature.

And then there is the one big difference in their messages. Obama emphasizes that the key to changing the status quo in Washington is ending divisiveness and partisanship. In the 2004 convention speech that put him on the political map, Obama delivered now famous lines about how there are no “red states and blue states,” just “the United States of America.” He’s been running on that message ever since, using the same rhetoric in a speech in Iowa this past Saturday.

But Edwards doesn’t buy it. “I’ve heard him talk about compromise, negotiation, bringing people together,” Edwards said of Obama last week. “I believe there’s a fight in front of us…. I don’t think we can all sit around a table and be nice to [special interests and lobbyists] and think they’re going to relinquish the power and influence they have today. I think it has to be taken from them. And that means you’ve got to have somebody that will fight.”

Even so, during that same campaign appearance, Edwards seemed to acknowledge his similarities with Obama, saying, “The differences between Senator Clinton and myself are much more dramatic than the differences between Senator Obama and myself.” Edwards went on to praise Obama for joining him in refusing campaign contributions from political action committees and lobbyists.

With all their similarities, the presence of both candidates in the race probably prevents either of them from gaining ground on Clinton. Both campaigns acknowledge that their hopes rest on Iowa, where the three frontrunners are running roughly neck and neck and neck. With the former First Lady commanding a massive lead in nationwide polls and substantial leads in many of the other early primary states, if either Obama or Edwards places third in both Iowa and New Hampshire he will likely have to pull out before the February 5 super primary. Should that happen, the man still standing could potentially see a boost in the polls as voters re-align their allegiances.

For most voters, shifting from Edwards to Obama (or vice versa) would not be difficult. Supporters of Obama obviously don’t mind that their candidate has only a few years in the Senate. Same with Edwards’ supporters, who are willing to overlook Edwards’ relative inexperience on foreign policy matters. Same with Obama supporters. And both candidates are charming, energetic, relatively young, and male.

It’s certainly not a given that all of Obama’s or Edwards’ fans would flock to the other if their man were to withdraw from the race. But it is a fact of the Democratic race that among the leaders there is only one conventional candidate (who doesn’t attack the system) and two unconventional candidates (who do). For Democrats yearning for a president who will take on Washington, the math is clear: Two reformists in the race are worse than one.