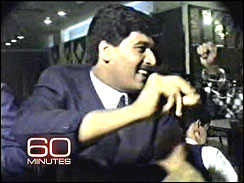 From the looks of this press release not much. Here’s the news they’re claiming to break:

Curve Ball is an Iraqi defector named Rafid Ahmed Alwan, who arrived at a German refugee center in 1999. To bolster his asylum case and increase his importance, he told officials he was a star chemical engineer who had been in charge of a facility at Djerf al Nadaf that was making mobile biological weapons. 60 Minutes has learned that Alwan’s university records indicate he did study chemical engineering but earned nearly all low marks, mostly 50s. Simon’s investigation also uncovered an arrest warrant for theft from the Babel television production company in Baghdad where he once worked.

Ok, his name is new. And that’s big. But him being a liar, and a thief (and also, a sex offender) and a whole bunch of other things 60 Minutes is claiming to have uncovered have in actuality been known for years. You can read all about the Curve Ball saga in our Iraq War Timeline. And much of the original reporting on Curve Ball was done by the LA Times. And former CIA official Tyler Drumheller, the apparent big source for 60 Minutes, has been speaking out for years.

Which is not to say that Bob Simon’s two year investigation won’t yield some great new stuff. I’m sure it will. But I just wish they’d give credit to the LAT and others who broke or championed the Curve Ball story back before it was fashionable to call out the Bush administration.