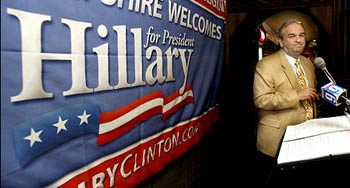 Earlier today Billy Shaheen, Hillary Clinton’s New Hampshire co-chair and husband of former N.H. governor Jeanne Shaheen, was thinking out loud about electability. He made these comments about Barack Obama, who just climbed into a tie with Clinton in N.H. in a CNN poll that had Obama down 20 points in September:

“The Republicans are not going to give up without a fight … and one of the things they’re certainly going to jump on is [Obama’s] drug use.”

Okay, fair enough. In making the case that his candidate is more electable, it is reasonable for Shaheen to point out that Obama has spoken openly about using marijuana and cocaine in his early years. That is something the GOP will likely jump on, after all. Shaheen continued:

“It’ll be, ‘When was the last time? Did you ever give drugs to anyone? Did you sell them to anyone?’… There are so many openings for Republican dirty tricks. It’s hard to overcome.”

Hey now! That’s some strong stuff! Just because Shaheen wrapped his comments in a blanket of sympathy (or supposed sympathy) doesn’t hide the fact that he just raised, for the first time in the campaign, the possibility that Barack Obama was a drug dealer.

And this is probably so obvious I don’t need to say it, but I will. Any comment along these lines is racially coded. No one—no one—would ask if Mitt Romney slung rock if he were to admit he did drugs as a kid. Same with John Edwards or Hillary Clinton. But for many Americans the young Obama, who went to Columbia and Harvard Law, fits into their mental picture of what a drug dealer looks like.

Shame on Shaheen. I really hope this wasn’t coordinated within the Clinton campaign. Right now they’re saying, “These comments were not authorized or condoned by the campaign in any way.”

Obama’s response, after the jump.

Update: Obama camp’s response: “Senator Clinton’s campaign is recycling old news that Barack Obama has been candid about in a book he wrote years ago, and he’s talked about the lessons he’s learned from these mistakes with young people all across the country. He plans on winning this campaign by focusing on the issues that actually matter to the American people.” Should it be troubling that that’s a non-denial denial? I know that answering directly would entail lowering Obama to the level of the accusation, but it would have been nice for everyone to be completely clear.