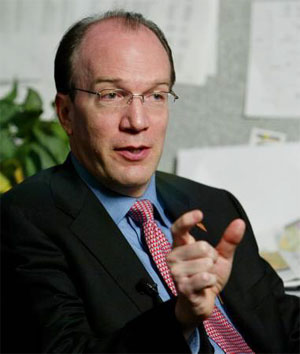 This morning’s Washington Post includes a front page story detailing alleged mismanagement and questionable expenditures by the Office of the Special Inspector General for Iraq Reconstruction (SIGIR), headed by Stuart W. Bowen, Jr., a former Bush adviser who has earned equal praise from Democrats and Republicans alike for his dogged approach to uncovering… well, mismanagement and questionable expenditures in the Iraq reconstruction.

According to the Post, Bowen’s office is the target of at least three ongoing investigations, by the House Oversight and Government Reform Committee, the Presidential Council on Integrity and Efficiency, and the U.S. Army’s Equal Employment Opportunity Office. Echoing State Department Inspector General Howard “Cookie” Krongard’s recent troubles, all three are said to have resulted from complaints brought by members of Bowen’s own staff. Among the charges: that due to abuse of federal overtime policies, at least 10 staff members netted more than $250,000 last year (General Petraeus pulled down $174,900, by comparison); that Bowen’s pursuit of a $3.5 million book project about the Iraq reconstruction became a financial sink hole; and that Bowen and his deputies reviewed employee emails without permission, allegedly to identify “who was loyal and who was not,” according to one aggrieved staffer. Compounding the misery at SIGIR—which according to another employee quoted by the Post, is “gripped by paranoia” and has taken on “a siege mentality”—is the revelation earlier this year that the office’s claim to have saved taxpayers $1.87 billion in reconstruction spending was not only untrue, but way, way off the mark: a new estimate last summer put the figure at just $95 million, or five percent of SIGIR’s original claim.

Despite all this, the SIGIR model stands to be expanded in the latest version of the 2008 Defense Authorization Bill, which was passed by the House earlier this week and is now awaiting Senate approval before making its way to President Bush’s desk. It would create a Special Inspector General for Afghanistan Reconstruction (SIGAR) to “conduct, supervise and coordinate audits and investigations of the treatment, handling and expenditures of appropriated funds by the United States government, and of the programs, operations and contracts carried out utilizing such funds in Afghanistan in order to prevent and detect waste, fraud and abuse,” according to the bill.

SIGAR would receive an initial operating budget of $20 million for fiscal year 2008. Short of congressional reauthorization, its duties would be scheduled to conclude on September 30, 2010. Once up and running, the office would produce quarterly and semi-annual reports detailing its activities and accomplishments in reducing waste and fraud in Afghanistan.

Although we may not hear as much about it as we do about Iraq, waste in Afghanistan is real and could be undermining the overall U.S./NATO mission there. The U.S. government has already invested some $20 billion in the country since 2001. And, according to critics, it’s contractors, not Afghans, who have benefited more. As Sarah Chayes, a former NPR reporter in Afghanistan and author of “The Punishment of Virtue: Inside Afghanistan After the Taliban,” said in a recent interview with Fresh Air‘s Terri Gross, projects supervised by agencies like USAID are often unnecessarily large and involve far greater numbers of highly paid contractors than necessary. “It costs a fortune, and Afghans see it,” she says. “They understand that that was money that was earmarked for Afghanistan, and they see it going back into the pockets of the contractors.”

Although SIGAR might help reduce some of this waste, the Pentagon has opposed its creation from the very beginning. The department claims it “does not have a reconstruction role in Afghanistan” similar to the one ongoing in Iraq, and suggests that launching a new oversight office will only add further strain to an already over-burdened staff at DOD’s inspector general’s office, which must compete with other departmental IGs for trained staff willing to travel to Iraq. Such complaints did not sway lawmakers.

By the way, SIGAR is not the only innovation in this year’s defense authorization bill targeting government contractors. The bill would also establish an independent, bipartisan Commission on Wartime Contracting to focus on Iraq and Afghanistan, which would expand the reach of SIGIR and SIGAR beyond mere reconstruction contracts and for the first time grant them authority to investigate security-related contracts, as well. In addition, the Commission will undertake an investigation into the overall impact of using civilian contractors in war zones.

And if that’s not enough for firms like Blackwater, Triple Canopy, and DynCorps to worry about, this year’s defense authorization also demands that the Pentagon tighten its policies specifically with regard to security contractors, requiring that it maintain records on individual private security personnel, register and clearly identify contractor vehicles in conflict areas, and brief contractors on U.S., Iraqi, and international laws governing the use of force.

So, after more than four years of war, might we finally be seeing the beginnings of the first serious effort to rein in the private security industry’s free-for-all in Iraq? Obviously, it’s too early to know, but the signs are pointing in the right direction for once. Thanks, Blackwater…