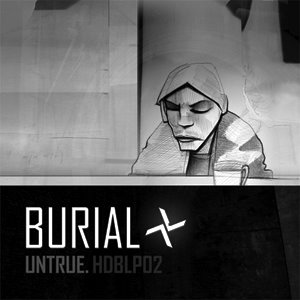 A few weeks ago I posted about Metacritic’s tally of the best reviewed records of the year, and how a surprise candidate, The Field, had snuck up to #1. Well, there’s a new #1 on their tally this week, and it’s another left-field candidate: UK dubstep wizard Burial, beating the Field by one point and Radiohead by three points. Sure, the album just came out, so its critical average is based on far fewer reviews, but still, that’s a bit of a shocker for an album that hasn’t topped any individual lists I’ve seen so far. So what’s it all about?

Dubstep is a wonky offshoot of two-step, a strange and wonderful microgenre of dance music that had a brief dominance of UK dance floors and pirate radio stations in the late 90s and early Oughts. Two-step is characterized by a severely syncopated bass drum, throbbing, walking basslines, and a skittering snare drum, typically overlaid with a traditional soul vocal track, so the music ends up being a strange confluence of drum ‘n’ bass intensity with R&B richness. Dubstep, as its name indicates, both ratchets down the pop trend of two-step and touches base with reggae, allowing half-time rhythms to emerge and the vocals to exist only as echo-y, repetitive samples.

It’s also a hell of a lot darker, and Untrue is one bleak album. It’s split between tracks with a drum beat and tracks without, and while the tracks with drums utilize the skittery rhythms of two-step, it’s hard to see anyone dancing to them: the bass is so sludgy, so overlaid with gargantuan reverb and crackly effects, it’s much more suitable for headphones. Moreover, the vocals that float in and out are mere disconnected phrases, making them all the more devastating: “because you lied…” repeats the title track, and “Archangel” keeps asking, “tell me I belong.” These songs have a dark majesty that’s not matched by the drumless, ambient tracks; those seem a little aimless and generic.

Untrue throws into sharp relief the unfair opposition set up recently in the New Yorker by Sasha Frere-Jones, who gives both white and black music too little credit in assigning them their signifiers. Burial, whoever he is, has managed to stir up so many influences, like R. Kelly in an Aphex Twin blender, that it’s hard to tell what’s what; moreover, its lyrical focus on the abject misery of a broken heart could not be more universal. It may not be record of the year, but it sure is something.