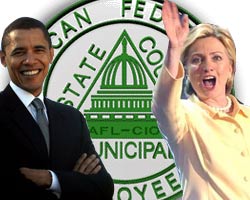 Last April, Gerald McEntee, the international president of the American Federation of State, County, and Municipal Employees (AFSCME), took a seat in a congressional committee room and testified before a House subcommittee on the pressing need for health care reform. Noting the growing number of uninsured and soaring health care costs, he declared, “America’s working families demand relief from this crisis.” He laid out his principles for the universal health care coverage that his powerful union favored. He also made clear what his union opposed when it came to health care reform, most notably so-called individual mandates. McEntee explained,

The Massachusetts reform model attempts to achieve near-universal coverage through the use of individual mandates that require those without access to coverage through their jobs to buy coverage in the individual market. Although there are subsidies to help low-income families, many working families will be forced to pay much higher prices for coverage. The most recent estimates for coverage under this initiative for a family with an income of $50,000 would include a $7,000 premium and a $2,000 deductible. Health care costs that approach 20 percent of total family income are unaffordable and unacceptable to working families and they will ultimately doom this plan to failure.

This opposition to mandates is standard fare for AFSCME. In August 2006, at its annual convention, the union adopted a “Health Care Reform Blueprint for 2007-2008” that called individual mandates “incompatible with AFSCME’s principles and long term interests.”

But policy principles gave way to political needs. In late October, AFSCME endorsed Hillary Clinton, whose health care plan prominently features a mandate. This week, AFSCME helped Clinton assail her primary rival, Barack Obama, for holding a position it holds itself. AFSCME’s national office distributed a flier in Iowa blasting Barack Obama for not mandating coverage, saying Obama took “the timid way out, offering yet another band-aid solution.” (In underhanded fashion, the attack flier was designed to look like it came from the John Edwards campaign, not the Clinton camp.)

The mandate issue has become one of the few matters of policy debate in the Democratic race. Obama, Clinton, and Edwards have all released plans that they claim would provide universal health care coverage. The proposals put out by Clinton and Edwards each contain a mandate, which would force healthy individuals to buy insurance in order to put more money into the system to cover the sick. Obama’s plan does not include such a proposal. In one recent debate, Clinton attacked Obama for eschewing a mandate: “He talks a lot about stepping up and taking responsibility and taking strong positions. But when it came time to step up and decide whether or not he would support universal health care coverage, he chose not to do that.” (The AFSCME flier echoes this criticism.) Obama replied, “The only difference between Senator Clinton’s health care plan and mine is that she thinks the problem for people without health care is that nobody has mandated—forced—them to get health care. That’s not what I’m seeing…What I see are people who would love to have health care. They desperately want it. But the problem is they can’t afford it.”

It is Obama’s statement from that debate that is most in synch with Gerald McEntee’s testimony to Congress from earlier this year. Is AFSCME playing politics with health care? We contacted the union’s press office to get an answer, and no one returned our call and email.