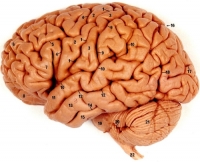 For the past few years, I’ve been posing a question to all my music-enthusiast friends: Why do we like music? And more specifically, why do we like the particular music that we do? “There’s no accounting for taste” simply doesn’t cut it for me. I’d like someone to explain to me exactly what accounts for musical taste. So far, though, no one’s been able to answer my question definitively.

All this has, however, led to some pretty interesting nature-vs.-nurture discussions. Most people I’ve asked are cheering for nurture. “My older brother was really into hardcore, and I ended up stealing all his mixtapes,” they’ll say. Or, “I liked this guy in high school who played in a punk band.” Even, “I used to dance around my living room to my parents’ Paul Simon tapes, so I’ve always had a soft spot for folk music.”

So it’s pretty clear that formative musical experiences influence our music preferences at least a little, but there’s some scientific evidence that there’s an organic component, too. Today, I came across an Innovation Canada interview with Daniel Levitin, a McGill University neuroscience professor who studies music’s effect on our brains. Now don’t get your hopes up: Levitin says that scientists have a long way to go before they’ll be able to answer the taste question. But what’s really interesting is Levitin’s unique research method:

IC: You emphasize using actual music — not abstract electronic sounds — in your studies. Is rap music by Busta Rhymes better than classical Bach for your research purposes?

DL: Part of the challenge in designing a rigorous experiment is ensuring that each subject has something equivalent. In the old way of thinking, you played everybody the same piece of music, but if you hate classical music and I make you sit for an hour and answer difficult questions about music while listening to Beethoven, I may not be getting meaningful answers out of the experiment. The newer way of thinking is that we need to be flexible about equivalence across subjects. That doesn’t mean a loss of rigour, it means that you might have an experiment where everyone brings in their own music and each subject serves as their own control. So, the experiment may steer more to [rapper] Ludacris than [virtuoso pianist/composer] Liszt depending on who your subject is.

So even if he can’t explain taste, Levitin is obviously acknowledging that it exists—and that it’s important. My challenge to Levitin: Find me a scientific explanation for the fact that anyone was ever into the Doors. Now that would be impressive.