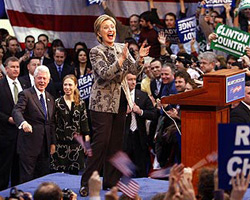 NASHUA, NH — The empire strikes back.

Throughout the morning, afternoon, and early evening of Election Day in New Hampshire, Hillary Clinton aides looked grim and gloomily moaned about a campaign that appeared to have been derailed, if not defeated. Expecting to lose by as much as 10 points, they wondered aloud what could be done to stop Barack Obama, the self-proclaimed “hope-monger,” who only days earlier had seemingly rewritten modern American politics. Then the actual results started coming in, and Clinton was reborn. After being trounced in Iowa, the wife of the “comeback kid” of 1992 had managed a resurrection far more impressive than her spouse had achieved sixteen years earlier. He had merely overcome news of an extramarital affair; she had beaten back a new brand of politics.

Her surprising win—based partly on a strong performance among women and working-class voters—came after she had spent days decrying Obama’s lack of experience (a legitimate point) and denouncing him as a hypocrite (not a legitimate point). With Clinton’s victory, the main question of the Democratic race returns to what it had been prior to Iowa: can he beat her? But the small 3-percent margin in her favor suggested that the battle between her conventional politics and his unconventional politics has not been definitively resolved.

Throughout the campaign, Obama and Clinton have been operating on two different levels. Her playbook has been by-the-numbers: bash the Bush administration, offer red-meat policy proposals, sell her experience, talents, and strength—and, of course, raise tons of money and assemble a powerhouse organization. Obama has done all of that but within a different context. At the start, he and his advisers took one big step back and tried to envision what the electorate would be yearning for in 2008—not just the Democrats but also independents and those Republicans who did not fancy the taste of the Bush-Cheney Kool-Aid.

Clinton was practicing standard supply-side politics: push the candidate. Obama was looking at the demand side. He and his aides believed there was a desire for a break from politics as usual. After all, there had been a decade and a half of bitter politics, as well as several years of governmental incompetence (and worse), care of the Bush administration. Opinion polls suggested deep popular dissatisfaction with the state and future of the country. The Iraq War—and its unending fallout—had soured many independents and some Republicans. And the current regime was not doing much for anyone worried about economic security, health care, or global warming. So for many Americans, the government wasn’t working, and the political system was broken. They wanted change. For a potential national candidate, what was the answer? A candidacy that offered solutions and leadership that would transcend the same-old/same-old. That was Obama’s theory: give ’em both a platform and, yes, hope.

In Iowa, it worked. Obama attracted newcomers to politics. He persuaded people that he had character, root principles, and the desire (if not the ability) to rise above the bickering of Washington to accomplish grand goals—that by electing him the voters themselves could be implementers of profound change. (A President Obama certainly would represent more change than a second President Clinton.) He offered them not merely a choice but the chance to be part of a cause.

In New Hampshire, his crusade crashed into prosaic political reality. Though the state—with its high percentage of upscale and well-educated voters—seemed ready-made for another Obama triumph, the Clintons had deep roots there (which was not the case in Iowa). And after being upset in Iowa, the Clinton campaign focused on its core supporters. “At Clinton headquarters, it was all women all the time,” said one Democratic official. And exit polls showed that women made up 57 percent of the Democratic vote and broke dramatically for Clinton.

At campaign stops, Obama audaciously compared his campaign to great periods in U.S. history: the fight for independence, the abolition of slavery, the defeat of fascism in World War II, the suffragette movement, the civil rights movement. “There’s a moment in the life of every generation,” Obama told the New Hampshire voters who flooded his events, “if it is to make a mark on history, when that spirit of hopefulness must come through…. This is our moment.”

Clinton aides and supporters dismissed and derided all his talk of hope and change as hokey. The day before the election, Bill Clinton called Obama’s pitch “the biggest fairy tale I’ve ever seen.” Again and again—in New Hampshire bars, restaurants and hotel lobbies, at campaign events—the Clintonistas voiced the mantra: Obama’s a fine young man, but she has the experience, she has been vetted. Their frustration was palpable: why don’t those damn voters get it. In the back room of an Irish pub in Manchester, retired General Wesley Clark said to me that he wished Democratic voters “would show some guts,” that he believed they were scared to vote for Clinton because they feared Republicans would mount a vicious anti-Hillary campaign should she be nominated. Democratic voters, he said, needed to suck it up and get behind Hillary Clinton, because she was the only candidate with deep experience. “Democrats,” he complained, “fall in love. Republicans fall in line.”

Working to get those Democrats into line behind her, Clinton asked voters to hire her as their champion, noting that due to her work in the White House, 7,000 kids in New Hampshire had health insurance and that New Hampshire National Guard members had health care thanks to her toils in the Senate. She held campaign events—not always so well attended—where she answered long series of questions to show her command of policy details. She cried—or nearly cried—at one campaign stop when discussing why she was driven to run for president. (Tons of analysis—before and after her win—focused on whether this had helped her.) And as Election Day neared, Clinton and her campaign ops went further than questioning Obama’s readiness; they denigrated him as a talker, not a doer, and, worse, as a disingenuous hypocrite. Their evidence for the second half of this argument was weak—more spin than substance. (For one example, see here.)

Reporters laughed off the Clinton oppo attacks, some telling me that the campaign had been peddling (unsuccessfully) the same thin stuff to reporters for months. There’s no telling—at this time—whether those cheap shots helped her. But they certainly didn’t hurt. And the hypocrisy of Clinton’s blasts never backfired against her. The Clinton campaign hammered Obama for slamming lobbyists but naming a (state) lobbyist for a drug company as co-chair his New Hampshire campaign. A fair point—but her campaign’s chief strategist is Mark Penn, a corporate consultant who has worked for drug companies and other favorite Democratic targets. The Clintonites did not allow themselves to be inconvenienced by such contradictions. And virtually no one called them on it.

In the meantime, the Clinton campaign’s get-out-the-gals ground game plodded ahead—even though on Election Day, Clinton people did not appear to have much faith in it. “This is not working,” Elizabeth Bagley, a Clinton adviser and fundraiser, said at mid-day. “There obviously has to be a retooling of the campaign.” And talk swirled that the Clinton campaign was about to undergo a dramatic shakeup. (“We’re always adding new people to the team,” a not-so-cheerful-looking Terry McAuliffe, the campaign chairman, told me.) The politerati pondered whether or not Clinton would pull out of Nevada, which holds a first-time caucus on January 19, and South Carolina, which has a primary election on January 26, and make her final stand on Super-Duper Tuesday, February 5, when 24 states will hold primaries or caucuses. “We need a time-out,” said a Clinton adviser, “something to stop the momentum, so we can have a reality check.” Clinton got much more than a stop-in-play.

With his lofty calls for change and his invitation to voters to join him in a grand political experiment, Obama, in Iowa, flipped the script. “We shook up every political assumption,” he said while campaigning in New Hampshire. But now Clinton—even though she won by only a few thousand votes—has flipped it back. And the new narrative is again the old narrative. Their Election Night speeches reflected the fundamental divide of the race. Obama declared, “The reason our campaign has always been different…is because it’s not just about what I will do as president…. It’s about what you can do to change” the nation. Clinton proclaimed, “It’s time we had a president who stands up for all of you.” He was still selling a movement; she was still selling herself. The primaries ahead will show who has a better sense of the market—and, just as important (as New Hampshire reminded all), who has a better delivery system.