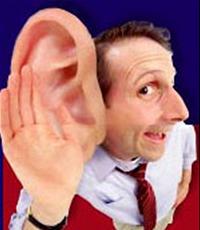 Last week, Rolling Stone posted an extensive (6 online pages!) diatribe against sound quality in the age of mp3s. The article seems to have two, somewhat related points: a) that music is being mastered really loud these days, and b) mp3s sound crappy. RS posits that these two factors have become a kind of self-reinforcing spiral of doom for audiophiles, a “global loudening,” if you will:

Producers also now alter the way they mix albums to compensate for the limitations of MP3 sound. “You have to be aware of how people will hear music, and pretty much everyone is listening to MP3,” says producer Butch Vig, a member of Garbage and the producer of Nirvana’s Never- mind. “Some of the effects get lost. So you sometimes have to over-exaggerate things.” Other producers believe that intensely compressed CDs make for better MP3s, since the loudness of the music will compensate for the flatness of the digital format.

Hey, Garbage is still around? Okay, sorry, that was low, I liked that band. Anyway, I have to say I’m of two minds on this topic. Yes, the radio-style super-loud mastering that’s de rigueur these days can be overdone, and I’ll be the first to admit a 128 kbps mp3 can have crunchy high end and flat bass. I’m one of those guys you hear about who still buy vinyl records for their rich, live sound, and even if I’ve purchased mp3s I’ll go buy the CD too if I really like it, just for audio quality’s sake. So, technically, yes, Rolling Stone is right, but I think they’re forgetting how things work in the real world.

First of all, let’s talk about the aesthetics of “loud.” Typical FM radio compression squashes the crap out of songs, for sure, but sometimes that enhances the music, allowing you to hear parts that slipped past you before. Radiohead’s “Optimistic,” a guitar-led track from 2000’s Kid A, seemed kind of flat and unremarkable on the CD, but on the radio it took on new life, gaining a thumping intensity and power. I seem to remember Thom Yorke said as much in an interview (still looking for that source). Daft Punk’s classic Discovery album uses hyper-compressed samples to evoke a nostalgic ’70s radio sound: the “super-flat” style is the whole point. Moreover, with radio getting more conservative and marginalized, people hear original tracks first on the internet (or their friends’ iTunes playlists) more than ever; so if an artist wants that sweet radio compression, it has to be built in. One of Rolling Stone‘s list of poorly-produced CDs, Lily Allen’s Alright, Still, is a perfect example of this: she gained fame on MySpace, her music is populist but sits uncomfortably between most American radio formats, and its almost-distorted volume gives the album a kind of punk intensity.

Quality-wise, sure mp3s can suck, but think about how most people have listened to music in the Rock Era: dusty 7″ singles, AM radio, warped cassettes that sit on the floor of your Mazda. I’ll gladly take an mp3 from my iPod, plugged directly into the car stereo, over any of those. Secondly, all musical formats until how have been limited by, well, physical attributes; the initial point of mp3s was their smaller size, but with faster internet speeds and bigger hard drives, 256 kbps mp3s (which most listeners can’t distinguish from CDs) are becoming more and more common. As technologies change, mp3s can change with us, with better-quality files available for those who want them.

Ultimately, the average listener is probably experiencing more music at a higher quality level than at any time in the rock era. And yes, thankfully, most albums are still being released on vinyl, so old fuddy-duddys like myself (and Rolling Stone writers) can continue to wonk out on super-high-fidelity.