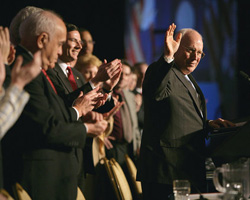 Dick Cheney kicked off the three-day Conservative Political Action Conference (CPAC) last week with a preemptory analysis of President Bush’s legacy. It was a speech chock full of the self-serving misrepresentations the American public—which now rejects Bush’s leadership by a huge majority—has come to expect from the administration. But this was CPAC, an annual gathering of hard-core right-wing activists from across the country who are, in Cheney’s words, “the heart and soul of the conservative community.”

Attendees cheered when Cheney said that President Bush “faces challenges squarely” without “passing them on to future generations”— ignoring the ongoing war in Iraq and the record deficit that will be created by the president’s latest budget. Cheney claimed that letting the Bush tax cuts expire would be one of the “largest government money grabs in American history” because it would supposedly raise taxes an average of $1,800, even though the vast majority of American taxpayers wouldn’t see anything close to that tax hike. Cheney got a standing ovation when he insisted that the administration’s overseas interrogation program (the program that introduced rendition, black sites, and “we do not torture” into our national vernacular) has obtained important and useful information. At one point during the speech, the audience chanted “Four more years!”

Later, while the crowd waited for Mitt Romney and John McCain to speak, a conservative book seminar began, and panelists extolled the virtues of Barry Goldwater’s Conscience of a Conservative and Ayn Rand’s Atlas Shrugged. “The heroes of Atlas Shrugged were businessmen! Absolutely astonishing!” said Edward Hudgins, executive director of the Atlas Society, an organization that champions Rand’s philosophy of “rational, principled individualism.” Rand, Hudgins said, instructed her readers to protect their lives, their privacy, and their businesses as they protect their children. “How would you feel if the government decided to molest your children?” he asked.

Over the course of day one, Mitt Romney dropped out of the presidential race and John McCain got booed. (Other things that got booed: Keith Olbermann, France, universal health care, and the idea of a “living Constitution.”) The candidates’ appearances have been well-covered elsewhere, so I’ll only mention that many attendees told me that they will refuse to vote for John McCain, seeing him as not conservative enough. One young man, who must have been born in the late ’80s, said that he would write in Ronald Reagan’s name.

Griping, in fact, was a major activity at the conference. The fact that a supposed false conservative was about to don the mantle of the Republican Party was irksome enough, but there were also Hillary Clinton, Hollywood, and the liberal media to contend with. Right around the corner, it seemed, waited a welfare/nanny state, attacks from radical jihadists, and a legion of activist judges determined to pervert American society.

And then there are immigrants. After McCain’s speech, a man handed out flyers to audience members as they exited the auditorium. “Amerixianada?? Meximerianada??” it read. “Whatever they might call it, we must STOP the gradual, planned merging of America with Mexico and Canada.” I asked the man what he thought about John McCain. He snorted. I asked him who he would vote for. “Maybe a third party,” he said. “Someone who will really secure the borders.” As we were talking, a glowering, heavyset gentleman glanced at the flyer and stopped in his tracks. He poked the man I was speaking with in the chest. “Unless white people like you start having more children, you can kiss this country goodbye,” he said.

Day two started with President Bush’s address to the conference at 7:15 am. Doors opened at 5 a.m., and attendees stumbled into the ballroom bleary-eyed but excited. At the front of the room, a young man named Dayton sat next to a row of sleeping college students. I asked him how early he and his friends had gotten in line. “Oh, about 3 a.m.,” he said cheerfully. “A lot of people just stayed up.”

During his speech, the president ticked off his accomplishments, but concluded by insisting that he isn’t concerned with his legacy because “history’s verdict takes time to reveal itself.” Bush’s speech, like Cheney’s, received chants of “Four more years!”

“I think President Bush has been a superb president, probably the best in history,” Frances Rice, chairman of the National Black Republican Association, told me afterward, when I asked her whether she would prefer another Bush term to a potential McCain administration. “I have not been a supporter of John McCain, but if he is our nominee I will definitely support him.”

Another attendee told me, in reference to McCain, that the worst Republican is better than the best Democrat.

Later, I wandered into the CPAC exhibition hall, a good place to take the pulse of the CPAC crowd. It is the only space in the convention not stage-managed by the event’s media-savvy organizers. There, attendees could purchase every book ever written by Ayn Rand and Ann Coulter, or, if they were in the mood for less weighty fare, the Politically Incorrect Guide to Islam. They could buy a Hillary Clinton bobblehead, featuring Hillary’s face mounted on donkey’s body, or bumper stickers that said, “Press 1 for English, Press 2 for Deportation” and “KFC Hillary Special: 2 Fat Thighs, 2 Small Breasts, Left Wing.” There was also a t-shirt that read, “I’d rather be waterboarded than vote for John McCain.”

A booth staffed by a friendly young man working for an anti-abortion group called the American Society for the Defense of Tradition, Family and Property, offered a flyer entitled “10 Reasons Why Abortion is Wrong.” Number nine: “Addressing an abortionist. Once you were an enchanting child, as all babies are. Today you are an abortionist, a killer of babies. Do you not regret your wicked deeds? Do you not see the innocent blood of our children that stains your hands and cries out to God?” And an organization called America’s Majority offered literature aimed at college students giving tips on how to “Defeat Radical Islam on YOUR Campus.”

Unlike the speaking venues, which were crawling with reporters, the exhibition hall was primarily filled with conference attendees from around the country. I asked John Curry from Virginia for his take on the Democratic candidates. “Hillary is just a criminal, that’s all,” he said. “A criminal. She just wants to get back in the White House so she can steal the rest of the furnishings.”

What about Obama? “I think if Obama becomes the obvious frontrunner, he will meet with a horrible accident like the other people that have perished because of the Clinton’s animosity towards him. He’ll be offed,” he said. He paused. “Also, he doesn’t have the experience to run this country.”

During a 15-minute conversation, during which Curry managed to use the words “pakis,” “japs,” and “sandniggers,” he delivered a lengthy discourse on the fallacy of global warming, blaming climate change on ice age cycles, sun spot activity, and the currents of the Artic Ocean reversing directions.

On a television screen nearby, former U.N. ambassador John Bolton was wrapping up a foreign policy presentation, claiming that the administration has proof that North Korea is assisting Syria with a nuclear program. (For evidence to the contrary, read Seymour Hersh’s latest piece in the New Yorker.)

Next on the conference agenda was a panel discussion on the “Future of the Life Debate,” headlined by Wendy Wright, president of Concerned Women for America; Nigel Cameron, president of the Institute on Biotechnology and the Human Future; and Representatives Trent Franks (R-Ariz.) and Lynn Westmoreland (R-Ga.). Wright spoke first, claiming that the world is awash in contraceptives—and that global family planning efforts are hopelessly ineffective because people in Third World countries are simply not using them. In the Philippines, she said, there are so many birth control pills that people use them to fertilize their orchids; in India, people use their extra condoms to waterproof roofs. She also suggested that Roe v. Wade “demands” sex selection abortion.

Cameron, speaking on how new technologies challenge the “culture of life,” told the audience that scientific advancements giving people more information about their unborn children will create a “new eugenics,” that will grade people on a number of different criteria, including intelligence and physical fitness. He also made references to potential technological developments that currently exist only in science fiction novels, such as blurring the human/animal line and downloading the human consciousness onto a computer hard drive. After Cameron’s presentation, Trent Franks’ remarks comparing abortion to the Holocaust and to slavery seemed relatively mild.

Later that day, Ann Coulter, who’d previously pledged to throw her support behind Hillary Clinton if McCain became the Republican nominee, told a room full of college students that Barack Obama’s only notable achievement was “being born half-black” and that John McCain’s greatest accomplishment was getting captured by the Vietnamese. “I know plenty of Republican POWs,” she said. “We’re not going to make them all president.” Coulter got a huge round of applause when she advocated torturing terrorists. Afterward, I asked a young attendee named Katie about the “I want Ann Coulter” sticker she was wearing. “I love Ann Coulter,” she said. “I think she’s a role model for young women.”