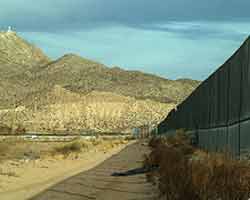 Last Thursday, in a sweltering second-floor room in the Rayburn House Office Building, a man sat quietly amidst a subdued crowd of congressional staffers, military officers, and think tankers, biding his time as members of the Subcommittee on the Western Hemisphere slowly filed in. The hearing began late, and as subcommittee chairman Rep. Eliot Engel (D-N.Y.), delivered his opening remarks, the man broke his silence. “Helicopters and guns are not the answer!” he screamed, continuing his protest as Capitol Police escorted him out. Engel, visibly annoyed, brushed the disturbance aside—”he’s disrupted many of our hearings before”—but the protester’s cries captured perfectly the question before the subcommittee that day: whether a proposed multiyear, billion-dollar security assistance package for Mexico has any chance of slowing the flow of illegal drugs into the United States. Despite hours of testimony from the administration’s chief drugbusters, that question remained unanswered.

First discussed last March at a summit meeting between President Bush and his Mexican counterpart Felipe Calderón, the Mérida Initiative—named for the Yucatán city in which it was negotiated—was developed in secret over the ensuing months, without consultation with Congress, and was announced last October by the U.S. State Department as “a new paradigm for security cooperation” in the drug war. The plan envisions $1.4 billion in military equipment and training for Mexico’s drug interdiction forces over three years, including eight Bell 412 helicopters, two CASA CN-245-300 surveillance planes, eighty-seven ion scanners used for drug detection, night vision gear, and sophisticated electronic inspection equipment. It would also fund software to facilitate cross-border intelligence sharing, forensics systems for identifying smuggled firearms, immigration document verification systems, and human rights and anti-corruption training for Mexican police.

However, beyond this broad outline the details of how the Mérida Initiative would work remain largely unknown—something that gave members of the subcommittee pause as they listened to testimony from the nation’s leading drug warriors, including officials from the White House Office of National Drug Control Policy, the departments of State and Homeland Security, and agents from the FBI, the Drug Enforcement Agency, and the Bureau of Alcohol, Tobacco, and Firearms. Throughout the morning, the witnesses competed to demonstrate the skill and determination with which their respective agencies have dealt with the drug problem. Scott Burns, deputy director of the ONDCP, lauded a recent increase in the street price of cocaine as evidence of success. DEA intelligence chief Anthony Placido heralded recent drug seizures by Mexican police as unprecedented, demonstrating “a real commitment” by the Mexican government. ATF assistant director William Hoover spoke excitedly of a new “eTrace system,” which tracks the flow of illegal firearms across the border.

All this, though, was not enough to quash skepticism from subcommittee members, including Engel. Pointing to a $73 million funding decline in next year’s proposed federal budget for drug treatment programs (the “demand” side of the counter-drug equation versus the “supply” side Mérida would target), Engel said, “It’s just not convincing to me to have the administration cut funding at a time when we’re saying that we’re having a grand initiative.” His Republican counterpart, ranking member Dan Burton (R-Ind.), also expressed his dissatisfaction. “I’ll bet I’ve been to several hundred of these hearings, and I get so frustrated because we come up with new ideas and new approaches, and the problem never goes away.” Burton then characterized his own prescription for success. “We’ve got to go after them like we did when we went after Pablo Escobar”—the legendary Colombian drug lord—and “…put the fear of God into every single one of them.”

But comparisons with previous counter-drug efforts in Colombia are precisely what the Mérida Initiative’s advocates hope to avoid. Critics have labeled the program “Plan Mexico” in reference to the controversial Plan Colombia, a multibillion-dollar aid package to the government in Bogotá, first negotiated in the late 1990s. Opponents say the Colombia program, which includes the direct participation of U.S. military advisors and private contractors, is not so much concerned with combating drug trafficking as it is in funding Colombian military operations against the FARC, a Marxist guerilla group that controls large swaths of the Colombian jungle. “We continue to put in lots of money, despite every evaluation that it’s had no impact on the flow of drugs into the U.S.,” said Peter Hakim, president of Inter-American Dialogue, a D.C. policy outfit, speaking at an academic conference on the Mérida Initiative held on Friday at the Woodrow Wilson International Center for Scholars.

Mérida’s supporters are quick to point out that the program does not include a U.S. military component and will provide equipment and training rather than cash payments, making it more difficult for U.S. contributions to be diverted for nefarious purposes. These assurances speak to what Jorge Chabat, a professor of international affairs at Mexico’s Center for Economic Research and Teaching, who spoke at the conference, characterized as “a historical lack of trust in Mexican police forces coming from the U.S.” Indeed, the drug cartels’ penetration of Mexican law enforcement and government at virtually all levels is legendary. But according to Chabat, the very existence of the Mérida Initiative signals that, “for the first time in many years, it seems, this pattern of mistrust is being changed.” Hakim sees it differently. Mérida, he said, “is a response not to greater trust, but greater urgency.”

That urgency is, at least in part, a result of the unintended consequences of “success.” With Felipe Calderón in office, Bush administration officials believe they have a rare opportunity to pursue the drug war south of the border in a way undreamt of during previous Mexican regimes. And in some respects, progress has been made. Since taking office in December 2006, Calderón has come across as an enthusiastic drug warrior. He’s taken firearms away from corrupt policemen. He’s deployed 35,000 Mexican soldiers to key drug-trafficking corridors, while organizing and training a new civilian police force that will (at least theoretically) be untainted by cartel bribes and moles. He’s vastly increased drug interdictions at sea and on land. He’s jailed more than a thousand smugglers. Perhaps most importantly in terms of bilateral cooperation, he’s extradited more than 80 drug dealers to the United States, including big fish like Francisco Rafael Arellano Félix and Osiel Cardenas, the alleged leaders of the Tijuana and Gulf cartels, respectively, two of the country’s largest and most powerful criminal organizations.

The result of this counter-drug offensive has been unprecedented violence, even by Mexican standards. An estimated 4,000 Mexicans have been killed by drug violence in the last two years (by comparison, 1,723 U.S. troops were killed in Iraq over the same period), as lower-level cartel bosses have battled each other for possession of drug routes vacated by extradited cartel leaders. The killing has spread to previously “safe” cities like the resort haven of Acapulco and the capital, Mexico City. Cartels have sought to one-up each other with ever-more gruesome murders in which victims have not only been killed, but dismembered, their heads exhibited on pikes or thrown into crowded discos.

For all this, the flow of drugs northward across the border has continued unabated, and this will likely remain the case as long as U.S. demand remains high. The Mérida Initiative’s focus on suppliers might cramp the cartels’ operations temporarily, but, as subcommittee member Rep. Gregory Meeks (D-N.Y.) remarked, “the routes change…you can close one, and another will open up.” It’s a phenomenon John Bailey, a professor of government at Georgetown University, calls “the balloon effect”—you apply pressure to a balloon and the air inside simply shifts to a new location.

This is not to say that the Mérida Initiative isn’t a step in the right direction, said Chabat, but “if somebody expects it is going to end drug trafficking, no way.” The best possible outcome, he says, is “the atomization of the big cartels… something like what happened in Colombia.” After all, the days of Pablo Escobar are long past, and drug violence in that country has declined. But it’s worth noting, he said, “Colombia now produces more cocaine than ever.”