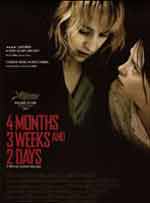 The film 4 Months, 3 Weeks, and 2 Days, which tells the story of a woman who helps her friend arrange to have an illegal abortion in Romania in 1987, is an incredibly tense movie-going experience. Its dark, gritty images—and the raw emotions that they invoke—have lingered with me for days after seeing it.

Unlike the much-talked about Juno, which turned the topic of unwanted pregnancy into a fun, snarky journey with a happy ending (and cute little acoustic love songs), 4 Months‘ handling of the topic is devoid of smiles and wit. The film chronicles one dark day in the life of the two protagonists—and in that one day, we come to realize that the young women’s lives will be forever changed by this abortion, and a series of botched plans related to it (not enough money to pay for it, forgotten ID cards, invalid hotel reservations, missed phone calls).

The film reminded me a little bit of 2002’s Irreversible, a harrowing, graphic French film about a woman’s rape told in reverse chronological order. Although one film is about abortion, and the other rape, both attempt to aesthetically deconstruct taboo issues rather than take a political stance on them. Cinematically, both are a bit surreal—and visually captivating. But unlike Irreversible, 4 Months does not have scenes of actual physical violence. Instead, it conveys fear, panic, anticipation, and stress through long moments of silence, sparse dialog, and close-up, hand-held camera work. Seemingly inconsequential sights and sounds, like ringing telephones, empty hotel front desks, pedestrian walkways, and people talking at a dinner table, help create such anxiety and suspense that I could hardly sit still in my seat. I felt what the two main characters were feeling, as they were feeling it. And it wasn’t easy.

In order to have her illegal abortion, Gabriela “Gabita” Dragut has to pay a man she’s never met before, who has the necessary medical equipment—and willingness—to perform the procedure, in a hotel room. In addition to money, he also demands that her friend sleep with him as additional payment. And then there are the more universal ordeals that go along with an unwanted pregnancy: dealing with confused boyfriends and clueless parents. All of this is set against the dank, dreary backdrop of a communist Romania: Fluorescent light bulbs flicker endlessly in hotel lobbies, streets are wet and empty, and taxis never come. Hotel clerks and bus ticket-checkers are rude and lazy, and no one is allowed to go anywhere without proof of identification.

To see this film is not to be entertained. It is designed to challenge, provoke, and leave you somewhat exhausted. But this is an emotionally resonant, provocative film that may not be fun to watch, but it is deeply affecting—and a fascinating piece of cinema.