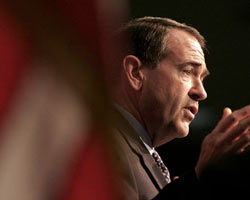 WASHINGTON D.C. — The conventional wisdom that began emerging yesterday evening, even before all of Super Tuesday’s votes had been cast, was that Mike Huckabee’s wins in the South were something of a coup for the former Arkansas Governor. Chris Matthews called Huckabee’s five Southern victories – he won zero states in the rest of the country – a “stunning development.” The New York Times wrote that Huckabee “revived his candidacy with a surprise string of wins in the South.” Mitt Romney didn’t reveal any shock publicly, but must have felt it in his more private moments: he had spent weeks treating Huckabee like a sideshow.

One has to wonder what these folks were thinking. Let’s review the facts. Mitt Romney is a loafer-wearing country clubber from Massachusetts whose family is from Michigan. He has never served in the military and is a member of the Mormon faith. John McCain is a southwestern Senator who has called evangelical leaders “agents of intolerance.” He is notoriously unsuccessful among the most conservative members of his party, most of whom reside in the South. Mike Huckabee on the other hand is a former Southern governor and former Baptist preacher. He is the strongest and most consistent advocate for “values voters” left in the presidential race.

These facts alone should have made Huckabee the obvious frontrunner in the states he won – Alabama, Arkansas, Georgia, Tennessee, and West Virginia (he lost Missouri, a border state, to John McCain by one percentage point). In fact, in my discussion of how the rules of awarding delegates hurt Mitt Romney, I pointed out that if Romney took a close second to McCain in the moderate coastal states and he took a close second to Huckabee in Southern states, he would win almost no delegates. Though I was incorrect to assume Romney would contend seriously in many of these states, I was correct to assume that Huckabee would lock up the South.

And before we get carried away with Mike Huckabee’s chances, let’s stop to ask a key question: Where does the Huck go from here? As I mention above, Huckabee didn’t win a single state outside the South. Exit polling from almost every primary held thus far shows that Huckabee polls in the single digits among non-Evangelicals. On February 9, Kansas, Louisiana, and Washington state hold their Republican primaries, meaning Huckabee has a chance to win one state. Three days later he has a shot at Maryland and Virginia. Then there’s a string of non-Southern primaries before the candidates get to the March 4 contest in Texas. If Huckabee wins three of these states, which is no sure thing, he will be winning one state for every two or three of his opponents. It’s a plan that simply cannot be sustained.

But if Huckabee is in bad shape, Romney may be in worse. He won six states on Super Tuesday, none of which were in the largest nine, delegates-wise, being contested by the Republicans. His base of support was the West: he won Colorado, Montana, North Dakota, and Utah. But his argument that he is the true conservative in the race relied on him winning the South, the bastion of conservatism in America. He was unable to win a single Southern state, and only finished within a half dozen points of Mike Huckabee in two of them.

But neither Huckabee nor Romney are going anywhere. Or so they claim. “I think there are some people who thought it was all going be done tonight,” Romney told supporters last night, “but it’s not all done tonight. We’re going to keep on battling. We’re going to go all the way to the convention, we’re going to win this thing, and we’re going to get in to the White House.” Those are strong words for a candidate who will wake up tomorrow badly behind in the delegate count. But losing as badly as Romney did yesterday – and remember, though Romney won a decent number of states, he won zero large ones – would create a possibly fatal hurdle for many candidates that won’t exist for Romney: money. Romney doesn’t have to worry about his campaign chest running out, because he can always reach into his wallet and fill it up again.

A cautionary note on Romney’s future prospects: MSNBC reported last night that Romney’s senior staff will meet the former Massachusetts Governor Wednesday for “frank discussions” about the future of the campaign. Apparently, campaign stops scheduled for later this week have been cancelled. This may mean everything. It may mean nothing.

As for Huckabee, he made it sound in his speech yesterday like his campaign is ascendant. “Tonight we’re proving that we’re still on our feet, and much to the amazement of many, we’re getting there,” he said. “We’re getting there.”

I suggest that Huckabee did exactly as well as he should have — he did not outpeform accurately calibrated expectations. In fact, the fact that Huckabee couldn’t win a state in the Midwest, the Northeast, the Rocky Mountain region, or the West further shows how much of a niche candidate he is. If there was a Huckaboom yesterday, it will be followed very closely by a Huckabust.