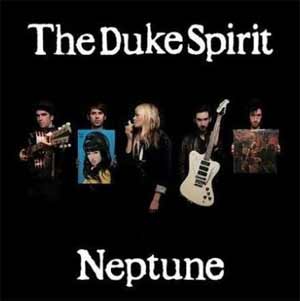 Okay, I have to clear my head of all that Grammys negativity by talking about something good. The Duke Spirit hail from Cheltenham, England, a “spa town” off in the west by Bristol; it’s a little isolated, and their sound is too: a kind of throwback to ’90s grunge with a liberal helping of Queens of the Stone Age-style riffs. Their first album, 2004’s Cuts Across the Land, was an underappreciated gem of fuzzy, bluesy rock, made even more unique by lead singer Leila Moss’ chiming voice. Critics compared them to PJ Harvey or Patti Smith, but more than anything they reminded me of Salt, another underappreciated female-fronted hard-rock band who had a minor hit in ’95 with “Bluster.” In any event, The Duke Spirit seemed mysteriously, intriguingly out-of-sync.

On Neptune, they may be trying to catch up with the times just a little. The band went to QOTSA producer Chris Goss’s studios in the Southern California desert to record, and there are some eyebrow-raising similarities to recent Queens material, like the repeated single piano note over the top of “Send a Little Love Token.” Sorry, but that sounds a lot like “Go With the Flow.” When the Duke Spirit focus on their own, murkier take on the blues-rock sound, the results are much more satisfying: “The Step and the Walk,” with its chilly harmonies, combines the unrest of Sonic Youth with the propulsion of Soundgarden, and “Dog Roses,” with its mellow triple-time strum and delicate piano melody, could pass for an interlude on a Dungen album.

The album opens with a strange, acapella choir, repeating the line, “I do believe in something, you know.” It’s a spooky moment, even for a band who seem to be waging an internal battle between clarity and inscrutability. As such, Neptune can, at times, sound a little too familiar. But when the band forge their own way deeper into the darkness, the sound is revelatory, stepping outside genre to remind us how great rock can be. On “My Sunken Treasure”‘s majestic coda, Moss sings she’s “swimming to get you.” The god of the sea shows up explicitly more than once here, and the album’s hypnotic swells are definitely oceanic. However, it may be Neptune’s planetary namesake that’s this album’s true spiritual brother: huge, chilly, and nearly off the map, you may find yourself pulled in by its unexpected gravity.

Neptune is out now on Shangri-La Music.