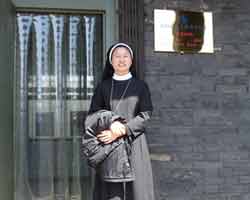 The gray plaza in front of Shenyang’s century-old gothic cathedral is largely abandoned on this Sunday morning, the church’s twin spires separated from a bustling shopping district by a crusty wrought-iron fence that does nothing to keep out the thump of Chinese hip-hop blaring from nearby storefronts. From a bunker-like convent beside the cathedral, the Catholic seat of northeast China’s Liaoning Province, a nun in a calf-length habit rushes toward me. Sister Fabian Han Fengxia, 36, wears wire-rimmed glasses and a shiny silver medallion that signifies her place among the diocese’s community of 93 nuns. “We are very busy these days,” she says, firmly shaking my hand. “Many new clients.”

These particular clients are 68 mostly gay HIV-positive residents of Shenyang, an industrial metropolis of 7 million people. “The gay community is where the disease is here,” she tells me. “So we work with them.” Sister Fabian directs a program that provides all manner of support for HIV-positive men and women, such as emergency funds, job training, medical services at the diocesan clinic—and even house calls. Though most of the clients are in Shenyang, Fabian and the other sisters also tend to a rural village of farmers infected during a blood collection drive in the 1990s. Officially, it’s estimated that there are more than 650,000 HIV-positive people in China (unofficially, the number is thought to exceed 1 million), with Liaoning home to 3,000 of them, according to Fabian. China’s Ministry of Health says that between 2.5 and 6.5 percent of China’s gay men are infected, and the number is growing; these days, the ministry records an average of 3,000 new cases per month.

While it’s not unusual for the Catholic church to assist HIV-infected men and women—according to the Pontifical Council on Health Care, Catholic organizations provide a quarter of HIV-related services worldwide—it’s quite unique that a church should work so closely with an organized gay community. Such alignments are rare in other parts of the world, where Rome’s canonical view of homosexuality as “contrary to the natural law” often sets the agenda. Yet in China, where the church was persecuted and cut-off from mainstream Catholicism for more than half of the last century, a more progressive and independent perspective has arisen. Fabian is certainly aware of Rome’s views. But she says she is unmoved by the prejudices of others. “We help whoever needs our help,” she says. “We don’t differentiate between gay men and poor farmers.”

Fabian leads me to a cramped, cubicle-divided, fluorescent-lit office where her two assistants, Sister Catherine and Sister Peter, report that a client is having difficulty applying a salve to sores on his back. “He uses a chopstick to do it because he can’t reach,” Fabian sighs. “He doesn’t want his family to know that he is sick.” Later that afternoon, she will ride her bicycle for an hour to his home and help with the medicine. In China, AIDS is highly stigmatized—associated as it is with sex workers, drug users, and those of generally low character—to the point where it’s often impossible even to discuss with blood relatives. The three sisters all know of families broken apart or ostracized after an HIV-positive diagnosis. When Fabian took the helm of the diocese’s program in 2005, she and the other sisters struggled with their own prejudices against gay men. “We all thought they had a psychological problem or something bad happened in their family that changed their sex behavior,” she explains. “But time after time, you begin to understand and love them. Really love them.”

Raised in a non-religious family, Fabian joined the convent at age 21 after she “ran away” from a dead-end sales job in 1992. “I didn’t know anywhere else to go,” she laughs. The sisters offered to send her to medical school and in 1996, after graduating with honors, she established a clinic for Shenyang’s priests and sisters. Two years later, she expanded the clinic to provide free services to the city’s poor. “Perhaps that’s a calling,” she remarks offhandedly. When pressed to explain further, she snaps, “Maybe you think I’m a lovely person, but my colleagues think otherwise.” Referencing a deep strain of impatience and a quick temper, she finally adds, “I do it because I love the people.”

In 2003, with the help of the Catholic Maryknoll order in New York, Sister Fabian enrolled in a two-year course at Fordham University and earned her Masters of Arts in pastoral care. Not long after her return to China, the diocesan leadership placed her in charge of its AIDS program which, at that point, lacked clients from Shenyang’s gay population. “At first,” Fabian says, “they were suspicious of us because of what they’d heard about the Church in the past.” But with the assistance of Sisters Peter and Catherine, she aggressively pursued a relationship. She offered frank advice on risk prevention, speaking to any group or meeting that would have her, and perfected what appears to be the city’s first and only HIV support groups, where clients discuss practical topics such as nutrition. “They don’t really share their feelings or their conditions,” she explains. “It’s not very Chinese to do so.” The turning point for the program came in late 2005. A man dying of AIDS had been abandoned by his family and was alone. So the sisters cared for the man, and after his death, washed and prepared his body for the funeral. “From that point,” Fabian says, “trust developed. We became very close.”

Now, HIV-positive people who can’t or won’t go anywhere else seek out Sister Fabian, who is known to be not only sympathetic but adept at negotiating China’s formidable medical bureaucracies (though illegal, many healthcare facilities refuse to treat HIV-positive patients). Two years ago, in cooperation with Shenyang’s two largest gay-rights organizations, Fabian arranged to have 250 men tested for HIV at a remote site, and though she concedes that “the only ones who came were those who wanted to prove to their partners that they didn’t have it,” she is proud of the accomplishment. In August, when a destitute gay man in Dalian was dismissed from his hospital bed because of his HIV-positive status, Fabian arranged for and even financed his treatment from her program budget. “I asked the [Dalian] gay community leader to come with me,” she recalls. “And he did,” making for an unusual paring in modern China.

After spending the afternoon in Fabian’s office, viewing a formidable collection of slides and documents, she and I walk to Changzhi’s Farmer Food, a tiny restaurant dominated by a plastic tree trunk and hanging branches so that it resembles a tree house. Fabian orders a large bowl of tofu in a salty sauce, spicy eggplant, and mushroom soup. In speaking of Chinese religious life, she says solemnly, “The roles for sisters are changing so fast. It makes it hard to know the proper course.” When we can’t finish the food, she asks for boxes. “So much pressure these days,” she offers. Later, at the cathedral gate, she gives the leftovers to the guards.