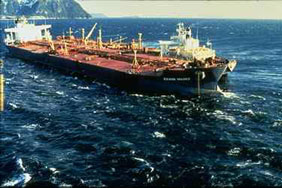 Alaska Senator Ted Stevens is a busy guy, what with the FBI raiding his house and all. But recently he took time out of his regular pork-barrel business to return to the practice of law. Stevens is a Harvard Law school grad, and was a practicing lawyer before he was elected to Congress in 1964. He recently dusted off his law books and wrote an amicus brief on behalf of Alaska fisherpeople who sued Exxon after a drunk sea captain crashed its oil tanker, the Valdez, into Prince William Sound in 1989, spilling 11 million gallons of crude oil into the delicate ecosystem.

An Alaska jury hit Exxon with a $5 billion verdict in 1994, but Exxon hasn’t paid a dime of it. Instead, it has appealed the case for so long that 8,000 of the original class members in the lawsuit have since died without seeing the case resolved, according to the Anchorage Daily News.In the latest installment of the long-running litigation, the U.S. Supreme Court agreed in October to hear the case.

Sen. Stevens has written an amicus brief in support of the plaintiffs, drawing on his vast knowledge of maritime law that includes a law review article he wrote back in 1950, which is cited in the brief, according to the Wall Street Journal. Stevens told the Journal that he didn’t think the justices would actually look up his article, but that he wanted to establish that he had some expertise in the area. “I don’t imagine the justices look at these amicus briefs that much,” he said.