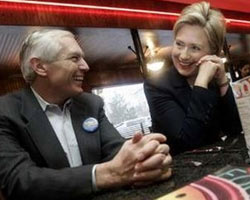 All three men said that they trust Hillary Clinton’s foreign policy judgment. Ballard repeatedly referred to the “courage of her convictions.” They criticized Obama for campaigning on a plan for withdrawing from Iraq that, according to Power, is just a “best-case scenario” that will be revised when Obama takes office and speaks with advisers. Those advisers won’t have a “magic plan,” said Clark. “It really comes down to the resolve and conviction of the president.” Ballard added that “[Clinton] has been unwavering in her commitment to withdrawal… When people vote [for her] they know what they’re going to get.”

I asked the military men on the call if they were criticizing Obama fairly. Wouldn’t they want the president to speak to advisers, including military advisers like themselves, before executing a military maneuver such as a withdrawal?

“Of course whoever is president will have the logistics done by the military,” said Clark. “But what Hillary Clinton has been very clear about is the mission. We’re going to withdraw.” That was seconded by Ballard, who said, “Consultation with military leaders is a necessary part of developing the plan and strategy, but it is ultimately the president” who gives direction.

What neither men noted is that Obama has also been clear about the mission in Iraq — he too supports withdrawal, and has said so wholeheartedly. What was revealed by Power’s statement was that Obama’s true position is essentially the same as Clinton’s (withdrawal designed through consultation with experts once in office) instead of Obama’s stated position on the stump (withdrawal withdrawal withdrawal).

There was only one other issue of note. Clinton has hinted recently at a “dream ticket” that would, presumably, put Clinton #1 and Obama #2. Simultaneously, she has hammered Obama for not having crossed the “commander-in-chief threshold.” How could she put someone a heartbeat away from the presidency if he or she isn’t ready to defend America?

Clinton’s communication director Howard Wolfson reiterated “Senator Obama has not passed the commander-in-chief test,” but added “there is a long way between now and Denver.” I asked him if he expected Senator Obama to do something between now and the Democratic Party convention in Denver that would signal his passing through the threshold. He’s just going to be campaigning from now until then, after all. Wolfson responded, “Senator Clinton will not choose any candidate who at the time of choosing who has not passed the national security test.” He then said something about “not ruling anything out” and added again that there is a lot of time between now and Denver.

So take that for what it’s worth.