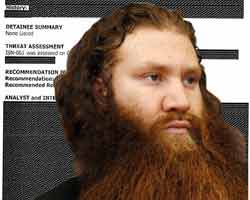 October 3: Murat Kurnaz, a 19-year-old Turkish citizen who was raised in Germany, flies to Karachi, Pakistan, where he says he plans to study the Koran.

December 1: Kurnaz is arrested by local police at a routine checkpoint near Peshawar. Days later, he is turned over to U.S. forces and taken to a base in Kandahar, Afghanistan, where he claims he is tortured.

February 2: Kurnaz is flown to the prison camp.

February 24: A senior Pentagon interrogator issues a memo saying, “This source may actually have no al-Qaida or Taliban association.”

September: The CIA issues a top-secret study suggesting a number of Guantanamo detainees are either low-level recruits or have no links to terrorism.

September 23-24: Three German intelligence agents question Kurnaz under CIA supervision. While at Guantanamo, they are informed by a CIA liaison that the U.S. has found no evidence the detainee poses a terrorist threat.

September 26: During a stopover in Washington, D.C., one of the German agents reports back to the headquarters of Germany’s foreign intelligence service, the BND, that the “USA considers Murat Kurnaz’s innocence to be proven. He should be released in approximately six to eight weeks.”

September 30: A Pentagon release form for Kurnaz is printed.

October 27: The first batch of detainees—three Afghans and a Pakistani—are released from Guantanamo. Another five are transferred out by the end of the year.

October 29: Top German officials from the chancellery, foreign ministry, and domestic and foreign intelligence agencies meet to discuss Kurnaz’s case and decide to block his return.

November 27: Then-U.S. Secretary of Defense Donald Rumsfeld approves harsh new interrogation techniques for Guantanamo detainees, including the use of “stress positions” and intimidating them with dogs.

May 9: Guantanamo’s population peaks, with 680 prisoners.

May 19: Brittain P. Mallow, then-commanding general of the Pentagon intelligence unit that investigates detainees, issues an assessment saying his agency “is not aware of evidence that Kurnaz was or is a member of al-Qaida” or that the detainee has knowingly harbored individuals who have “aided or abetted, or conspired to commit acts of terrorism.” Still, Kurnaz remains in detention.

October 9: The Red Cross issues a statement highlighting the “deterioration in the psychological health of a large number of detainees.”

June 28: The U.S. Supreme Court rules that under federal law, Guantanamo detainees have the right to challenge their detentions in the American court system.

July 2: Kurnaz’s mother files a petition in a U.S. district court challenging the legality of his detention. Similar petitions are filed on behalf of dozens of other detainees.

July 7: In a bid to appease the Supreme Court, the Pentagon creates military tribunals to review detainees’ “enemy combatant” status.

September 30: Ignoring evidence of his innocence (much of which is classified and withheld from the detainee), a military tribunal determines that Kurnaz has been correctly labeled an enemy combatant. A key charge is that he is a “close associate” of Selcuk Bilgin, “an individual who later engaged in a suicide bombing.”

January 31: U.S. District Court Judge Joyce Hens Green rules the Guantanamo tribunals are illegal. In her written opinion, she points to Kurnaz’s case as an “illustration of the fundamental unfairness of the [tribunals’] reliance on classified information not disclosed to the detainees.”

November 7: Guantanamo’s Administrative Review Board reconfirms Kurnaz’s designation as an enemy combatant. The board does not consider evidence submitted by Kurnaz’s lawyer—including proof that Bilgin, the supposed suicide bomber, is still alive.

January 13: Merkel meets with George W. Bush and presses for Kurnaz’s release amid a growing uproar over Germany’s role in his continued detention.

June 30: The Administrative Review Board reconvenes and determines that Kurnaz is no longer an enemy combatant.

August 24: Kurnaz is released and flown to Ramstein Air Base, a U.S. military installation in southwest Germany.

April 23: Kurnaz’s memoir, Five Years of My Life: An Innocent Man in Guantanamo, hits stores in Germany and quickly becomes a best seller.

December 5: The Supreme Court hears oral arguments in Boumediene v. Bush, which tests the legality of the Guantanamo tribunals. Attorney Seth Waxman, representing the detainees, uses Kurnaz’s case to illustrate his point that the system is “inadequate.”

April 1: Five Years of My Life is set to be released in the United States.