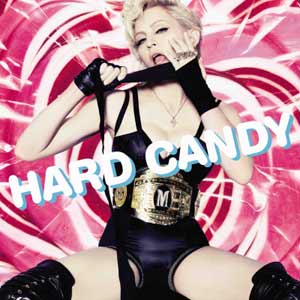 Like any self-respecting homophile dance music enthusiast, I’ve always liked Madonna. Er, let me put it more specifically: I’ve always liked her music. While her mining of the underground often seems to slightly misunderstand it (see “Vogue”), she’s one of the few artists who have combined massive success with consistent boundary-pushing. Partly as a result of her continued search for hot new producers, her output has remained compelling, even 25 (!) years after her first album. 2003’s American Life was a bit of a disappointment, but 2005’s Confessions on a Dancefloor brought producer Stuart Price to the foreground for a brilliant distillation of contemporary dance music styles. Anticipation is high for her 11th studio album, Hard Candy, set for release in April; cover art (left) and the first single (“4 Minutes”) are out now. What’s the verdict?

Well, in a word, “meh.” She’s chosen to work with superproducer Timbaland, and “4 Minutes” even features Timbaland house mouseketeer Justin Timberlake. The song is a plodding retread of the same skittery beat we heard in Timbo’s “Give It To Me.” There are almost-intriguing Baile funk-reminiscent horns tooting around, but the problem is there’s no real hook, and instead we get an eye-rolling save-the-world message grafted on:

While I’ve been a near-tireless cheerleader for Timbaland, his production skills aren’t exactly cutting edge at this point, and somehow seemed to fit better with the refreshingly-new-to-dance-pop Nelly Furtado. Madonna working with Timbaland is like, um, Helen Mirren starring in a Steven Spielberg action flick. Nothing against Spielberg, but seriously? And what about that cover art? “Hey, let’s use this out-take from the Sex book and have Jimmy in graphic design just type up the title in Arial Rounded. Done!” Sure, cover art is dead, but even the 9-pixel-wide screen on my cell phone deserves better artwork than that. Granted, Madonna will be 50 in August, so maybe her advancing age is making her insecure. It’s hard to imagine, though; with her secret yoga moves and Kabbalah chants, she’ll probably live to be 150. So what gives?

With Hard Candy also boasting Pharrell Williams on production credits, it’s worth noting that both he and Timbaland are the first black producers Madonna has spent a whole album with since Reggie Lucas and Nile Rogers on her first two albums, respectively. While I’ll reserve judgment until I hear the whole album, I worry that in Madonna’s attempt to broaden her racial and stylistic horizons to include hip-hop, she’s just picked the most popular producers around, instead of someone who could actually balance her pop instincts with progressive sounds. What about, I dunno, Danjahandz, grime producers Wiley or Mizz Beats, breakbeat producer Tayo, dubsteppers Digital Mystikz, or even a dancehall guy like Vybz Kartel? Even Swizz Beatz or Danger Mouse is edgier than Pharrell these days. If Madonna wanted to finally investigate hip-hop, great, but I wish she’d continued her tradition of looking to the underground (or even the mid-ground) for inspiration, instead of the top of the charts. But with “4 Minutes” set to bring Madonna above Elvis’ record for most Top Ten singles, what do I know?