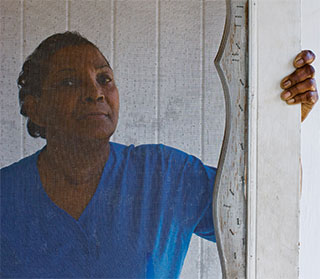 Fonza Luke had worked as a nurse for Baptist Health System’s Princeton Medical Center in Birmingham, Alabama, for 26 years when the human resources department summoned her to a meeting about a new “dispute resolution program.” Nurses, housekeepers, and lab techs crammed into a conference room where hospital administrators presented a form and told them to sign. Signing meant agreeing to submit any future employment-related complaints to an arbitrator hired by the hospital and waiving the right to sue in court. Refusing to sign meant they’d be fired.

Luke had known the arbitration agreement was coming, and she didn’t like the idea one bit—”I just think it’s unfair to be made to do something like that,” she says. So before going to the conference room, she slipped away to a pay phone and called her lawyer. He said, “Don’t sign it. You’ll be signing your rights away,” she recalls. Luke turned in the form without a signature in quiet protest. A few weeks later, the hospital again ordered her to sign, and again she refused. Despite repeated threats, the hospital didn’t fire her, at least not then.

Three years later, Luke traveled to Atlanta for a continuing-education class recommended by her coworkers. When she returned, the hospital fired her for “insubordination” because she had been cleared to take just one day off, not two. For 30 years, Luke had been an exemplary employee. Her personnel file was full of praise for her performance; a review three weeks before the firing called her a “role model.” Many of the younger, white nurses Luke worked with had taken unapproved leave, she observed, and kept their jobs. So Luke filed a race and age discrimination complaint with the federal Equal Employment Opportunity Commission (eeoc), which conducted a lengthy investigation, upheld her complaint, and recommended that Luke file a civil rights suit in federal court, which she did in 2003.

That’s when the surprise came: Baptist Health argued that Luke had given up her right to sue back in 1997 when the hospital presented the arbitration agreement—even though she’d refused to sign. Simply by continuing to show up for work, Baptist’s lawyers said, she’d agreed to the terms. Acting contrary to established contract law, which requires both parties to consent to a contract before it becomes binding, a federal judge accepted the hospital’s argument. Luke was forced to take her civil rights case before Baptist’s hired arbitrator, who dismissed it in short order. She had no right to appeal. She’d lost not only her job but, because she hadn’t yet reached retirement age, part of the pension she’d worked toward for most of her adult life. Now Luke works night shifts at two health care facilities to make up her lost salary.

You Can’t Sue Us!    Some of the companies that use arbitration clauses in contracts with employees or customers

Mandatory-arbitration provisions like the one forced upon Luke are not rare. In fact, agreements not to sue are becoming a ubiquitous facet of commercial life, governing everything from employment to used-car sales. On job-related matters alone, the National Employment Lawyers Association (nela) estimates that 30 million Americans, or roughly a fifth of the nonunion workforce, have been forced to sign away the right to bring civil claims before a judge or jury. (The practice had a moment in the spotlight recently when a kbr contractor named Jamie Leigh Jones, who said she’d been raped by coworkers in Iraq, had to take her sexual assault and harassment case to an arbitrator hired by her employer rather than a civil jury after the Justice Department failed to prosecute her alleged attackers.)

The root of the arbitration trend is an obscure 1925 law called the Federal Arbitration Act. At the time of its passage, lawmakers stipulated that it only applied to “merchants” involved in contract disputes. But in 1984, the U.S. Supreme Court ruled that Congress had created a “national policy favoring arbitration,” thus opening the door to far wider use. The decision prompted a dramatic increase in mandatory binding arbitration, which proponents claimed would help clear overcrowded judicial dockets and cut back on excessive legal expenses.

Since then, judges have used the Supreme Court ruling to legitimize and further expand the use of mandatory arbitration, even though, as Justice Hugo Black once observed, arbitrators can be “wholly unqualified” to oversee complicated cases. Indeed, private arbitrators aren’t required to follow the law or established precedent, or even issue written decisions. Many have legal backgrounds, but there is no standard dictating that they be lawyers or credentialed in any way—yet their decisions can’t be appealed.

In 1992, the California Supreme Court ruled that an arbitration decision can stand even if it is legally wrong and causes “substantial injustice.” In 2006, the U.S. Court of Appeals for the 7th Circuit declared that courts shouldn’t review arbitrators’ decisions even when they are “wacky.” Also in 2006, the 11th Circuit appellate court went so far as to suggest that people who try to challenge arbitration awards in court ought to be sanctioned. Says Cliff Palefsky, a San Francisco employment lawyer and cofounder of nela, “Courts have created the fiction that docket clearing is public policy.”

Judges have another reason to love arbitration: The growth of private justice has created for them a new and lucrative job market. U.S. district court judges earn $165,200 a year, less than some second-year law firm associates. Private arbitrators can make $10,000 in a day. Some judges now even seek coaching on how best to tailor their résumés for future arbitration jobs. Lucie Barron, the founder of Action Dispute Resolution Services in California, encourages judges to keep lawyers’ business cards for use in marketing their arbitration services to the legal community later on. The trend has become so pronounced that in December, a judge in California reportedly refused to accept a move from civil to criminal court because it would impact his ability to get a job as an arbitrator.

National arbitration companies recruit heavily among sitting judges, many of whom have at one time or another been called upon to rule in a challenge to an arbitration clause. In fact, the California Supreme Court justice who wrote the 1992 opinion allowing unjust arbitration decisions to stand now works as a private arbitrator charging $6,500 a day.

With little hope of progress in the courts, consumer advocates and employment lawyers have turned to Congress. They are banking on a bill introduced last July by Senator Russell Feingold (D-Wis.) that would outlaw mandatory-arbitration clauses in consumer and employment contracts. In December, Fonza Luke flew to Washington to testify before the Senate Judiciary Committee. Having once successfully petitioned the pope to intervene when she thought her daughter had been mistreated in Catholic school, Luke held her own on a witness panel dominated by lawyers and law professors. “I did everything I could to keep my right to go to federal court,” she told the committee, “but the courthouse doors were closed when I got there.”

Sitting down the table from Luke was Mark de Bernardo, an attorney representing employers who dubbed Feingold’s measure a “mandatory-litigation bill.” De Bernardo argued that doing away with forced arbitration would lead more people to choose court hearings and “impose a death penalty” on alternative dispute resolution in America. Yet to Feingold and others, that’s exactly the point—people should be able to choose. As F. Paul Bland Jr., a staff lawyer with Public Justice in Washington, D.C., put it, “It is a pretty grim idea that the only way you could have arbitration is to force people into it.”